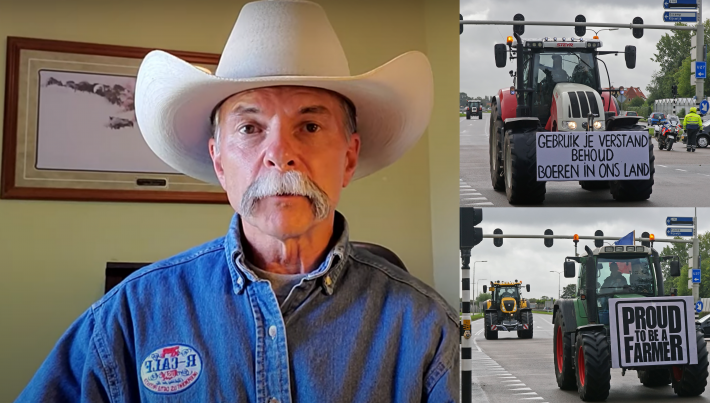 July 23, 2022 (EIRNS)–R-CALF USA, the largest association of independent cattlemen in the United States, on July 21, issued a statement of support to farmers in The Netherlands, protesting against the impossible green government mandates, to cut nitrous emissions and run-off by 2023. Bill Bullard, R-CALF USA CEO, stated, “Dutch farmers are facing an immediate threat to their livelihoods, liberty and independence. America’s cattle farmers and ranchers are on the cusp of suffering the same fate, which is why R-CALF USA supports the Dutch farmer-protestors who are fighting on the front line.” He said that the Dutch government is disregarding “any concern for reductions in food production almost certain to occur under the mandate.”

R-CALF USA, based in Montana, stands for Ranchers-Cattlemen Action Legal Fund United Stockgrowers of America, and they have led the charge in recent years, fighting in the courts, Congress and public arena, against the Big Four cartel of meatpackers which dominates 85% of U.S. beef processing—Tysons, Cargill, JBS, and Marfrig.

R-CALF USA has also exposed how the “green” agenda is used as a cover for attacking cattlemen, and cutting the food supply, as in the case of the Global Roundtable for Sustainable Beef. R-CALF USA leader Tracy Hunt, a rancher and attorney in Wyoming, has exposed the GRSB as a front group for the likes of the World Wildlife Fund, cartels, and those who want depopulation.

Bullard has stressed the particular point that his rancher group has long opposed allowing beef imports into the U.S. from The Netherlands–a big beef-exporter–or other export source nations for the world meat cartels, but R-CALF USA supports the Dutch farmers. He said, “This isn’t about trade policy. The Netherlands is ground zero for a globalized effort to control the food supply and those who produce it.”

Bullard issued a video statement on the Dutch farmers’ protest this last week, which is linked from his July 21 statement, which now is also circulating in German in Europe.