The New Silk Road becomes the World Land-Bridge: A Tour

The concept of the World Land-Bridge developed out of the Schiller Institute’s post-1989 proposals for concrete economic integration of the former Comecon states, called The Productive Triangle, which was expanded from 1991 to include Asia, then known as The Eurasian Land-Bridge. Our proposals, then as now, are intended as a real peace order for the 21st century.

Despite having all the scientific and technological means at hand to guarantee humane conditions of life, while there are over 1 billion people subject to hunger and malnourishment, while 25,000 children — a small city — die daily from hunger, while 3 billion live in poverty and are denied their human rights, is it not then our sacred duty to actually deploy those means? We need a large-scale development strategy, building on the ideas of the United Nations Development Decades of the 1950s and ’60s, rejecting completely the paradigm change of the past 40-50 years as the wrong track, and thus reviving the idea of “Peace Through Development.”

Such a vision could be the implemention of the World Land-Bridge with its many great projects like NAWAPA, the tunnel under the Bering Strait, the development of the Artic, expansion of the Eurasian Land-Bridge, above all into the Near and Middle East and the Indian Subcontinent, including linking Africa to the World Land-Bridge through tunnels, under the Strait of Gilbratar linking Spain and Morocco, and also between Sicily and Tunisia. 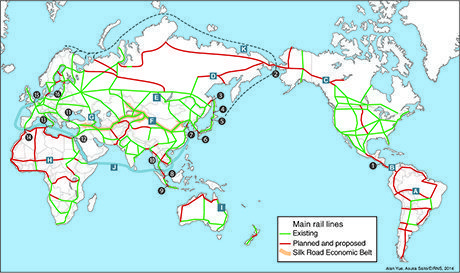 Founder and president of the international Schiller Institute, Helga Zepp-LaRouche, was interviewed by Chinese host Yang Rui at the CCTV studio in Beijing, China on April 15, 2014.

So, there is no reason why this Golden Age of the Persian and Arab Renaissance should not be revived. I mean, in the same way that European cultures are disconnected from their high points—Italy is not on the level of the Italian Renaissance; Germany is not on the level of its own Classical period; but there is no reason why not only Europe, but also the Arab, Persian, Islamic world cannot revitalize on a modern level, but by connecting with the roots of its earlier Golden Age.

There is just a tremendous lack of infrastructure and industrial development; there is almost no agriculture, because of a total lack of water. You can fly for five, six, seven hours over this area of Northern Africa and the Greater Middle East, and you can look out the window and you do not see one green spot. I did this once, and I was looking, where are the oases? And there were none!

EIR’s comprehensive study of the progress of the Eurasian Land-Bridge project which Lyndon and Helga LaRouche have championed for over 20 years, has finally been completed. The official release date is Dec. 1. The 374-page report, entitled “The New Silk Road Becomes the World Land-Bridge,” is nothing less than a conceptual, and often physical, “road-map” to a New World Economic Order.

Volume 2 of the report is now available from the Schiller Institute.

Have You Developed a Plan to Develop Some Region of our Planet?

Get In Touch Now