Live event: Peace On Earth, Or Humanity’s Doom? The Case for Negotiations 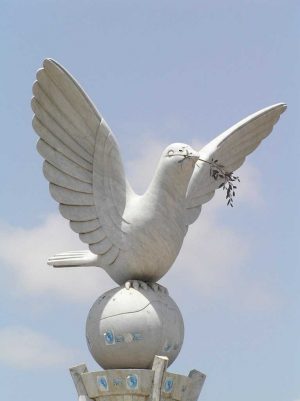 Live event: Peace On Earth, Or Humanity’s Doom? The Case for Negotiations

December 14, 2022by David Dobrodt in General

Russian President Vladimir Putin’s remarks made last Friday, Dec. 9, in the wake of former German Chancellor Angela Merkel’s admission that the 2015 Minsk Agreements regarding Ukraine were never intended to be upheld, have sent shock waves throughout the world. Putin said, “If Russia does not use nuclear weapons first, it won’t use them second, either,” and that perhaps Russia should abandon its policy of “no first use” of nuclear weapons and adopt the U.S. policy of “first strike” thermonuclear war. (The US policy, it should be noted, also allows for fighting war even against powers without nuclear weapons, and even if the United States is not attacked with nuclear weapons.)

Sleepwalkers in America and Europe should wake up. Did you know that “first use against everybody” is the U.S. policy? Do you support that? Do you know that the world has suddenly become a much more dangerous place than ten days ago.

Why? The trust between Russia and the United States/NATO has evaporated to the point that, in the words of Helga Zepp-LaRouche, winner of the 2022 Freedom of Expression Award of the national Journalists Club of Mexico, “one more step, even an unintended mistake, one misreading by one side or the other, could trigger the launching of the entire nuclear arsenals of both sides, leading to a global nuclear war, followed by a nuclear winter of about ten years, which would mean that in all likelihood not one human being would survive.” Is all of human history to be held hostage by this folly?

Join those who say no to war, those who say there is another path, that there are principles of reason and goodness that are more powerful than the hubris of failed empires. The road to peace must be paved “with malice toward none; with charity for all.” What principles must inform the negotiation process among the furiously raging nations? The Saturday symposium, open to all, is intended to discuss “where we go from here.”

Watch the livestream on schillerinstitute.com

“ One Step Away From the Nuclear Annihilation of Mankind!” by Helga Zepp-LaRouche