The Fight For Sovereignty

Your daily update from Harley Schlanger for May 20, 2022.

Webcast: This is “The Most Dangerous Moment” in Human History

At the end of a thorough review of the escalation of the war drive against Russia coming from the leaders of the bankrupt western “powers”, Helga Zepp-LaRouche stated that she believes this is the “most dangerous moment” in human history.  The relentless push against Russia, which has led top Russia security officials to state that they believe the existence of Russia is being threatened, was escalated this week with the request of Finland and Sweden to join NATO.  The western media is dominated by Russophobia.

There is resistance emerging, especially as the real reason behind the drive, the ongoing collapse of the global financial system, is hitting people hard, with inflation and shortages.  The Schiller Institute will be holding special emergency events next week, to counter the blatant lies in the propaganda war in the media, and to provide solutions.  She called on viewers to study the real causes for this crisis, and join with us to ensure that a new financial and security architecture can be created, to move the world away from destruction.

May 25 Conference: We Need a New Security and Development Architecture for All Nations, Not a Strengthening of Geopolitical Blocs

May 26 Conference: US and European Military and Security Experts Warn: The Insanity of Politicians Threatens Nuclear War

Your daily update from Harley Schlanger for May 16, 2022.

Why Sovereign Nation States Are the Key to Peace and Prosperity

Your daily update from Harley Schlanger for May 13, 2022.

May 10, 2022by David Dobrodt in General, Harley Schlanger Daily Update

Your daily update from Harley Schlanger for May 10, 2022.

Your daily update from Harley Schlanger for May 9, 2022.

Video: A Global Youth Partnership for a New Paradigm

Helga Zepp-LaRouche addresses a meeting of youth representing 28 countries on the urgent need to create a youth movement committed to ending the tragedy of geopolitics and replacing it with a New Paradigm. This meeting is a continuation of the process initiated on April 9 by the Schiller Institute with a conference committed to the development of a new international security and development architecture.

View the conference in its entirety. Read and sign our petition calling for a new International Security Architecture. 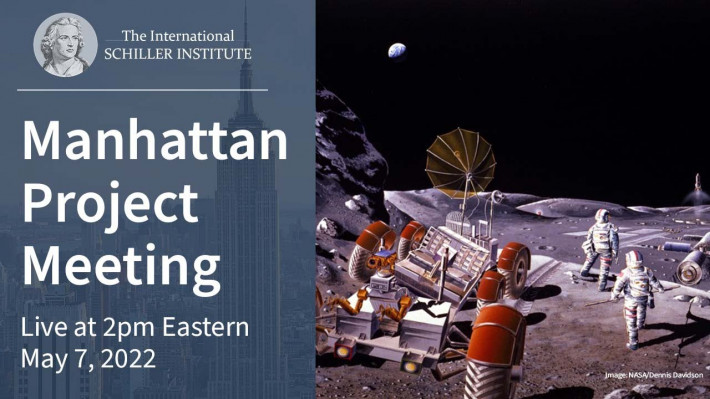 Join us Live on Saturday, May 7 at 2pm Eastern. It is said that “whom the gods would destroy, they first make mad.” But who, what, makes people sane, healthy, and productive? By what means might we reverse the clear and present dangers of the moment posed by the “Four Horsemen” —Famine, War, Disease, and the Pestilence of usury and financial speculation?

It has just been reported that “Researchers at Nanjing University investigating the soil samples brought back from the Moon by Chang’e-5, have found active compounds that can convert carbon dioxide into oxygen and fuel. In particular, they have found samples containing iron-rich and titanium-rich substances which could work as a catalyst to make oxygen using sunlight and carbon dioxide, two of the most abundant resources on the Moon.”

Carbon dioxide is not only a “resource” on the Moon, but also on Earth—ask any friendly plant. It is “madness,” largely provoked by the “gods” of pseudoscience, to concentrate on “reducing carbon dioxide” when mankind, using nuclear power, can  wield carbon dioxide as a resource. We can increase the energy throughput and energy flux-density of the planet as a whole, for all the billions of people on Earth now, and in the solar system in the future.

Your daily update for May 5, 2022 from Harley Schlanger.

Putin Tells Macron How to End the Fighting — Was He Listening to Putin?

Your daily update from Harley Schlanger for May 4, 2022.