The Inalienable Rights of Man

The following declaration was adopted on Nov. 24, 1984 by over 1,500 citizens from more than fifty countries, at the Third International Conference of the Schiller Institute. The Declaration of the Inalienable Rights of Man is based the American Declaration of Independence of 1776, with only a few changes introduced to take into account different particular features of the global struggle for human freedom and dignity today.

When in the Course of human events, it becomes necessary for the peoples in the world to dissolve the political bands which have connected them with one another, and to assume among the powers of the Earth, the separate and equal station to which the Laws of Nature and of Nature’s God entitle them, a decent respect to the opinions of mankind requires that they should declare the causes which impel them to separation We hold these truths to be self-evident: that all men are created equal; that they are endowed by their Creator with certain inalienable Rights; that among these are Life, Liberty, and the pursuit of Happiness.

That to secure these rights, governments are instituted among Men, deriving their just powers from the consent of the governed;

That whenever any Form of Government becomes destructive to these ends, it is the Right of the People to alter or abolish it, and to institute new government, laying its foundation on such principles and organizing its powers in such form, as to them shall seem most likely to effect their Safety and Happiness. Prudence, indeed, will dictate that Governments long established should not be changed for light and transient causes; and accordingly all experience hath shown, that mankind are more disposed to suffer, while evils are sufferable, than to right themselves by abolishing the forms to which they are accustomed. But when a long train of abuses and usurpations, pursuing invariably the same Object, evinces a design to reduce them under absolute Despotism; it is their right, it is their duty, to throw off such government, and to provide new guards for their future security. 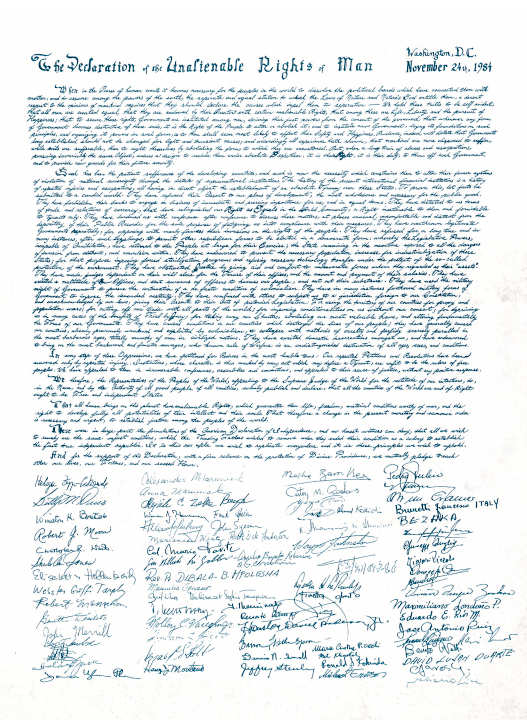 The ‘Declaration of the Inalienable Rights of Man’ was drafted and adopted by the international Schiller Institute as its founding document in November 1984.

Such has been the patient sufferance of the developing countries, and such is now the necessity which constrains them to alter their former Systems of Violation of National Sovereignty through the dictate of supranational institutions. The history of the present International Financial Institutions is a history of repeated injuries and usurpations, all having in direct object the establishment of an absolute Tyranny over these States. To prove this, let Facts be submitted to a candid world.

They have refused their Assent to our plans of development, the most wholesome and necessary for the public good.

They have forbidden their Banks to engage in business of immediate and pressing importance for us, and in equal terms.

They have dictated to us terms of trade and relations of currency, that have relinquished our Rights as Equals in the World Community, a Right inestimable to them and formidable to tyrants only.

They have burdened us with conference after conference to discuss these matters, at places unusual, uncomfortable and distant from the depository of our Public Records, for the sole purpose of fatiguing us into compliance with their measures. 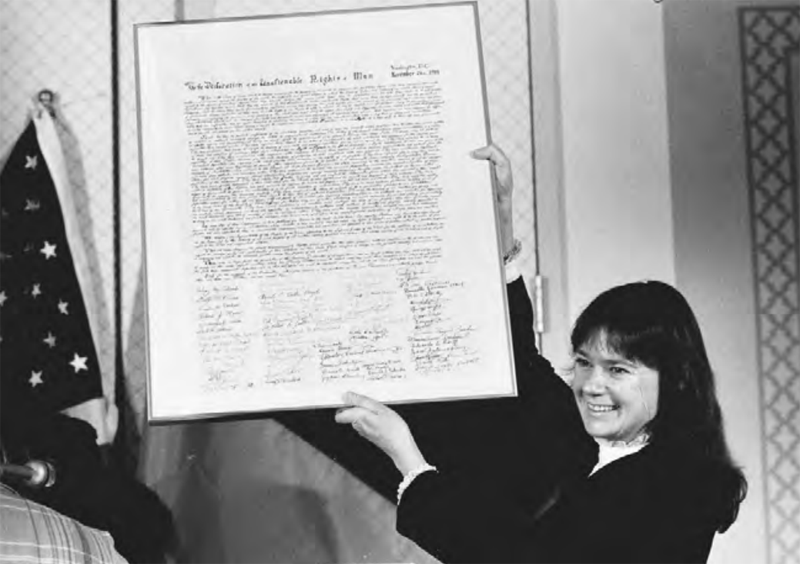 Helga Zepp-LaRouche, founder of the international Schiller Institute, holds its founding document, the Declaration of the Inalienable Rights of Man

They have overthrown legitimate governments repeatedly, for opposing with manly firmness their invasions on rights of the people.

They have refused for a long time and in many instances, after such topplings, to permit other republican forces to be elected in a democratic form; whereby the Legislative Powers, incapable of Annihilation, have returned to the People at large for their Exercise, the State remaining in the meantime exposed to all the dangers of invasion from without, and convulsion within.

They have endeavored to prevent the necessary population increase for industrialization of these States; for that purpose imposing forced sterilization programs and refusing the necessary technology transfer under the pretext of the so-called protection of the environment.

They have obstructed justice by giving aid and comfort to undemocratic forces whom they regarded as their “assets.”

They have made Judges dependent on their will alone for the Tenure of their offices, and the amount and payment of their salaries.

They have erected a multitude of New Offices, and sent swarms of Officers to harass our people, and eat out their substance.

They have used the military might of governments to pursue the continuation of a de facto condition of colonialism. They have in many instances furthered military forms of government to impose the demanded austerity. They have combined with others to subject us to a jurisdiction foreign to our constitutions, and unacknowledged by our laws, giving their Assent to their Acts of pretended Legislation:

For using the territory of our countries for proxy and population wars;

For cutting off our trade with all parts of the World; for imposing conditionalities on us without our consent;

For depriving us in many cases of the benefits of Trial by Jury;

For taking away our Charters, abolishing our most valuable Laws, and altering fundamentally the Forms of Our Governments. They have caused conditions in our countries, which destroyed the lives of our people; they have generally caused our countries, already previously weakened and exploited by colonialism, to collapse, with methods of cruelty and perfidy scarcely paralleled in the most barbarous ages, totally unworthy of Man in civilized nations.

They have excited domestic insurrections amongst us, and have endeavored to bring on the most backward and fanatic savages, whose known rule of Warfare is an undistinguished destruction of all ages, sexes and conditions.

In every step of these Oppressions, we have petitioned for Redress in the most humble terms: Our repeated Petitions and Resolutions have been answered only by repeated injury. Institutions, whose character is thus marked by every act which may define a Tyrant, are unfit to be the rulers of free peoples. We have appealed to them in innumerable conferences, assemblies, and conventions, and appealed to their sense of justice, without any positive response.

We, therefore, the Representatives of the Peoples of the World, appealing to the Supreme Judge of the World for the rectitude of our intentions, do, in the Name, and by the Authority of, all good people of all countries, solemnly publish and declare, that all the countries of the World are and of Right ought to be Free and independent States.

That all human beings on this planet have inalienable rights, which guarantee them life, freedom, material conditions worthy of man, and the right to develop fully all potentialities of their intellect and their souls. That therefore a change in the present monetary and economic order is necessary and urgent, to establish justice among the peoples of the world.

These were in large part the formulations of the American Declaration of Independence, and no honest witness can deny that all we wish to remedy are the same unjust conditions which the Founding Fathers wished to remove when they ended their condition as colonies to establish the first true independent republic. It is this example we wish to replicate everywhere and it is these principles we wish to uphold.

And for the support of this Declaration, with a firm reliance on the protection of Divine Providence, we mutually pledge to each other our Lives, our Fortunes, and our sacred Honor.

See: Declaration of the Inalienable Rights of Man

No, there is a limit to the tyrant’s power,
when the oppressed can find no justice,
when the burden grows unbearable-he reaches
with hopeful courage up unto the heavens
and seizes hither his eternal rights,
which hang above, inalienable
and indestructible as stars themselves.
The primal state of nature reappears,
where man stands opposite his fellow man.
As a last resort, when not another means
is of avail, the sword is given him,
The highest of all goods we may defend
from violence, Thus stand we before our country,
thus stand we before our wives, and before our children.

-We will become a single land of brothers,
nor shall we part in danger and distress.
-We shall be free, just as our fathers were,
and sooner die, than live in slavery.
-We shall rely upon the highest God
and we shall never fear the might of men.

Our History in Brief