CLINTEL/Schiller Institute—A Wake-Up Call: The Danger for Mankind Is Not the Climate, but Toleration of a Devious Policy that Uses Climate To Destroy Us! 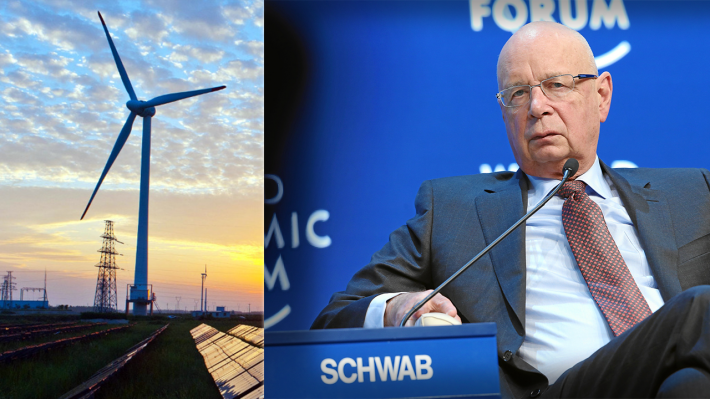 CLINTEL/Schiller Institute—A Wake-Up Call: The Danger for Mankind Is Not the Climate, but Toleration of a Devious Policy that Uses Climate To Destroy Us!

The following statement was jointly issued by Helga Zepp-LaRouche, founder of the Schiller Institute, and Guus Berkhout, emeritus professor of geophysics; initiator and co-founder of CLINTEL (Climate Intelligence).

We have bitter debates about just about everything: green energy, pandemic measures, political ideologies, tax policies, the refugee crisis, rising rents, erosion of fundamental rights, pension plans, government bureaucracies, the generation gap, women’s rights, etc. But what we fail to see is the big picture: namely, that we in the West are ruled by an increasingly powerful political establishment that is in the process of destroying everything we have built since World War II!

All the symptoms of a collapsing system are right before our eyes, if we care to see them: an economic system in which the balance between cost and benefit is totally out of balance, an accelerating hyperinflation that devours our earnings, a good healthcare system that only the rich can afford, an education system that teaches neither excellence nor moral values, an out-of-control woke culture that turns people against each other, a disastrous geopolitical confrontation policy against alleged rivals—and the list could go on and on!

All these manifestations of crisis have a common cause: We in the West are living under the dictatorship of a financial oligarchy, for which the common good is nonexistent, and whose sole interest is to maximize its own privileges. An oligarchy that needs “endless wars” to generate income for its military-industrial complex, and promotes the production and distribution of mind-destroying drugs, both illegal and legalized, the latter because the financial system would have collapsed long ago without the input of laundered drug money. And given that this system is now hopelessly bankrupt, the entire economic and financial system is now supposed to be converted to so-called green technologies in a final great coup—the Great Reset. Under the pretext of climate protection, the motto for this conversion is “Shifting the Trillions.” And it’s happening now!

The policies of the Green Deal (EU) and the Green New Deal (USA) mean that banks restrict their loans to investments in green technologies, and have long since subjected companies to an increasingly strangulating system of requirements such as taxonomy, the Supply Chain law, etc. At the same time, there is a method to the high energy prices: pushing prices above the pain threshold in monetary terms is supposed to manipulate the population into learning how to get along without meat consumption, heating, decent housing, travel, etc. This goes hand in hand with an image of man that sees every human being as a parasite polluting nature. While we know that CO₂ is essential to all life on Earth, the green policy trumpets: “The less CO₂ footprints left behind, the better.”

The truth is, this is old wine in new bottles. It is exactly the same austerity policy of Hjalmar Schacht, Germany’s Reichsbank president and economics minister just before World War II. This is cannibalization of the labor force. Whoever thinks this comparison is exaggerated, should watch the film Hunger Ward about Yemen, featuring the World Food Program’s David Beasley, or consider the death rate of children in Haiti.

What does Klaus Schwab say about this in his book Stakeholder Capitalism? He complains that African countries like Ethiopia successfully fought extreme poverty (p.154):

“It reveals the central conundrum of the combat against climate change. The same force that helps people escape from poverty and lead a decent life is the one that is destroying the livability of our planet for future generations. The emissions that lead to climate change are not just the result of a selfish generation of industrialists or Western baby boomers. They are the consequence of the human desire to create a better future for himself.”

Here it is in black and white. According to this logic, increasing the death rate by increasing poverty is the best thing that can happen to the climate! Life does not matter to the elites of Schwab.

If we want to escape the looming catastrophe, we must rebuild society completely on very different principles. This is our positive message, being a message of a hopeful future with prosperity for all:

1. Human life is inviolable. Man is the only species endowed with creative reason, which distinguishes him from all other living beings. This creative capability enables him to continually discover new principles of the physical universe, which is called scientific progress. The fact that the human mind, through an immaterial idea, is able to discover these principles, which then have an effect in the material universe in the form of technological progress, proves that there is a correspondence between the lawfulness of the human mind and the laws of the physical universe.

2. Just as the spatial expanse and anti-entropic evolution of the universe are infinite, so is the intellectual and moral perfectibility of the human mind. Therefore, every additional human being is a new source for further development of the universe and for the solution of problems on Earth, such as overcoming poverty, disease, underdevelopment, and violence. Taking care of each other is key in this ongoing development. It is the combination of creativity and empathy that transcends mere day-to-day exigencies.

3. Scientific and technological progress has a positive effect in that, when applied to the production process, it increases the productivity of the labor force and of industrial and agricultural capacities, which in turn leads to rising living standards and a longer life expectancy for more and more people. A prosperous physical economy is the precondition for the positive development of the common good, providing not only the elites, but all people with quality food, clean water, affordable and modern health care, quality education, modern communications and, above all, cheap and sufficient energy with high energy flux densities. Inherently safe third-generation nuclear energy and the future use of thermonuclear fusion are indispensable for securing mankind’s energy supply for an unlimited time. Unreliable energy systems and increasing energy prices are the mother of inflation. Poverty starts with energy poverty.

4. The purpose of the economy has nothing to do with profit, but with the happiness of people, in the sense meant by Gottfried Wilhelm Leibniz, i.e., that people are able to develop all the inherent potentials they have into a harmonious whole, and thus contribute to the best possible further development of mankind. Or as the wise Solon of Athens said: The purpose of mankind is progress. It is the duty of good government, through its policies, to provide for the happiness of its citizens in this sense, beginning with universal education for all, the goal of which must be to foster beautiful character through education and the development of an ever-increasing number of geniuses. This perspective is in accordance with Vladimir Vernadsky’s conviction that the physical universe must inherently evolve in such a way that the share of the noösphere increasingly grows in relation to the biosphere. To be more specific, growth should be two-fold, creativity for the material necessities and empathy for the immaterial needs. Taking care of each other and our natural environment is presented in our slogan: “Prosperity for all,” in which all refers not only to us in the here and now, but also to future generations.

5. Man’s true destiny is not to remain an earthling. His identity, as the only known species endowed with creative reason, is to explore space, as we did with planet Earth. What space pioneer Krafft Ehricke called the “extraterrestrial imperative,” or in a certain sense, the new educational effect of space travel on man, requires mankind to truly “grow up,” that is, to cast off his irrational impulses, and make creativity his identity, which has so far only been the case for outstanding scientists and artists of classical culture. In this phase of evolution, of love for humanity and love for creation, generated by recognition of the magnificence of the physical universe, it will have become natural that mankind takes care of all aspects of humanity, the planet, nature, and the universe at large with great care, because the fabricated contradiction between man and nature will have been overcome (new stewardship). Man does not exist in opposition to nature; he is the most advanced part of it. This is what Schiller called freedom in necessity, and is the concept that Beethoven placed above his Grosse Fugue: “Just as rigorous as it is free.”

This lofty idea of man and everything he has built, is what is threatened by the Hjalmar Schachts, Klaus Schwabs, the power-hungry political leaders, and the profit-hungry business leaders of the world. This is a wake-up call, addressed to all people, to resist the danger of a new evil. Let us prevent a return to the past, when an evil elite impoverished mankind and told us to be happy with such conditions.