Wang Wen: “The World Is on The Most Dangerous Eve” – Quotes FDR 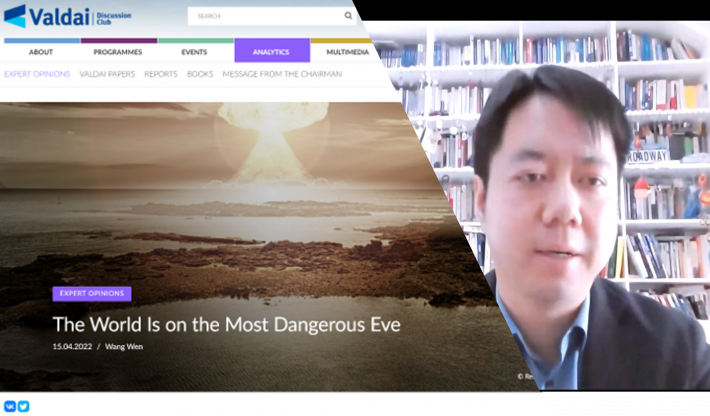 Wang Wen: “The World Is on The Most Dangerous Eve” – Quotes FDR

Apr. 16, 2022 (EIRNS)–Dr. WANG Wen, the Executive Dean of Chongyang Institute for Financial Studies, and Deputy Dean of the Silk Road School at Renmin University of China, warned that the world was heading “in the direction of global disaster” and potential nuclear war. Writing on the website of the Valdai Club in Russia, Dr. Wang, who spoke at a recent conference of the Schiller Institute, wrote that  “More and more scholars estimate that the possibility of the outbreak of World War III is increasing, and have even concluded that this could lead to the outbreak of a nuclear war.” He said that the war in Ukraine is, “In essence, a total outbreak of Cold War confrontation thinking in Eastern Europe, and it is also a total counterattack by Russia against the endless strategic expansion and extrusion of the U.S. and NATO. Despite not formally sending troops, the U.S. and NATO have used almost all means of mixed warfare such as financial sanctions, an information blockade, intelligence support, satellite navigation and air and space technology to comprehensively strangle Russia.”

The West has imposed more than 5300 sanctions on Russia during these 40 days of war, Dr. Wang noted. Famine and rise in energy prices, caused by the war, have limited production in more and more countries. If we continue, Dr. Wang asked, will Elon Musk’s prediction of economic crisis “maybe happening around spring or summer 2022, but no later than 2023” become a fulfilled prophecy?

“Looking back, tragedies in history often come from five sources: war, famine, economic crisis, pandemic and climate disaster. In spring 2022, people didn’t expect that with the outbreak of the war, the five aspects would be experiencing unprecedented resonance. The world may be on the eve of its most dangerous moment. What should we do? Perhaps it is time to revisit President Franklin Roosevelt’s words: `More than an end to war, we want an end to the beginnings of all wars.’” (Dr. WANG Wen’s full article is here.)