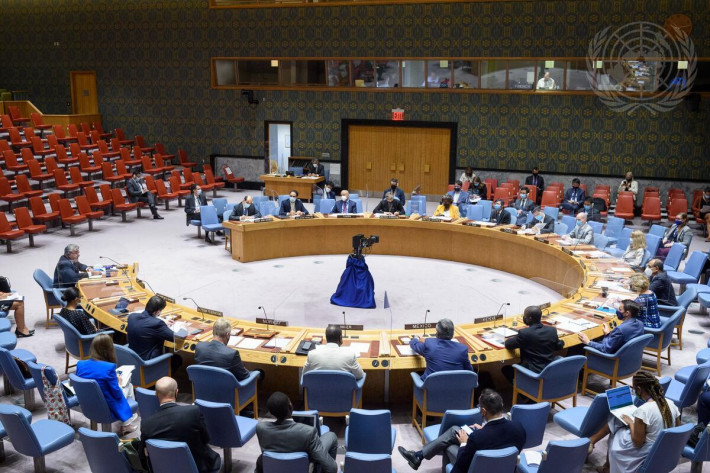 Aug. 4 (EIRNS)—In New York, the UN Security Council unanimously issued a press statement condemning deliberate attacks on civilians in Afghanistan and all instances of terrorism “in the strongest terms” on Aug. 3, while declaring its opposition to restoration of rule by the Taliban, reported The Associated Press. The council called on the Afghan government and the Taliban “to engage meaningfully in an inclusive, Afghan-led and Afghan-owned peace process in order to make urgent progress towards a political settlement and a ceasefire.” The council statement also expressed “deep concern” at the high levels of violence and reported serious human rights abuses in Afghanistan following the Taliban’s offensive. It urged an immediate reduction in violence.

It is noteworthy that the U.S., China and Russia (as well as the U.K. and France) all agreed with this perspective on Afghanistan.

Secretary of State Antony Blinken also spoke with Afghanistan President Ashraf Ghani by phone yesterday to press for a political settlement and lecture Ghani on democracy and human rights.

“Two important encounters will take place in Doha (Qatar) in the coming days: One with our regional allies and the other with international allies in the format of the Extended Troika,” comprised of Russia, the United States, China and Pakistan, Atmar continued. “We are turning to the international community with a request to exert pressure on the Taliban so that this movement observes human rights. Up to now, the Taliban has been brutally assaulting civilians.”

On the ground, heavy fighting reportedly continues in both Herat in western Afghanistan and in the southern province of Helmand. Several airstrikes were reportedly launched by Afghan and U.S. air forces since Tuesday night (Aug. 3), according to security sources. The commander of the Army’s 215 Maiwand Corps, Gen. Sami Sadat, called on residents in Lashkar Gah, the provincial capital of Helmand, to evacuate their homes as the army was preparing for a large-scale operation to clear the city of the Taliban. However, as of the latest reports, the army had not made much progress beyond controlling government buildings.