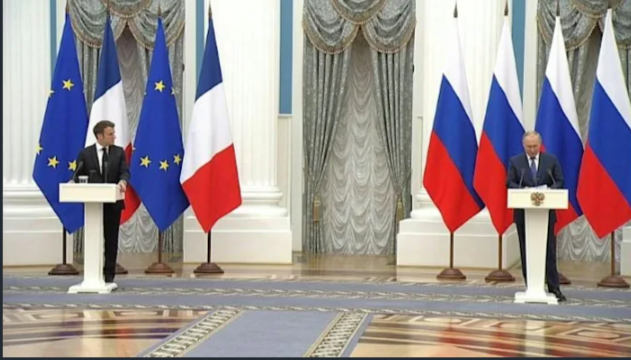 Feb. 8, 2022 (EIRNS)—President Vladimir Putin reported in his opening remarks to the joint press conference following lengthy talks with President Macron, that the two had “continued to exchange views on the proposals regarding long-term legally binding security guarantees, which Russia has made to the United States and NATO,” and also discussed at length the battle over the Minsk agreements.

He opened his remarks on their discussion of Russia’s security guarantees proposals, “remind[ing] everyone that these proposals include three key points: NATO’s non-expansion, non-deployment of offensive weapon systems near the Russian border, and the return of the bloc’s European capabilities and infrastructure to the 1997 level, when the NATO-Russia Founding Act was signed.”

His reiteration of Russia’s “categorical” opposition to NATO’s eastward expansion through the admission of new members, particularly Ukraine, in response to questions from French reporters, however, was dramatic:

“Why is Ukraine’s potential admission into NATO dangerous? The problem does exist. For example, European countries, including France, believe that Crimea is part of Ukraine, but we think that it is part of the Russian Federation. And what happens if attempts are made to change this situation by military means? Bear in mind that Ukraine’s doctrines declare Russia an adversary and state the possibility of regaining Crimea, even using military force. Just imagine what could happen if Ukraine were a NATO member. Article 5 has not been canceled. On the contrary, Mr. Biden, the President of the United States, has said recently that Article 5 is a sacred obligation and will be honored. This is fraught with a military confrontation between Russia and NATO… Ask your readers, your audiences, and the users of online resources, ‘Do you want France to fight against Russia?’ Because this is how it will be….

Asked again, he reminded another French reporter that Russia is a nuclear power:

“Do you realize that if Ukraine joins NATO and decides to take Crimea back through military means, the European countries will automatically get drawn into a military conflict with Russia? Of course, NATO’s united potential and that of Russia are incomparable. We understand that, but we also understand that Russia is one of the world’s leading nuclear powers, and is superior to many of those countries in terms of the number of modern nuclear force components. But there will be no winners, and you will find yourself drawn into this conflict against your will. You will be fulfilling Paragraph 5 of the Treaty of Rome in a heartbeat, even before you know it.

“Of course, the President does not want to see developments unfold in this way. I do not want it, either. That is why he is here and has been tormenting me for six hours now with his questions, guarantees, and solutions.

“I believe his is a lofty mission, and I am grateful to him for his efforts. For our part, we will do our best to find compromises that suit everyone. There is not a single point that we consider unachievable in the proposals we sent to NATO and Washington.”