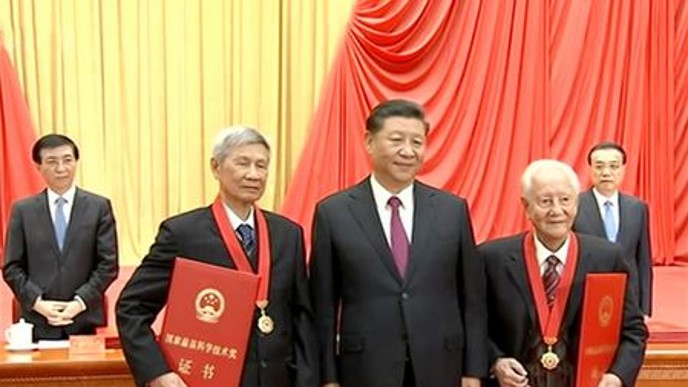 Nov. 3 (EIRNS)–The National Natural Science Award was given in a ceremony on November 3 at the Great Hall of the People by President Xi Jinping to Gu Songfen from the China Aviation Industry Corporation and Wang Dazhong from Tsinghua University. Professor Gu was the first to develop an original design for a Chinese jet fighter in the 1950s. He was also instrumental in pushing China at an early date to move into the area of stealth technology and artificial intelligence.

Professor Wang Dazhong was the chief designer of spherical nuclear fuel elements, which are essential for fourth generation pebble-bed high-temperature reactors. He was leading the work on the first demonstration reactor at Tsinghua University at a time when the world was moving away from this technology. As a result of his work, China has now constructed two commercial pebble-bed reactors in Shandong province, the first of which is to be connected to the electricity grid before the end of this year. With the lead in this technology, China is prepared to become a major producer of these reactors for export.