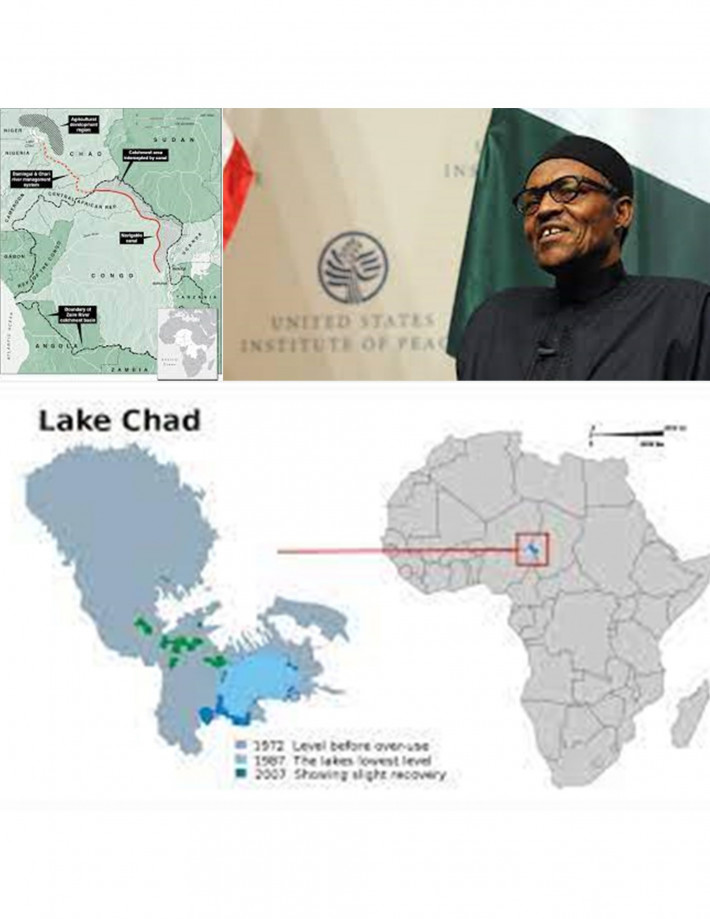 Buhari reminded everyone that about 30 million people are adversely affected by a shrunken Lake Chad, which is now just about ten per cent of its original size, and “It is imperative that there be water transfer to the Lake Chad from the Congo Basin, so that the people can resume their normal lives.” This was reported in an official press release from the Presidency.

“He added that with inter-basin water transfer, farming, fishing, animal husbandry would resume, and curtail irregular migration of youths, who now brave the Sahara Desert and the Mediterranean Sea, to get into Europe, seeking greener pastures,.” says the statement by Buhari’s special media advisor Femi Adesina.

“I’ve been engaging with the relevant stakeholders in Africa and beyond, on why we need to recharge Lake Chad. Nigeria will benefit more, but it is also advantageous to everyone,’’ President Buhari added.

Chad President Idris Deby said that the recharge of Lake Chad is of importance not only for the whole of Africa but for the entire world. He counseled the Nigerian President to consider convening an international summit to move the idea forward.

At the end of February 2018, member states of the Lake Chad Basin Committee adopted Transaqua, the project drafted by a group of Italian engineers led by Dr. Marcello Vichi over 40 years ago, as the only feasible solution to the Lake Chad crisis. Eventually, the Italian Environment Ministry and the Lake Chad Basin Commission signed an MoU for a 1.5 million Euro grant to finance a feasibility study for the project. At the end of 2019, Italian senator Tony Iwoby provided for doubling that fund with an entitlement in the 2021 national budget. However, the study has never taken off, allegedly because the African side did not take action, despite the Italian Ministry of Environment having given green light to the proposed Terms of Reference. It is not excluded that some LCBC member states underwent pressures from European neocolonial circles who have long undertaken a stealth opposition against Transaqua.
Meanwhile, last November 2020, former EU Commission Chairman and former UN envoy for the Sahel Romano Prodi confirmed his full support for Transaqua and for a possible international coalition to build Transaqua, involving the UN, the EU, the OAU and China.