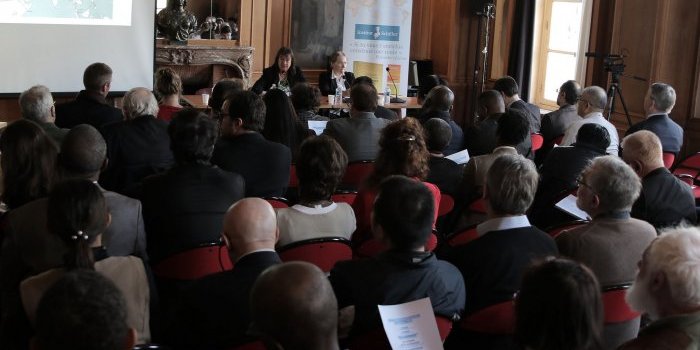 November 25, 2018by Jason Ross in Helga media coverage or interview, Media coverage of our activity, Our conferences, World Land-Bridge updates

Paris, Nov. 24—Maxime Perrotin from Sputnik France, authored two in-depth articles covering the ideas presented at the Schiller Institute’s November 6 conference in Paris. Our conference was held to announce the publication of the French edition of the Institute’s report The New Silk Road Becomes the World Land-Bridge Vol. 2.

The first article was entitled, “The Chinese economic miracle, a defeat of the West’s neo-liberal model” and published on November 2. The second article was published on November 23, entitled, “The new Chinese silk roads also go through … Africa,” and starts with the provocative question: what’s the connection between a canal in the African Rift, the Port of Gwadar in Pakistan and the idea of the coincidence of opposites of Nicolas of Cusa, a German thinker of the middle ages? Answer? The BRI initiative of president Xi Jinping. The article said, Helga Zepp-LaRouche started the conference with the provocative statement, “This dossier contains the solutions to all the major problems that we are undergoing in this planet.”

Zepp-LaRouche outlined the enormous scale of the project, in terms of countries which have joined and overall investments, noting however that it is not a one way road: president Xi Jinping in his opening statements to the China international import export fair in Shanghai early November stated that China would “import” the equivalent of 40,000 billion dollars in the course of the following 15 years! She qualified the project as “the most important at a strategic level on the planet today,” because of its win/win cooperation, the idea that no country is to dominate another one, and because of its adoption of the peaceful coexistence principles laid down by the Bandung conference of the non aligned movement, of 1955, such as respect of sovereignty and peaceful coexistence.

The BRI is not Chinese, reports Perrotin citing Schiller Institute Africa advisor, Sebastien Périmony, who said it has sparked up the desire everywhere to “develop Africa.” After outlining the achievements of the last FOCAC conference in Beijing, Périmony presented ongoing projects promoted carried out by Europeans in Africa such as the Lake Chad Bonifica/Power China studies of feasibility, but also the Inga 3 hydroelectric plant in DRC with participation of a Spanish firm, ACS. But also projects that France could take up: such as the Togo, Niger, Burkina, Ivory Coast loop, which can be coupled to the trans-sahelien Nouakchott-N’Djamena railway.

Perrotin reports also that the Schiller Institute rejects the West’s accusations that China is leading countries into a debt trap, reporting that Zepp-LaRouche turns those attacks around against the IMF and its conditionalities. The author also picked up on the fact that in the 1990’s Lyndon and Helga LaRouche campained, at the end of the cold war, for a Eurasian landbridge. This was their response to the collapse of the Soviet Union, a peace project for the 21st century which would have used the COMECON industrial capacities to relaunch the economy of the former East bloc; a project that was killed by Bush, Mitterrand and Thatcher whose shock-therapy lead to a rapid deindustrialization of the former communist countries.

For Helga LaRouche, Xi Jinping’s concept of “a shared community of principle for all humanity,” is a conception coincident with the thinking of Nicolas of Cuse, and his coincidence of the opposites.