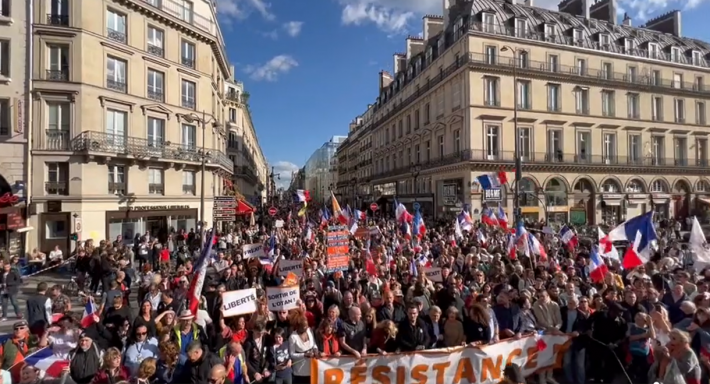 Oct. 9 (EIRNS) — A large crowd, certainly many thousands judging from video of the event on Twitter, demonstrated in Paris today with the slogan “Let’s Get Out of NATO,” many waving the Tricolor. One person passing on the tweet said, “Tens of thousands in Paris say France must leave NATO.” [The Twitter video is here.]

In Italy, the popular governor of the Region Campania, Vincenzo De Luca, who is among the leaders of the Democratic Party, made a statement Oct. 7 against NATO. Taking distance from the war policy of his own party and of the Draghi government, De Luca made a strong demand that Italy stop being the passive appendage of NATO and take initiatives for peace, because, he emphasized, the alternative is a nuclear war.

“Since February 24 we have had an increasingly dramatic evolution of the war in Ukraine, we have been speaking out clearly about Russia’s responsibilities, we have been supporting Ukraine to defend itself. And in the last few days we have seen an unimaginable evolution and dramatization.” So said Vincenzo De Luca in his usual Friday Facebook live underlining that today “the hypothesis of the use of nuclear weapons has begun to circulate in a worrying way.” Therefore, according to De Luca this “obliges us to take mass initiatives in support of peace.”

“Italy and governments can no longer be a passive appendage of NATO, De Luca said. “We have the duty to reintroduce in the language of politics the word peace that has disappeared. And we have the duty, governments and parties, to tell the Italian people what is the goal we are pursuing because we are coming by force of inertia toward a dramatic social crisis and one step away from nuclear war…. The government and parties must say we are at war if the goal is Ukraine’s military victory; we cannot live in a war economy without saying so explicitly.”

In Berlin on Saturday, Oct. 8, a crowd which Deutsche Welle called “supporters of the far-right Alternativ fuer Deutschland (AfD) party” [quite a lot of them, from DW’s photo] demonstrated in front of the Reichstag building against rising inflation. A party leader, Tino Chrupalla, accused the German government of declaring economic war on Russia and waging war on its own people. He said, “the gas price will become normal again when we buy cheap gas from Russia.” Demonstrators chanted “Away with Habeck,” meaning Energy and Environment Minister Robert Habeck, a Green. Some 2,000 police were deployed around the rally, whose views were not expressed but would be interesting to know.