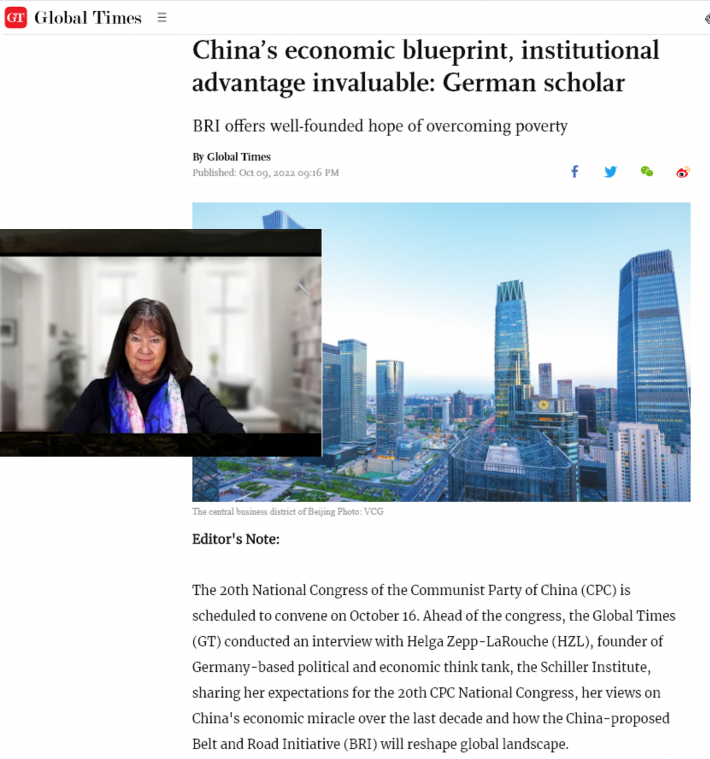 Oct. 9 (EIRNS) – Ahead of the 20th National Congress of the Communist Party of China which convenes Oct. `16, Global Times has published an extensive interview with Schiller Institute founder Helga Zepp-LaRouche, “the second piece of a series of GT‘s interviews with influential scholars” on China’s economy and the BRI.

In answer to one of many question in the interview, Zepp-LaRouche warned, “The neoliberal financial system may disintegrate, either in a hyperinflationary disintegration – it would not happen in only one country – or if the central banks try to curb inflation through a ‘Paul Volcker style’ high interest rate policy, there could be a sudden chain reaction of bankruptcies of both emerging markets and over-indebted firms. While this will obviously affect China, its economic blueprint approach of caring for each segment of the economy with appropriate incentives will be invaluable.”

And to another, on Germany’s predicament, she answered: “Top executives are already ringing the alarm bells, warning that Germany is about to crash into a wall and that its identity as an industrial nation is at stake. The straw that is about to break the camel’s back is the sabotage of the Nord Stream pipelines. The destruction of these pipelines means they cannot be re-opened as a fallback source, which means the energy crisis in Germany will get extremely serious in the short term with a great deal of social upheaval. The only way to solve the situation would be for all European nations to put an end to the sanctions against Russia, and throw all their weight into insisting on a negotiated solution for the Ukraine situation. This situation has moved beyond an energy crisis. A comprehensive approach is needed, which is why the Schiller Institute has called for a completely new international security and development architecture, which takes into account the interest of every single country on the planet.” [The entire interview is available here.]