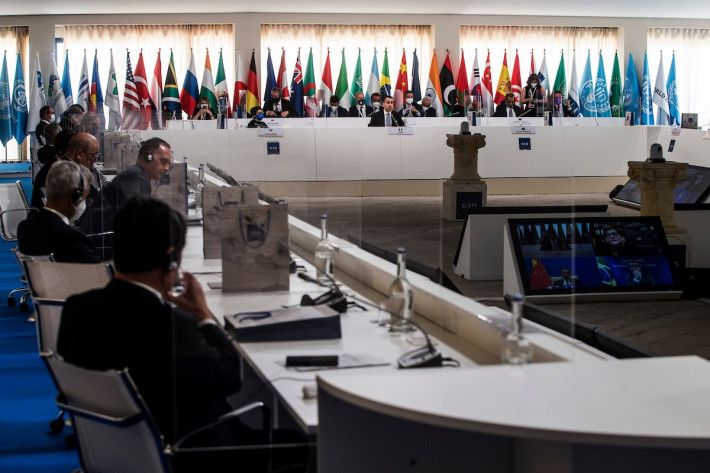 Foreign and Development Ministers of the Group of 20 and representatives of UN agencies met today in a one-day summit in Matera, Italy, hosted by Italian Foreign Minister Luigi Di Maio as Italy is currently the rotating president of the group. Several of the ministers appeared in person, but China’s, Russia’s, Brazil’s, and other ministers attended virtually. The major emphasis of the summit, whose unimaginative title was “People, Planet, Prosperity,” was combatting the COVID-19 pandemic, as well as food insecurity, famine, poverty, disease, and promoting “sustainable development,” and “sustainable” health systems–especially for Africa. Di Maio said in the closing press conference that the G20 has a special responsibility to help Africa to emerge from a “difficult period.” This must be done in such a way, he said, that people won’t feel the need to leave their countries and migrate to Europe.

The “Matera Declaration on Food Security, Nutrition and Food Systems,” announces a number of initiatives for addressing the developing sector’s most urgent problems, but all are couched in terms of “sustainability,” respecting biodiversity and gender equality, and adapting “agriculture and food systems to climate change.” The statement ends with a call for a “global mobilization” to solve these problems, while it presents none of the solutions that might actually yield results. This document cries out for the Schiller Institute and LaRouche Organization’s programmatic proposals for building a global health system, bankruptcy organization of the global financial system, and reconstruction of the world’s economies with major infrastructure projects.

During the conference itself, there was much rhetoric about “multilateralism,” loudly advocated by Secretary of StateTony Blinken, who had the audacity to say that the U.S. is leading the multilateral effort for vaccine distribution, to which Chinese State Councilor and Foreign Minister Wang Yi tweeted in response that “multilateralism is not a high-sounding slogan, let alone gift-wrapping for the implementation of unilateral acts.” In his public statements, Wang called for an end to the “zero-sum game” in foreign relations. For example, he said, in fighting the pandemic it is to everyone’s benefit that those nations which have vaccines and vaccine capacity lift their export restrictions. Forget about ideology, and get to work on stabilizing vaccine production and supply lines, he said. German Foreign Minister Heiko Maas ignored that advice when he complained that Russia and China are only using their “vaccine diplomacy” for political leverage in the countries they aid. “We must openly discuss the fact that we do not think much of their vaccine diplomacy,” he harrumphed.

Michele Geraci, former Undersecretary of State at the Italian Ministry of Economic Development, said in an interview with CGTN that there is a lot of talk about multilateralism, but if it means that 200 nations do their own thing, and there is retrenchment, this doesn’t work. It hurts production, people-to-people contact, international education, etc. What is needed is real collaboration, he insisted.

Di Maio and other Italian participants pointed out that in terms of protecting health, Rome is home to a number of international food organizations–World Food Program, Food and Agriculture Organization, etc.–and that they and Italy will host the July 26-28 World Pre-Summit of the Food Systems meeting that will be held at the UN in September. As this news service has pointed out, the Rome affair in July is terribly organized as a gathering of “stakeholders” — women, youth, climate, and biodiversity groups, etc. — and that its solutions are nature-based, not focused on ending famine. This is precisely the World Economic Forum/Davos model announced by Charles Schwab last January.