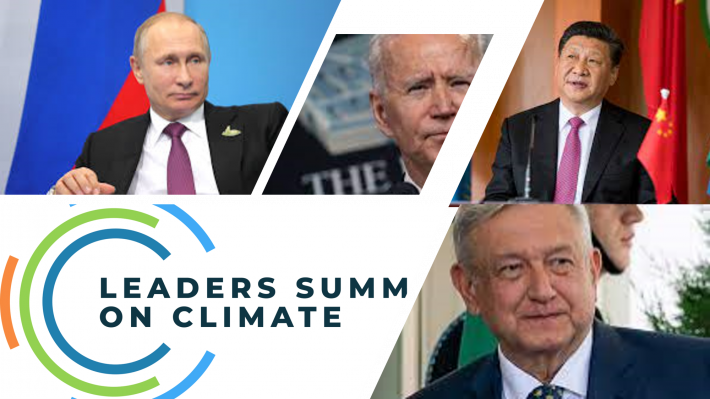 Suicide Watch: Day One of Biden’s Leaders Summit on Climate

April 22, 2021 (EIRNS)–Forty government heads of state and dozens of other leaders of institutions gathered (virtually) today to sing the praises of Joe Biden (“Joe” to many of them) for “bringing America back,” as most of them said — perhaps best expressed by the UK’s Alok Shama, the President of the COP 26 event planned for November in Glasgow: “We welcome America back into the fold,” clearly meaning the Malthusian death cult known as the British Empire. The meeting was chaired by climate fanatics Joe Biden, Antony Blinken and John Kerry.

There was a sharp distinction between the presentations of the leaders of the western world, and those of Russia, China, Mexico, South Africa, and some (but only some) other leaders from the Global South. While Biden, Macron, Merkel, Trudeau, Draghi, et al. described the so-called “climate crisis” as the greatest existential crisis facing mankind today, they emphasized that {all countries} must join in the suicide pact of eliminating fossil fuels and shutting down major portions of industry and agriculture to save Mother Earth from the non-existent danger of carbon dioxide.

But the West no longer can dictate to the nations still guided by reason, rather than by Chicken Little’s screaming, ‘the sky is falling.’

Xi Jinping spoke poetically about the harmony and balance between man and nature, but added that it must follow a “people-centered approach,” focusing on those “longing for a better life.” We must follow the UN-centered multi-nationalism (i.e., not the artificial “rules-based order” made up by the imperial powers). Most importantly, he and many others emphasized the “common but differentiated responsibilities” between the advanced sector and the developing sector, insisting that the concerns of the developing countries must be accommodated. It is of note that climate czar John Kerry, speaking on Wednesday, called on China to give up its intention to allow coal-fired energy production to “peak” only in the 2030s. Xi did not obey, stating that they would continue producing coal-fired plants, as presented in the 14th Five Year Plan. That plan made clear that moving beyond coal depends on expanding nuclear and fusion power.

Vladimir Putin also insisted on UN-centered policies. He explained that Russia had reduced carbon emissions by half since the 1990s (like China, Russia has a serious real pollution problem, which they are resolving, with the side-effect of reducing carbon emissions). He said Russia is restructuring its energy and industrial sectors, focusing on nuclear power (he reminded the world that there are no carbon emissions from nuclear), as well as petro-gas and hydrogen. He noted that Russia’s ecosystem absorbs 2.5 billion tons of CO2 per year. He closed by insisting that global development must “not only be green, but also sustainable,” by fighting poverty and closing the gap between rich and poor. Nary a word about solar or wind.

Andres Manuel Lopez Obrador (AMLO) began by stating that Mexico had recently discovered three hydrocarbon deposits, all of which, he said, would be used to meet domestic demand. No longer, he said, would Mexico sell crude oil and import gasoline. Hydro plant turbines were being modernized to produce more electricity at less cost. Vast reforestation was taking place — 700 million trees, heading for a billion, and Mexico would help reforestation in the triangle countries to the south. He offered to advise the US on this successful program. He also called on the US to treat migrants as “exceptional people” who are willing to work hard, and who should have a path to citizenship if they desire. The State Department had warned AMLO in advance that the issue of migration should not be raised in the context of the environment — they are two totally different matters — but he did anyway.

Antigua and Barbuda Prime Minister Gaston Browne, interestingly, barely mentioned climate, but focused on the financial disaster which, due to the pandemic, is striking countries like his dependent on tourism, and demanded that the nation’s debt must be forgiven or reorganized — it simply cannot be paid. He praised the fact that not only the US, but also China, were setting the pace on the climate issue.

The session was ended by 19-year-old Xiye Bastida, a Mexican version of Greta Thunberg (who is from Fridays for the Future and was busy testifying at the US Congress), ranting and lecturing the evil white folk in the Global North who caused all the problems, and must now take direction from the brainwashed children. Blinken spent several minutes praising her as one of the “leaders of the future” who are dedicated to saving us from our folly. Xiye had been scheduled to speak in the session following AMLO’s, but she was moved up to provide a direct rejoinder to AMLO, and build her up as an international figure. One pro AMLO YouTube program, Antonio Villegas’s Guacamole News, reported on the incident: “Biden Ambushes AMLO at the Summit! They Create a Mexican Greta. She Already Attacked Him. From the Soros Group.” According to Villegas, Xiye insisted that the world has to recognize that we are at the end of the era of fossil fuels.

The rest of the day included a session on Green Finance genocide with the normal suspects (Yellen, Georgieva, etc.), and another on Green Defense genocide (Sec. Austin, DNI Avril Haines, Sec. Ben Wallace, NATO’s Jens Stoltenberg, etc.). Climate is the center of all things, they all agreed, and the world must bow down or die.

Friday is more of the same, ending with Michael Bloomberg and Bill Gates.