Zepp-LaRouche on Sputnik Radio ‘Hiroshima: There was no reason for this bombing’ 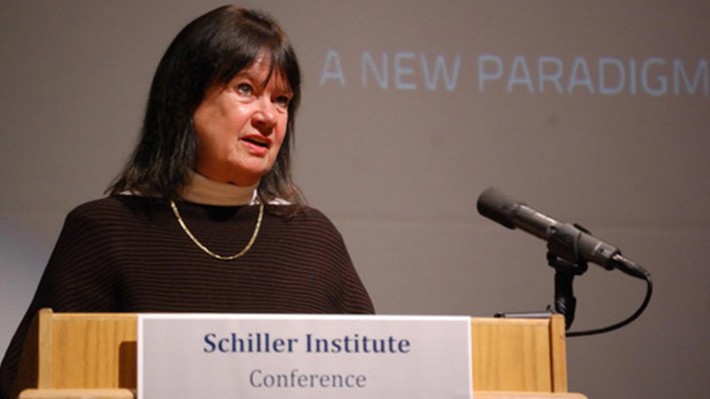 Zepp-LaRouche on Sputnik Radio ‘Hiroshima: There was no reason for this bombing’

August 11, 2015by Alicia Cerretani in General

On the occasion of the 70th anniversary of the bombings of Hiroshima and Nagasaki,Sputnik International, under the title, “US Analyst Claims Geopolitics Could Lead to Extinction of Human Race”, ran an interview with Helga Zepp-LaRouche on August 7, underscoring Lyndon LaRouche’s warning that a “Guns of August” scenario today would lead to a thermonuclear war.

Referring to the end of WWII, Sputnik quotes Zepp-LaRouche as saying,

“There was absolutely no reason for this bombing as there was already peace negotiation between the emperor and the Vatican at that time. The bombing was done to instigate horror and awe by Truman so that he could continue the era of imperialism.”

Then, regarding the strategic situation today,

“There are many people who have been warning that the US and NATO are preparing a new war against Russia and China. There is a very serious escalation of the situation, making the month of August extremely dangerous as history shows most of the wars started in August, and the US military has changed tactic in Syria last week and the US Congress has gone into recess.”

Helga Zepp-LaRouche, President of the International Schiller Institute issued a “Call to Stop the Immediate Danger of World War III!”, as a petition, earlier this week for circulation internationally.

The full interview and article with Helga can be found here.  A transcript of the interview is below.

Helga Zepp-LaRouche: I think historically it is now well-established that there was absolutely no reason for this bombing, because there were already peace negotiations between the Emperor and the Vatican at that time. And therefore the argument that it was to save American soldiers, is completely fraudulent. I think the bombing occurred to establish an aura of Schrecklichkeit, of horror, of awe, to basically—this was Truman, and it was a way to start to establish a post-war order in order to continue the rule of colonialism and imperialism, which would not have happened if Franklin D. Roosevelt would have been alive.

Sputnik: And let’s look at these poll findings, from the Japanese. The majority of Japanese don’t share the point of view presented by foreign policy, so the question here, Helga, is, who and why is someone trying to rewrite history?

Zepp-LaRouche: Yes, but I think it is part of the present logic. I think there are many people in the last period who have been warning that the United States and NATO are preparing a new war, this time against Russia and China. Even the Observer has an article to this effect. My husband, Mr. Lyndon LaRouche, has warned at the end of June already, that the most dangerous period would be the month of August. First of all, because all world wars in the past century have started in August, and he said the most dangerous period is when the U.S. Congress goes into recess. And unfortunately, this was totally confirmed, because the U.S. Congress went into recess last Wednesday, a week ago, and on Friday, the U.S. changed the rules of engagement for the U.S. Air Force in Syria, and that was done without announcement, without approval of Congress, and it was only leaked then the following Sunday by the Wall Street Journal.

Now this means a very serious escalation, because it brings the world back to exactly the situation where it was two years ago, when the U.S. Congress voted against military strikes against Syria. So this time, the Congress is out of session, and this was changed —this is unfortunately only one aspect. You have to look at the totality of the situation.

You have the modernization of tactical nuclear weapons in Europe, the B61 and B61-12, which could indicate an attack being brought into the Russian territory by F-35 stealth bombers, and there are many people who are extremely concerned that this is a preparation for a regional nuclear theatre in Europe. You have to add to that the fact that the United States did not stop the U.S. missile defense system in Eastern Europe after the Iran P5+1 agreement was successfully concluded, and that confirms what Russia has said many times: that this U.S. missile defense system was never meant for missiles from Iran, but it was always directed against Russia.

And then, at the recent and present ASEAN forum in Malaysia, Foreign Minister Lavrov just warned correctly, that there is a huge military buildup in the Pacific. Obviously, what is the purpose of these aircraft carriers and other systems being brought there?

So I think the signs are overwhelming that there is a war preparation, and I think there will be a maneuver in September which basically will be—it’s called the Trident Juncture 15— which will rehearse the use of nuclear weapons against Russia.

All of these signs are overwhelmingly worrisome, and I think we need, really, a complete mobilization of the world public, because this is the eve of World War III, and it has to be stopped. Because if it happens, I don’t think it will be a regional theatre; I think it will, by the nature of thermonuclear weapons, it will be a global thermonuclear war, in which case there will be probably nobody left alive. So, we are really looking at the annihilation of mankind, and that is where we are at.

Sputnik: At this point, Helga, what should be done? Who should sit down and talk?

Zepp-LaRouche: Well, I think there must be made an absolute effort that the United States, Russia, and China are sitting together at one table, and all the other leaders of the world who are concerned, should make maximum pressure that this occurs. Europe could do a big role, if Europe would say, we are not part of such a war, and we insist that the United States and Russia and China, the leaders, sit together, and discuss the new international security architecture.

I think President Xi Jinping has given a very good example when he offered to President Obama at the recent APEC meeting last year, in Beijing, the win-win policy of cooperation with the New Silk Road. He has said that we have to have a world order in which cooperation among major nations occurs for the common benefit of everybody, a win-win strategy. And I think, that if we have learned anything from the geopolitical wars in the Twentieth Century, then the lesson must be that, if we don’t want to extinct ourselves, we must overcome geopolitics. Geopolitics is what causes world wars. And that we must move to a new paradigm in the history of civilization, a new era, which is defined by the common aims of mankind as one humanity first, and then you can settle regional questions after you have agreed on these common aims of mankind.

And that is the all-demanding question of this moment.