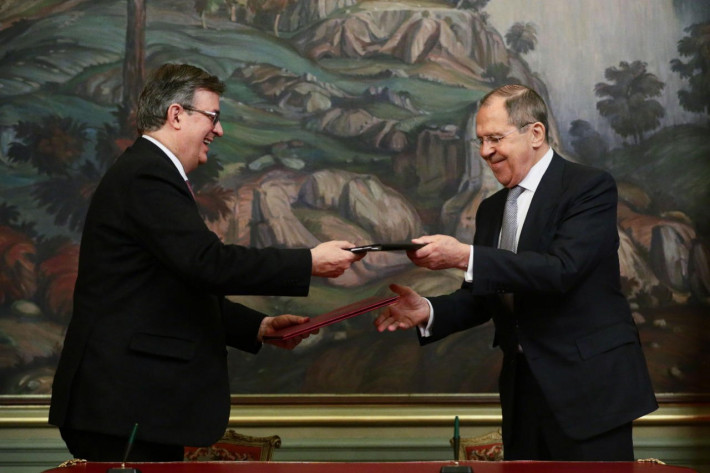 April 28 (EIRNS)—In a ceremony today at the Russian Foreign Ministry, Mexican Foreign Secretary Marcelo Ebrard and his counterpart Sergey Lavrov signed a series of comprehensive agreements, not only relating to Mexico’s plan to produce the Sputnik V vaccine at its state-run Birmex lab, but also to far-reaching cooperation in a number of fields, including economics and trade, aerospace, culture and science and technology. As both ministers stressed, the relationship between the two countries is growing stronger. At their joint press conference, Lavrov reported, “we have decided to intensify our political contacts,” including signing a plan for Ministerial Consultations spanning 2021-2024. Ebrard underscored, according to a communique from Mexico’s Foreign Ministry, that Mexico and Russia are “entering a phase in our relationship which is very close, and the pandemic has opened the door for us to broaden and deepen that relationship.” Lavrov pointed out that Presidents Putin and López Obrador speak by phone “regularly,” and hope to meet in person once the epidemiological situation permits. The official communique is published on Mexico’s government website.

Mexico is the only country in North America which has approved emergency use authorization for Sputnik V and one million Mexicans have already been vaccinated with it. The plan agreed to now is that Mexico’s state-run Birmex laboratories will do the final bottling and packaging of Sputnik V, beginning in May or June. Aside from meeting with Lavrov today, Ebrard also held meetings with officials of the Russia Direct Investment Fund (RDIF—Russia’s sovereign wealth fund) and with the Gamaleya Scientific Research Institute of Epidemiology and Microbiology, which produces the vaccine. The daily Economista reported Ebrard’s remarks that Birmex is already working with the RDIF to arrange for “filling and bottling in Mexico,” and then down the road, perhaps there can be “full production (combined) of Sputnik V, or Sputnik No. 2, or `Sputnik Light.’” Sputnik Light is a one-dose vaccine in which Mexico is particularly interested, as its use would help accelerate its national vaccination program and avoid some of the logistical problems associated with a two-dose vaccine.

Other agreements included a commitment to resume, perhaps by June, meetings of the Intergovernmental Russian-Mexican Joint Commission on Economic, Trade, Scientific and Technological Cooperation and Maritime Navigation. They also signed an agreement on aerospace cooperation, for the peaceful exploration of outer space, and on establishing in Mexico City a Russian Center of Science and Culture. Lavrov and Ebrard discussed plans to ensure that a large Mexican business delegation attends the June summit of the St. Petersburg Forum, and they stressed that their governments agreed on a global agenda which includes respect for the UN-centered international order, respect for international law and multilateralism, reject interference in the internal affairs of sovereign nations, and reject coups as a means to effect regime change. The official report on the meeting is here.