Putin Warns: West Gone Too Far, Do Not Cross Red Lines – Rather Let’s Work Together Development 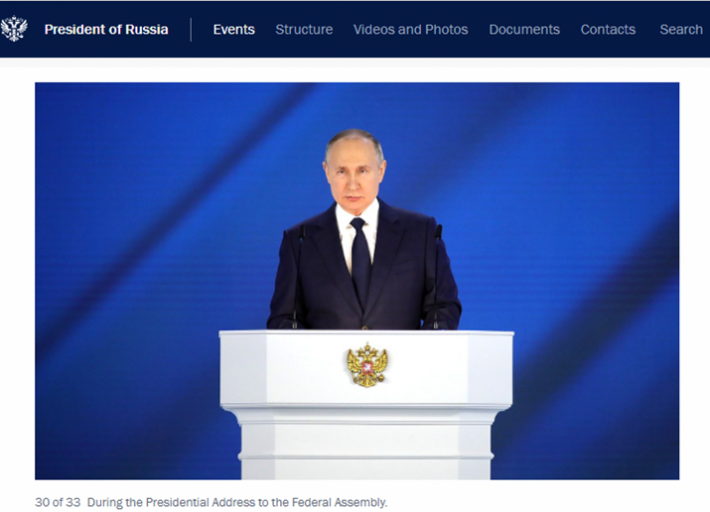 Putin Warns: West Gone Too Far, Do Not Cross Red Lines – Rather Let’s Work Together Development

Putin Warns West It Has Gone Too Far: Do Not Cross Our Red Lines, But Let’s Work Together on Mutual Development

April 21 (EIRNS)—International media, for once, did not censor the “bottom line” of the grave warning delivered to those in the West who treat Russia as an adversary by Russian President Vladimir Putin in his annual Address to the Federal Assembly today. For our readers to take in the full weight of Putin’s warning and contrasted approach offered, a much fuller extract of the foreign policy part of his speech is provided here:

“The meaning and purpose of Russia’s policy in the international arena—I will just say a few words about this to conclude my address—is to ensure peace and security for the well-being of our citizens, for the stable development of our country. Russia certainly has its own interests we defend and will continue to defend within the framework of international law, as all other states do. And if someone refuses to understand this obvious thing or does not want to conduct a dialogue and chooses a selfish and arrogant tone with us, Russia will always find a way to defend its stance.

“At the same time, unfortunately, everyone in the world seems to be used to the practice of politically motivated, illegal economic sanctions and to certain actors’ brutal attempts to impose their will on others by force. But today, this practice is degenerating into something even more dangerous—I am referring to the recently exposed direct interference in Belarus in an attempt to orchestrate a coup d’état and assassinate the President of that country. At the same time, it is typical that even such flagrant actions have not been condemned by the so-called collective West. Nobody seemed to notice. Everyone pretends nothing is happening.

“But listen, you can think whatever you like of, say, Ukrainian President [Viktor] Yanukovych or [Nicolas] Maduro in Venezuela. I repeat, you can like or dislike them, including Yanukovych who almost got killed, too, and removed from power via an armed coup. You can have your own opinion of President of Belarus Alexander Lukashenko’s policy. But the practice of staging coups d’état and planning political assassinations, including those of high-ranking officials—well, this goes too far. This is beyond any limits.

“Suffice it to mention the admission made by the detained participants in the conspiracy about a planned siege of Minsk, including plans to block the city infrastructure and communications, and a complete shutdown of the entire power system in the capital of Belarus! This actually means they were preparing a massive cyberattack. What else could it be? You know, you cannot just do it all with one switch.

“Clearly, there is a reason why our Western colleagues have been stubbornly rejecting Russia’s numerous proposals to establish an international dialogue on information and cyber security. We have come up with these proposals many times. They avoid even discussing this matter.

“What if there had been a real attempt at a coup d’état in Belarus? After all, this was the ultimate goal. How many people would have been hurt? What would have become of Belarus? Nobody is thinking about this.

“Just as no one was thinking about the future of Ukraine during the coup in that country.

“All the while, unfriendly moves towards Russia have also continued unabated. Some countries have taken up an unseemly routine where they pick on Russia for any reason, most often, for no reason at all. It is some kind of new sport of who shouts the loudest.

“In this regard, we behave in an extremely restrained manner, I would even say, modestly, and I am saying this without irony. Often, we prefer not to respond at all, not just to unfriendly moves, but even to outright rudeness. We want to maintain good relations with everyone who participates in the international dialogue. But we see what is happening in real life. As I said, every now and then they are picking on Russia, for no reason. And of course, all sorts of petty Tabaquis are running around them like Tabaqui ran around Shere Khan—everything is like in Kipling’s book—howling along in order to make their sovereign happy. Kipling was a great writer.

“We really want to maintain good relations with all those engaged in international communication, including, by the way, those with whom we have not been getting along lately, to put it mildly. We really do not want to burn bridges. But if someone mistakes our good intentions for indifference or weakness and intends to burn or even blow up these bridges, they must know that Russia’s response will be asymmetrical, swift and tough.

“Those behind provocations that threaten the core interests of our security will regret what they have done in a way they have not regretted anything for a long time.

“At the same time, I just have to make it clear, we have enough patience, responsibility, professionalism, self-confidence, and certainty in our cause, as well as common sense, when making a decision of any kind. But I hope that no one will think about crossing the ‘red line’ with regard to Russia. We ourselves will determine in each specific case where it will be drawn.”

Putin reminded his live audience and those listening that Russia already has “standing on combat duty” the advanced hypersonic and other weapons systems he had announced in March 2018 (the Avangard, Kinzhal hypersonic missiles), the anti-ship Tsirkon hypersonic missiles will follow soon, and the Sarmat super-heavy intercontinental ballistic missiles are scheduled to go on combat duty in late 2022, while development proceeds on the Poseidon and Burevestnik combat systems.

That reminder of reality delivered, Putin reiterated Russia’s January 2020 offer to negotiate and hold a summit of the P-5:

“As the leader in the creation of new-generation combat systems and in the development of modern nuclear forces, Russia is urging its partners once again to discuss the issues related to strategic armaments and to ensuring global stability. The subject matter and the goal of these talks could be the creation of an environment for a conflict-free coexistence based on the security equation, which would include not only the traditional strategic armaments, such as intercontinental ballistic missiles, heavy bombers and submarines, but—I would like to emphasize this—all offensive and defensive systems capable of attaining strategic goals regardless of the armament.

“The five nuclear countries bear special responsibility. I hope that the initiative on a personal meeting of the heads of state of the permanent members of the UN Security Council, which we proposed last year, will materialize and will be held as soon as the epidemiological situation allows.”

The way forward lies in “broad international cooperation … on the basis of mutual respect,” Putin outlined in closing his remarks on foreign relations. Thus, Russia has assisted the settlement of regional conflicts, as in Syria, Libya, and Nagorno-Karabakh, and participates in the Shanghai Cooperation Organization, BRICS, the Commonwealth of Independent States, the Collective Security Treaty Organization. “There are new, interesting projects” in our common projects in the Eurasian Economic Union,” Putin declared, “such as the development of transport-and-logistics corridors. I am sure they will become a reliable infrastructure backbone for large-scale Eurasian partnership … [as] practical instruments for resolving national development tasks.”