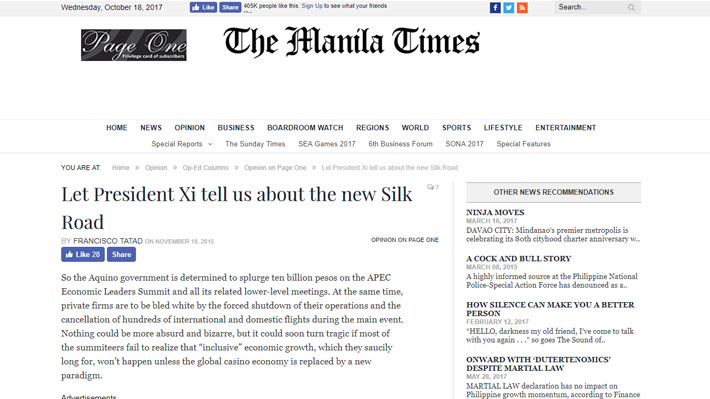 The op-ed is titled: “Let President Xi tell us about the new Silk Road,”

“So the Aquino government is determined to splurge ten billion pesos on the APEC Economic Leaders Summit and all its related lower-level meetings. At the same time, private firms are to be bled white by the forced shutdown of their operations and the cancellation of hundreds of international and domestic flights during the main event. Nothing could be more absurd and bizarre, but it could soon turn tragic if most of the summiteers fail to realize that inclusive economic growth, which they saucily long for, won’t happen unless the global casino economy is replaced by a new paradigm.

Indeed, the world needs not just a paste-up job, but a new paradigm. No significant intervention has occurred since Lehman Brothers, with assets of over $600 billion, declared bankruptcy in 2008. None since the most vulnerable European economies began to flounder. None since Iraq and Libya lost their unwanted governments. Bail-outs in Wall Street and bail-ins in Europe saved the big banks but not the small depositors. Since 2008, the too-big-to-fail banks grew bigger by 40-80 percent, and enlarged their derivatives debt contracts to up to $2 quadrillion, said the founder of Schiller Institute Helga Zepp-Larouche in a recent address at the National Press Club in Washington.

There are no more tools in the toolbox of the financial institutions, Zepp-LaRouche said. So chaos could soon break out. For some international players, chaos, more precisely war, is the solution. They have invested so much in stockpiling weapons of mass destruction, including thermonuclear weapons with the capacity to kill the entire human population 20 times over, that they seem obliged to consider using them, regardless of the cost or consequence. But war can only translate into death and destruction [in] our clearly civilizational crisis.

The solution has to be something moral, social, political and economic. Mankind must recover from the global blurring of fundamental moral principles, the clashing political agendas and ambitions of men and nations, and the utter bankruptcy of the global economic system. The overindulgence of our sexual appetites, the unfettered desire by an unaccountable elite to impose their own ethic upon the rest, the resultant divide that sets apart the one percent at the top from the ninety-nine percent at the bottom of the pyramid — not these, but the opposite of these, are the pillars upon which our future civilization should be built.

Which nation, and which leader of what nation, will drive home this point? And who has the best credentials to do it?

The United States, according to the renowned social-work educator Paul Adams in a book on social justice with Michael Novak and Elizabeth Shaw, was the first to lift a large majority of its poor (largely immigrants) out of poverty within a generation, and to keep on doing so. The United States was, as it were, the laboratory for how underdeveloped peoples break through the chains of centuries of poverty. It was the first developing nation. No one could argue against this.

But the record has shifted since. In the last seventy years since its founding, the United Nations, according to President Obama, has raised more than a billion poor people to the middle class. But it was former US Senator Mike Gravel of Alaska, who has pointed out in a paper he filed before our Supreme Court,that more than half of that number — 600 million, twice the total population of the United States — were Chinese. It happened within a little more than one generation or three decades; by adopting free-market capitalism while remaining communist, China — and not the United Nations — did it. – Poverty in the US – Today in the United States, by Zepp-La Rouches own reckoning, at least seven (7) percent of the population live in extreme poverty; some 21 percent have no access to sufficient food; 95 million have lost their jobs; and 104 million who are eligible cannot find jobs. In Europe, one-third of all the youth are unemployed; in the south of Europe alone, 60 percent are unemployed….

– 60 million refugees – Yet there is a new class of people whose problem is worse than sheer poverty. Many of them drown at the Mediterranean trying to flee the war, hunger, ethnic strife, unemployment in their own countries. These are the refugees….

– Most powerful in history –

But some leaders seem to be more concerned with projecting military might rather than manifesting compassion for the excluded and the marginalized. In his address to the 70th UN General Assembly on Sept. 28, 2015, Obama left the world gobsmacked when he said: “I lead the strongest military that the world has ever known, and will never hesitate to protect my country or our allies, unilaterally and by force where necessary.”…

As if to make sure that nobody missed this point, the US guided missile destroyer USS Lassen reportedly sailed within 12 nautical miles of one of the China-built land formations in the Spratlys while the Asean defense chiefs were meeting in Kuala Lumpur, together with US Defense Secretary Ashton Carter and his Chinese counterpart, Chang Wanquan.

Addressing the same UN General Assembly, Russian President Vladimir Putin took a different path. He decried the aggressive foreign interference that has resulted in a flagrant destruction of institutions and peoples lifestyle itself. Violence, poverty and social disaster have marred the growth of democracy and progress; “nobody cares a bit about human rights, including the right to life,” Putin said. In the Middle East and North Africa and elsewhere, anarchy areas have been created, which are now filled with extremists and terrorists, he added.

As though in anticipation of the Nov. 13 terrorist attack in Paris, which left over a hundred people dead and more than two hundred wounded, and prompted the Hollande government to declare a state of emergency, Putin proposed the creation of a genuinely broad international coalition against terrorism. He promised that under Russia’s chairmanship, the UN Security Council would convene a ministerial meeting to carry out a comprehensive analysis of the threats in the Middle East and seek to coordinate all actions against the Islamic extremists.

He proposed to restore government institutions in Libya, support a new government in Iraq, and provide comprehensive assistance to the legitimate government in Syria. And he asked that the international community now live without dividing lines, build on transparent and jointly formulated rules, including WTO principles stipulating the freedom of trade and investment and open competition, harmonize regional economic projects to promote the integration of integrations.

Finally, he offered a vision of the Eurasian Economic Union interconnecting with Chinas new Silk Road Economic Belt project to create a new development paradigm for the 21st century.

The unexplained crash of a Russian passenger plane which killed all 224 passengers at Egypts Sinai Peninsula on Oct. 31 has prevented Putin from coming to Manila. But Chinas President Xi Jinping will be here. He should be encouraged to talk about China’s vision for the world economy. Supported by Brazil, Russia, India, and South Africa which, together with itself, constitute the relatively new economic bloc called BRICS, China has defined a 30-year vision to unite the worlds economies through high-speed railroads, roads and other fiber optic communications across the Eurasian land mass of Russia from western China to Europe, extending all the way north into the Scandinavian countries and South into Iran and the Arab countries. Its maritime component seeks to build efficient ports in strategic places to enhance the development of world trade.

The new bloc represents a power center based on economic growth, and above all, on leading-edge technology, including, for now, the exploration of the Moon to bring back to Earth large quantities of helium-3 for the future economy of thermonuclear fusion power.

This could lead to a scientific and technological revolution that would dramatically increase the energy-flux density in production processes on Earth, and in fuels for space travel, thereby hastening the evolution of the human species.

– Ambitious yes, but nothing to fear from –

Among the ambitious projects being lined up by China are a second Panama Canal through Nicaragua, a transcontinental rail connection between Brazil and Peru, the Kra Canal in Thailand, a bridge to connect Malaysia and Indonesia, a system of bridges across the Sunda Strait between Java Sea and the Indian Ocean, etc. These are not small projects, each one of them will require a massive mobilization of manpower, technology, engineering skills, and financial resources.

But anyone who remembers how America opened up its wild frontiers, brought in the railroad to transport people, beasts and goods across that great continent, built ports for its ships, and eventually airports and planes, to connect to the outside world will perhaps recognize in China’s new Silk Road a global expansion of what the hardy American pioneers first successfully put to work as a genuine achievement of man in the great United States.

The world should have nothing to fear from it.