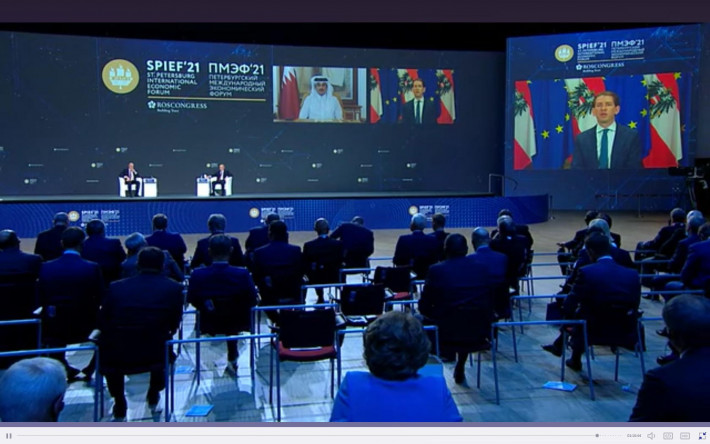 One panel at today’s opening day of the St. Petersburg International Economic Forum (SPIEF) was chaired by the Valdai Discussion Club, moderated by the Club’s Programme Director, Ivan Timofeev, on the global impact of sanctions. The title: “The Risks Sanctions Pose to the Global FInancial System and International Business.” The program description included the following:

“Sanctions present a threat to both the financial infrastructure of the ‘target country’ and foreign banks…. The transformation of the dollar into a weapon carries the threat of unforeseen shocks. Restrictions on the financial sector are also associated with human rights issues, particularly a lack of access to financial services (underbanking) for large groups of citizens…. The intensity and indiscriminate nature with which sanctions are deployed suggests that a targeted political tool is now becoming all-encompassing.”

The United Nations Special Rapporteur on the negative impact of the unilateral coercive measures on the enjoyment of human rights, Alena Douhan (a former professor of international law at Belarus State University), spelled out the unilateral sanctions from the US and EU are illegal under international law, and are imposed “without any attempt at legal proceedings, without due process.” Due especially to the use of “secondary sanctions,” they create fear in businesses and banks to do any business with sanctioned countries or businesses or individuals. The impact is severe on a nation’s “health system, water and electricity, transportation — people can not get to the hospitals.” She named Venezuela, Syria, and Yemen as countries in which the hospitals have practically no medicine, no vaccines, high unemployment, and a consequent vast increase in crime and trafficking of people and drugs.

Vladimir Kolychev, Russia’s Deputy Finance Minister, said that as the result of these crimes, “a new global financial system is coming into being. It won’t come overnight, but it is inevitable. The sanctioned countries will do it.” There is an ongoing withdrawal from  the existing structures, he said, since it is not safe to use US dollars. Russia’s trade was 80% in dollars as recently as 2019, but is now less than 50%. Reserves in Russia are now only 20% in US dollars. Russia and others under sanctions are also moving to produce goods domestically in critical areas, such as health care.

Vladimir Chizhov, the Russian Ambassador to the EU, said we are living through a “sanctions pandemic.” The EU now has sanctions against 32 countries, including three which are applying to join the EU (Turkey, Bosnia Herzegovina, and Montenegro). The EU says it only uses sanctions as a “last resort,” Chizhov said, “but alas, this is not a fact, far from a fact — it is their first choice.” Only sanctions approved by the UN Security Council are legal under international law, he added. “Smart sanctions,” he said, “are stupid. Above all sanctions don’t work, “even legal ones — look at the Taliban.”