Live Event: Tribute to the 75th Anniversary of Indian Independence 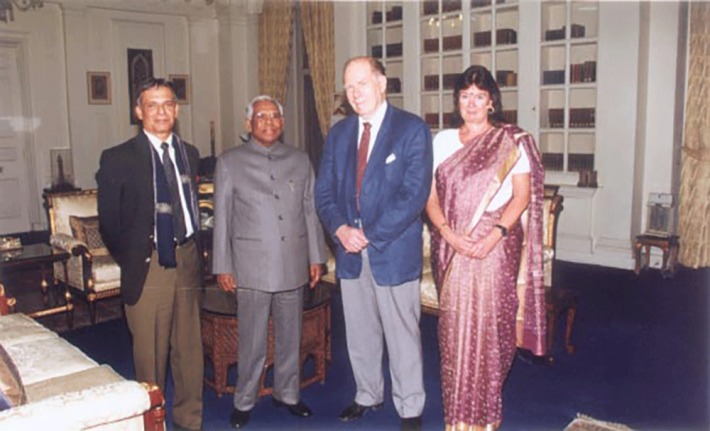 Live Event: Tribute to the 75th Anniversary of Indian Independence

Helga Zepp-LaRouche, founder and leader of the International Schiller Institute, will give a special online presentation in celebration of the 75th anniversary of Indian independence, Saturday, August 20. Joining Helga Zepp-LaRouche will be Sam Pitroda, an innovator, entrepreneur, and policymaker. He has been a Cabinet Minister and advisor serving over the years seven Indian prime ministers.

This presentation will advance the Schiller Institute’s proposal for the creation of a new world security and development architecture, rejecting the “Global NATO” perpetual war practice. Zepp-LaRouche has long discussed this approach, including in “Gandhi’s Vision for a New Paradigm in international Relations, a World Health System, and Direct Non-Violent Action In Times of Social Breakdown,” a paper delivered at the online International Conference of the Association of Asian Scholars on “Revisiting Gandhi: Peace, Justice and Development,” October 30-31, 2020.

The relationship to India of Zepp-LaRouche and her husband, the late statesman and economist Lyndon LaRouche, was a bedrock influence in how the Schiller Institute was formed. Lyndon LaRouche, presenting testimony to an international tribunal of legislators, legal experts, diplomats and civil rights leaders conducting Independent Hearings to investigate misconduct of the United States Department of Justice, described how he began his political career.

A number of these students who participated in [my] classes, became associated with me, and out of this association came the birth of a nascent political organization, as much a philosophical organization as political. Our essential commitment was to Third World issues and related issues – that is, economic justice for what is called the Third World, is essential for a just society for all nations. I became particularly attached to this during military service overseas in India, where I saw what colonialism does to people…. and that if we allowed the circumstances to prevail that I saw to prevail in the Third World, we will bring upon ourselves some kind of disaster, either war, or something comparable down the line. And that was essentially our commitment as an association.

On August 6, The Hindu, a major Indian newspaper ran an article, “Schiller Institute Calls for New Bretton Woods to End War, Economic Crisis,” illustrated with a prominent photograph of a 2001 meeting of Mr. and Mrs. LaRouche with then-Indian President K.R. Narayanan at the presidential offices.

Zepp-LaRouche and the Schiller institute are organizing a two-day weekend conference September 10-11, celebrating Lyndon LaRouche’s 100th birthday and demanding that a scientific and cultural dialogue among India, the United States, Russia and China supersede the drive toward war now dominant in the world, and that the spiritually civilized standpoint of Gandhi’s vision for a new paradigm in international relations become, through such conferences, the means for peace through economic development worldwide.

Zepp-LaRouche will also announce the first-time-ever publication of a January 1985 “India paper” by LaRouche, “The Implications of Tilak’s Theses for the Scientific Potential of India Today,” soon to be available through Executive Intelligence Review. Other LaRouche documents on India include “A Fifty-Year Development Policy for the Indian-Pacific Ocean Basin” and “The Present Scientific Implications of Vedic Calendars from the Standpoint of Kepler and Circles of Gauss.”