Russian Economist Sergei Glazyev Praises the Thinking of Lyndon LaRouche, on the Centenary of His Birth 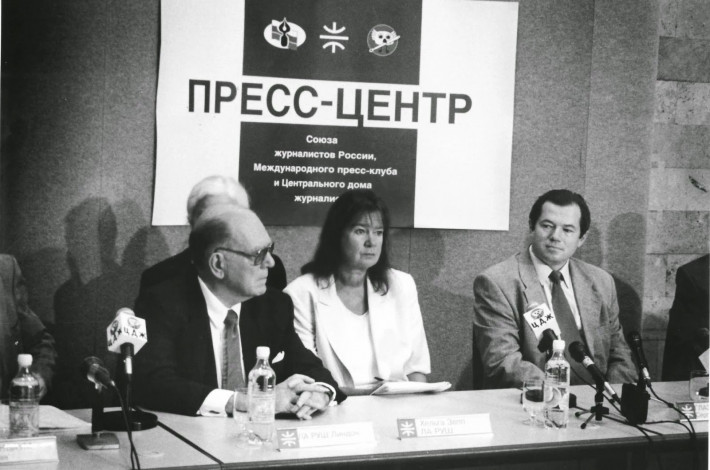 Russian Economist Sergei Glazyev Praises the Thinking of Lyndon LaRouche, on the Centenary of His Birth

September 14, 2022by David Dobrodt in General

Renowned Russian economist Dr. Sergei Glazyev sent a message of appreciation of the thinking and impact of Lyndon H. LaRouche, Jr., on the centenary of his birth, September 8, to his widow and co-thinker Helga Zepp-LaRouche, founder of the Schiller Institute.

Glazyev is an Academician of the Russian Academy of Sciences, who has also held various posts in the Russian government since 1992. His book Genocide: Russia and the New World Order was brought out in English by EIR in 1999.

As a Member of Parliament, he headed up the State Duma’s Committee on Economic Policy. In that capacity, in 2001 he invited Lyndon LaRouche to speak at hearings he convened on how to protect and develop the real economy in the face of a global financial crisis. In recent years Dr. Glazyev has concentrated on Eurasian economic integration and development.

The following text was taken from Dr. Glazyev’s 14-minute video message, which is posted on the Schiller Institute of Germany’s youtube channel:

This year progressive people around the world are observing the centenary of the birth of the brilliant thinker and, I wouldn’t hesitate to say, prophet of our time, Lyndon LaRouche. Unfortunately, we no longer can converse with him, and it’s a pity he did not live to see the day when his warnings about the crash of the world financial system came to pass.

Already 30 years ago, and perhaps even earlier, Lyndon LaRouche drew attention to the fact that the inflation of financial bubbles, including derivatives bubbles, and the creation of financial pyramid schemes would inevitably bring about the collapse of the world financial system. And he proposed to adopt timely measures to avert that collapse.

If the leaders of the world’s nations had listened to the voice of Lyndon LaRouche, then perhaps we might have managed to avoid the social upheavals we confront today as a result of the collapse of the world financial and economic system, which is based on unlimited emission of the dollar and other Western reserve currencies.
These financial bubbles are not getting any smaller. We have seen that attempts to clean them

up, end in the inflation of new bubbles. Even the crash of 2008, which erased tens of trillions of dollars of people’s savings, including pension funds, did not prevent financial bubbles from bloating up again as a result of the limitless emission of the world reserve currencies, using the device of so-called quantitative easing.

Lyndon LaRouche proposed a mutual cancellation of these debts, observing the principle of fairness and effectiveness.

In effect, what we see now is that the emitters of the world reserve currencies are simply refusing to fulfill their responsibilities. It could have been anticipated, that if countries which took the path of pumping up financial bubbles, abusing their monopoly on the right to issue a world currency, ran into a situation where the scale of these financial pyramids greatly exceeded the country’s ability to service them, the question would inevitably arise of how to repudiate these debts. Simply declare bankruptcy before the whole world, or come up with some other ways to write off their obligations – repudiate them?

The United States, Great Britain, the European Union and Japan have taken that second route. They unilaterally seized, and blocked, Russia’s foreign currency-denominated reserves. That means they are refusing to fulfill their obligations to Russia.

Russia invested – that is, extended a credit to these countries, in the amount of more than four hundred billion dollars, that’s the state-sector component and the government’s own, our foreign-currency reserves. plus another approximately one trillion dollars belonging to private parties is located in jurisdictions of the Western emitters of world reserve currencies.

The attempts to block these funds essentially means a default, but a default on what is owed to one of their creditors. In the past, we used to call this piracy, or robbery.

Of course, these extraordinary measures, which are totally against international law and violate every conceivable rule of decency, as well as the standards of the World Trade Organization and the International Monetary Fund, can be challenged in court. But, on the one hand, this would run into the national will of the emitter-country, which may be that of a pirate or a bandit, as we are witnessing right now.

On the other hand, their action won’t save the system, because even if the USA and its European allies refuse to fulfill their obligations to Russia, that is only a small percentage of the financial obligations the world reserve currency emitters have to the entire world and their own domestic markets.

So the world is plunging into chaos, in precise accordance with the scenario, the negative scenario, that Lyndon LaRouche spoke about in forecasts he made 30 or 40 years ago.

Back then, he proposed that, instead of pumping up financial bubbles, the world reserve currency emitter-countries, together with their partners and other countries, should invest in

building global infrastructure, which would reduce the cost of trade, increase the efficiency of international economic ties, and, overall, contribute to raising connectivity worldwide. So he viewed the process of globalization as a process of expanding cooperation among countries, rather than attempts by some countries to exploit others.

As for the liberal globalization that today is leading to the collapse of the world financial system, LaRouche criticized it. He proposed a different model of globalization, based on the principles of physical economy: in particular, the famous project, which he and his wife, Helga Zepp-LaRouche, put forward for international discussion – the so-called Eurasian Land Bridge. This is a splendid and interesting project, which now, after many years, has begun to be implemented through the Chinese Belt and Road initiative, which we support through linking it with the Eurasian Economic Union.

Lyndon LaRouche looked decades ahead. He warned the USA and its partners about the inevitable collapse of their financial expansion policy, under which the interests of speculators eclipse the national interest and the development of the economy.

The global speculators and world oligarchy, which are parasites on the monetary emission of world currencies, greatly disliked LaRouche for this. He was persecuted and faced with imprisonment. He ran for the U.S. Presidency several times, and if Lyndon LaRouche had been elected President, the world today would be developing in a stable fashion. There would not be the growing chaos, there would not be the worldwide wars and provocations, which the global oligarchy does in order to write off its debts.

There’s a Russian proverb: “War writes everything off.” In order to write off its debts to Russia, as well as to Europe, Washington provoked the war in Ukraine, and continues to deepen the confrontation. Things have reached the point where Washington’s agents of influence are shelling a nuclear power plant, to raise the temperature of the conflict and create the basis for a clash between Russia and all of NATO: NATO aggression against Russia.

The present nightmarish moment, with the breakdown of the entire system of international law, and of international cooperation, the collapse of the financial system, could have been avoided, if the Democratic Party organization had supported LaRouche as their Presidential candidate many years ago. But, unfortunately, history does not recognize the subjunctive mood. Or, as we tend to put it, no one is a prophet in his own country.

LaRouche’s voice was heard very well. We remember him. In practically all the major countries in the world that today are developing successfully – above all India, and China – there are partisans of LaRouche. They have used his thoughts and ideas, for creating their economic miracles. It is the principles of Physical Economy championed by LaRouche, that today underlie the Chinese economic miracle and are there in the foundations of India’s economic development policy. The supporters of LaRouche in those countries exert a fruitful, very positive, and constructive influence on economic policy-shaping in these leading nations of the new world economic paradigm.

We should not forget the creative legacy of Lyndon LaRouche, which demonstrates the interconnection of events taking place today with their roots many centuries ago. I was always impressed by Lyndon LaRouche’s enormous erudition. He saw the parasitical global oligarchy from its origins, and traced how those oligarchical families were parasites on trade, first in Venice; then they resettled, and continued to build up their financial power, through international trade and global speculation, in Holland; then they relocated to England; and after that, seized control of the political system of the United States.

Lyndon LaRouche saw the totality of world history through the prism of the struggle between the Good – national interests, the interests of improving the general welfare – and the forces of Evil – the world financial oligarchy, which hinders countries’ development, which strives to extract speculative super-profits from trade and economic cooperation, and which deceives the entire world by inflating speculative bubbles, and abuses its positions of power in the countries where it dominates the political system. We see how today’s U.S. financial oligarchy is unleashing hybrid world war, up to and including the risk of a nuclear catastrophe, for the purpose of holding on to its global hegemony.

Lyndon LaRouche’s warnings are coming to pass. It is important, that these warnings are not abstract. They are not simply lines on a graph. I remember the famous [triple] curve, where he showed the growing gap between the size of the world [real] economy and the size of the world financial system. He was the first to make note of this disproportion, which 30 years ago was still not so big; it could still have been overcome by transforming the excess financial aggregates into the real sector – into real investment projects. Now, this is a gigantic abyss. It is impossible today to transform quadrillions of dollars of financial bubbles into investments in the real sector of the economy. There are simply no mechanisms for this. None was created, because the parasitical financial oligarchy, which hated LaRouche, which always tried to shut his mouth, and persecuted him and tried to keep him locked up, ultimately acquired a monopoly on political power in the United States. And today, it uses its political influence in Washington to force all the countries in the world to obey its will. It continues to dominate the world and exert its hegemony for extracting super-profits from speculative operations.

Lyndon LaRouche turned out to be right. Today we rely on his work, his writings, in composing proposals for a very rapid transition to a new world economic paradigm. We call it an integrated world economic model, in which finance capital will be subordinated to the tasks of developing the economy, and in which the principles of Physical Economy will come to fruition. As we can see, countries that are taking this path are enjoying success.

There is no doubt that the ruling American financial oligarchy is losing the hybrid world war, which they have started against all mankind. It’s only regrettable, that the price that has to be paid for this will be very high. That includes the lives being lost as a result of the war that the American and European financial oligarchy organized against Russia on the territory of Ukraine. We have to muster all our forces to fight that evil, and the creative legacy of Lyndon LaRouche helps in this.

May his memory live forever.