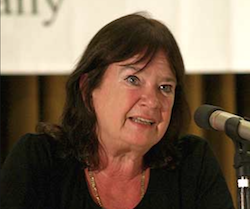 Escalating tensions with Russia, driven by Ukrainian’s suicidal push for NATO membership, U.S. encouragement, and the U.S. military itself, threatens — despite President Biden’s reaching out to President Putin for an in-person summit — to explode into war, nuclear war. A provocative visit of former U.S. government officials to Taiwan adds more fuel to the fire of China’s cross-strait relations. Economic lending into the real economy by U.S. banks withers, even as they are showered with money. Inflation accelerates, and a blowout of the trans-Atlantic financial system is inevitable. Death by starvation stalks the impoverished inhabitants of war-zones Syria and Yemen.

Will these crises culminate in what would become nuclear conflict, a devastation of the human race, or will a new paradigm overthrow the oligarchical structures that drive conflict? What flanks can you create to achieve that happier outcome?

In her weekly Schiller Institute webcast discussion, Helga Zepp-LaRouche responded to the urgent call to the world by Cardinal Mario Zenari in Syria for the world to come to the aid of the Syrian people. More than 90% of Syrians are below the level of extreme poverty, and many are in danger of losing their lives due to famine. (Zenari’s Time is Running Out.) The last decade of war, the unjust sanctions, and the Covid pandemic have created an absolutely intolerable condition of suffering for the Syrian people.

Similar horrors confront Yemen, where the agonizing reality of hunger is conveyed in the powerful documentary {Hunger Ward}, referred to by the head of the World Food Program, David Beasley, who saw children dying before his very eyes in the hospital, and he was unable to help.

In both Syria and Yemen, the results of supposedly “humanitarian interventionist” wars — and there is nothing humanitarian about them! — conducted under the guise of defending the people from murderous governments, are genocidal. Was U.S. military intervention in Syria driven by Assad’s chemical weapon murder of the people there? No, that was not the reason, and the claims about the attacks were not true. As Col. (ret.) Richard Black (USA) has explained, the plan for regime change in Syria was developed ten years before the 2011 destabilization, as part of a policy of regime change in the entire region, comprising Afghanistan, Iraq, Iran, Syria, and Libya.

The narrative about the causes of the war is completely wrong.

But even leaving that aside, start from the current humanitarian situation: “When you have a people about to die, and the world does absolutely nothing, that means the people watching that are {morally unfit to survive.} And I’m crying out to you to help us make a mobilization to get rid of the “Caesar” sanctions and to have the immediate reconstruction of Syria.”

In contrast, the so-called donors’ conference in Brussels raised a few billion dollars, but it was an absolute charade. The funds will {not} go to the Syrian government, but rather to neighboring countries that have taken in refugees, to NGOs, and to opposition groups. But, as Cardinal Zenari says, without a {reconstruction}, there will be no end to the misery. Peace through development is the only way out of the crisis.

And we know how to do this! The Schiller Institute has worked for half a century on plans for the development of Southwest Asia, dating back to Lyndon LaRouche’s 1975 “Oasis Plan” proposal. Since then, the LaRouche movement has developed a plan for Syria (“Project Phoenix“), a plan for Yemen (“Operation Felix“), all in the context of bringing Southwest Asia into a development paradigm of the New Silk Road / Belt and Road Initiative.

Against this potential stands the Caesar sanctions, based on a lie. Photographs supposedly showing victims of torture carried out by the Assad government were used as evidence to push through these brutal sanctions policy. But these photographs were mainly of Syrian soldiers killed by al-Qaeda-linked groups! This is not the first time such fabrications have been presented. Saddam Hussein’s forces were accused of ripping babies out of incubators in Kuwait. This was used to start the 1989 Iraq War. Then we had the “yellow cake” and other supposed evidence of Saddam Hussein’s program to create weapons of mass destruction — again, all lies. Then we had the lies from the White Helmets about the supposed use by Assad of chemical weapons.

Zepp-LaRouche demanded: “This must stop and the Caesar sanctions must be lifted. And all the members of Congress who do not lift these sanctions make themselves complicit in every death that occurs in the region…

“This has reached the point where either the world wakes up and we start to remedy this, or we will not survive, because of our own moral failure as a human species.

“I call on you: work with the Schiller Institute. Work with its Committee on the Coincidence of Opposites, which is working to get aid programs and reconstruction.

“I appeal to you: get in contact with the Schiller Institute and respond to the call by Cardinal Zenari, which has not been covered much at all by the Western press, which alone should show the one-sidedness of the media, which we must overcome.”

Will you answer the call? Become a member of the Schiller Institute and work to make its vision a reality.