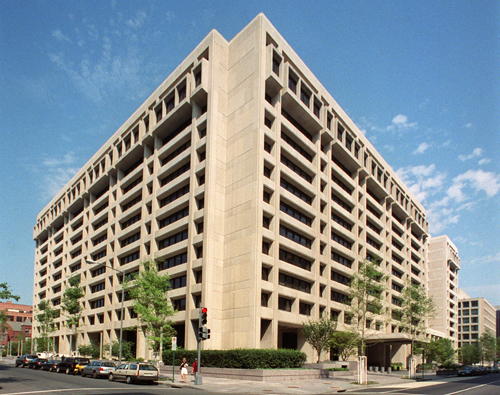 April 12 (EIRNS)–A report issued by the World Bank and the International Monetary Fund on March 25 announced that, as part of the “recovery” from the pandemic, the debt of the world’s poorest countries would now be used as a lever to force furtherance of the Great Reset genocide dictate from the City of London. “This paper discusses World Bank and IMF support for addressing fiscal and debt distress in [the world’s poorest] countries, with emphasis on strong continued concessional [low-interest–ed.] flows for green, resilient, and inclusive development,” reads the introduction, the translated message being, “The only way you will get further assistance, is if you agree to kill your population `to save the planet’.”
As part of this discussion, the report concluded that the G20 should agree to extend their DSSI (Debt Service Suspension Initiative) through to the end of the year, but with one proviso: The G20 had to “publicly commit that this is the last extension of the DSSI,” thus forcing the 49 DSSI-eligible countries to confront their continued (financial) existence head on. As of April 7– two weeks from the IMF/WB dictate– the G20 had complied, both by extending the DSSI (Debt Service Suspension Initiative), {and} by stating that it will be terminated at the end of the year.
This action — of issuing new, non-productive debt to already over-burdened poor nations — is one which is potentially hyper-inflationary, but otherwise perfectly conforms to the terms of the Great Reset. Recognizing this, the IMF/World Bank acknowledge the need for “a holistic approach to the challenge of containing debt vulnerabilities” specifically calling for “direct private sector funding especially non-debt flows,” along with budget austerity on the part of recipient countries. “Emphasis can be given to green priorities and private sector solutions, including green stimulus packages with significant multiplier effects,” they say, as well as revenue-generating “solutions” such as carbon taxes (to kill coal and oil-fired power and heating)..
The report indicates that in October 2020 these institutions’ “Development Community” issued a “mandate to address debt challenges in low-income countries and to do so in a way that supports green, resilient, and inclusive development and poverty reduction” (otherwise known as GRID). That “mandate” had been prompted by an open letter, they say, “[from] the Ministers of the Netherlands, Denmark, France, Spain, Germany and Sweden,” who wrote: “We ask the World Bank and IMF to deliver on a coherent approach to debt restructuring. We need to make sure we do not lose sight of green and inclusive reforms because of limited fiscal space and a looming debt crisis.”