For World Peace: STOP THE DANGER OF NUCLEAR WAR ~ 2nd Seminar of Officials 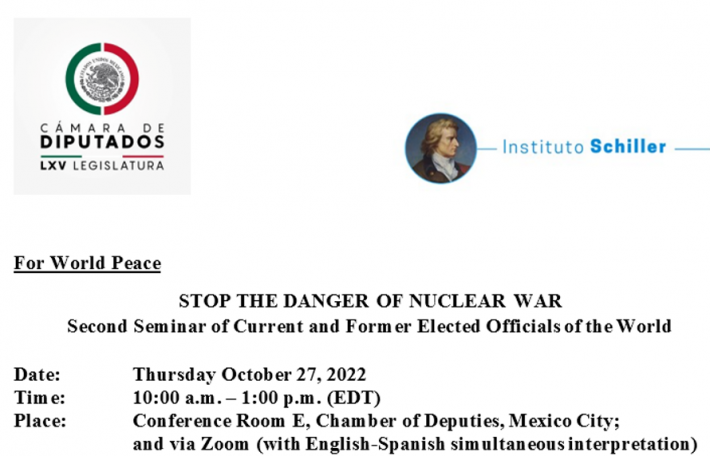 For World Peace: STOP THE DANGER OF NUCLEAR WAR ~ 2nd Seminar of Officials

STOP THE DANGER OF NUCLEAR WAR

Second Seminar of Current and Former Elected Officials of the World

Eight months into the war between Russia and Ukraine, with the active role of the United States and NATO, there are many dead and wounded, great destruction of all sorts of property, and very damaging economic and social consequences in Europe and the whole world, creating shocks which are worsening the very profound problems of the world economy, with consequences of a worsening crisis and greater unemployment, poverty and hunger.

It is known that this war can have far more serious consequences than what we are already suffering, including massive destruction and a crisis of global proportions never before seen, because it can lead to a confrontation with nuclear weapons between Russia and the United States and NATO.

Among the growing voices calling for a sensible approach, we highlight that of Pope Francis, calling for a negotiated, peaceful solution.

The undersigned political and social leaders, current and former legislators, and other elected officials from various countries, urge Russia, Ukraine, the United States and NATO to reach an agreement which, first of all, rejects the growing loose talk about the possible use of nuclear weapons and reaffirms the fundamental commitment of the Reagan-Gorbachev Formula of 1985, that “a nuclear war cannot be won and must never be fought.” To be lasting, such an agreement must also establish a new international security architecture that recognizes and respects the legitimate security interests of all the planet’s nations.

We recognize and emphasize that Russia, like the United States, NATO, Ukraine and all countries, has legitimate security concerns which must be taken into account and become one of the cornerstones of the new security architecture. A return to the successful principles of the 1648 Peace of Westphalia – respect for sovereignty, commitment to the good of the other, and forgiveness of debts that make true economic development impossible – is the kind of architecture we seek today.

The common good of the One Humanity is the obligatory premise for the good of each and every nation. In that way, among all the nations of the world we will be able to help build an organization of citizens in collective global action, and establish ourselves that way as a force to influence the international policy debate.

We call on people of good will around the world – notwithstanding our diverse and natural differences – to participate in this process of deliberation and search for peaceful solutions, including a thorough examination of the alternative economic policies to replace speculation, which has generated so much poverty and suffering, with a system of production and progress to meet the needs of a growing world population.

We reject all attempts to limit, intimidate, or prohibit such a deliberative process. And we call on the United States, NATO, Ukraine and Russia to advance in the direction that we present in this respectful call.