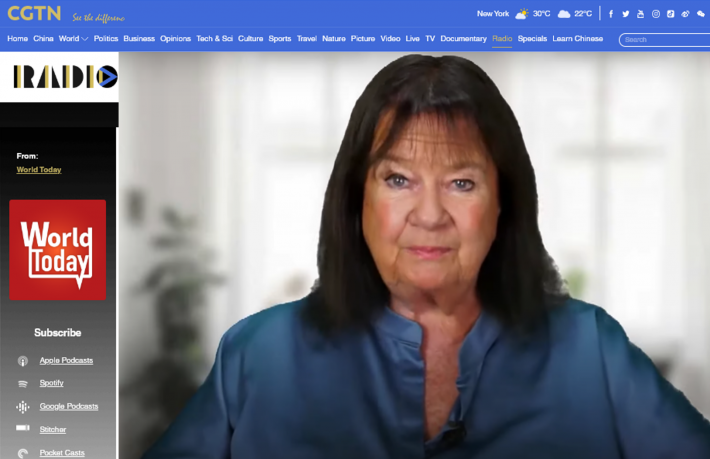 The World Today host began a segment: “Decoupling of the EU and Germany from China could cost Germany almost six times as much as Brexit. This is the finding of a scenario analysis conducted by the Info Institute on behalf of the Bavarian Industry Association. The report shows that automotive industry companies producing transportation equipment and manufacturers of machinery and equipment would be hurt the most if the decoupling happens.

So, for this and more on EU-China and Germany-China relations, let’s have Helga Zepp-LaRouche, the founder of the Schiller Institute, a Germany-based political and economic think tank. Thanks for joining us, Ms. Zepp-LaRouche.

CGTN: Germany would face costs almost six times as high as Brexit if Germany and the European Union were to shut China out of their economies. What do you make of the projections?

ZEPP-LAROUCHE: I think it’s much worse, because as you have mentioned already, there is right now an effort to push Germany and all of Europe into a decoupling from Russia and China. This, in my view, would mean economic suicide. You already have an almost total decoupling from Russia that has led to an explosion of energy prices. You have hyperinflation going on, which is not due to anything having to do with Ukraine or Russia’s war with Ukraine. It has to do with the quantitative easing and pumping of money for many years. So, you have hyperinflation; you have an energy crisis. And now on top of that, if you also would decouple from China, the most important trading partner for Germany, this would mean economic suicide. I think this is something people should review and really step back away from, because it would lead to complete social chaos in Germany and Europe, with unpredictable consequences.

CGTN: The report said the biggest loser of a trade war with China would be the automotive industry, manufacturers of transport equipment and mechanical engineering which have had strong ties with China over the years. With the domestic argument for decoupling getting louder in Germany and the European Union, do we hear any voices from those industries?

ZEPP-LAROUCHE: Well, my personal experience in talking to many of those, is that the individual firms really want to stay in China, but they are being pressured by the banks with their credit policies, the financial sector, and that is all hanging together with Wall Street and the City of London. They have geopolitical motives to push this decoupling. I think if German industry wants to survive, and I really mean survive, because it’s an existential situation which most of them are in, they have to stand up and defend their own interests. They have to fight for the jobs of the people; they have to stand up for German interests and the common good of the people.

I think we are heading into an incredible social crisis in the coming weeks and months. The question is, will Germany economically survive this assault? It’s time for Germany to define its own interests and not be the instrument of NATO.

CGTN: Speaking of that, we heard from Volkswagen’s CEO, who defended [inaud] in China in Xinjiang. What do you make of this, because there are two different opinions nowadays? On the one hand, people say their insistence is only about profit and making money. On the other hand, people believe they see a different Xinjiang in China from the ones mirrored in the Western media. What’s your take?

ZEPP-LAROUCHE: Well, we had two members of the Schiller Institute traveling to Xinjiang and visiting many locations. And many diplomats from many countries also have traveled there to investigate the situation. What all of these people report is that China has brought development into one of the previously poorest areas, and given people jobs, bringing prosperity, infrastructure. So, a lot of people who turned from the Uighurs to terrorism before now have a perspective and a future, and have stopped being terrorists. I think to overcome terrorism through development is a much better method than throwing bombs and drones and having civilian casualties you don’t care about, like it happened so many times in Afghanistan or Iraq, where the United States conducted these things. I think people should not listen to this guy Adrian Zenz, who recently came out with a study. He’s a right-wing Christian fundamentalist who has very dubious beliefs, because he thinks that God gave him a mission to destroy China. All of this anti-Xinjiang propaganda is mainly based on this extremely dubious source. People should not fall for it.

CGTN: Given what we have been talking about, if you also ask a lot of experts in Germany, they suggest that companies should find more countries to reduce dependency on China. How do you look at this suggestion? Can China, as the top trading partner of Germany, be replaced at least in the short term?

ZEPP-LAROUCHE: In the short term, for sure not, because the idea to diversify and have partnerships with so-called “like-minded democracies,” if you really look at it, it’s only the U.S., the British, the countries of the Five Eyes, Japan, New Zealand. But the overwhelming majority is going with China’s BRI. The Shanghai Cooperation Organization, the BRICS, most countries of the Global South want to have development. There is a revival of the spirit of Bandung, which is the Non-Aligned Movement. I think it would be complete suicide for countries like Germany that are very export-dependent to cut off these markets which are the future. The only growth which occurred in the recent period was in Asia, and not in the Atlantic sector. So, Germany should really redefine its own interest.

CGTN: Thank you very much. That’s Helga Zepp-LaRouche, the founder of the Schiller Institute, a Germany-based political and economic think tank.

Here is the link to the interview; this segment is with Mrs. Zepp-LaRouche: ④ Decoupling with China could cost Germany six times as much as Brexit, a study shows at 33:55 min.