Sanctions Crippling the Syria that Was Once Proudly and Steadily Growing 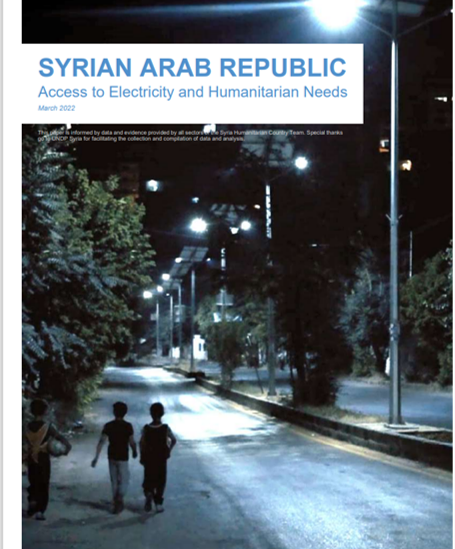 Sanctions Crippling the Syria that Was Once Proudly and Steadily Growing

Aug. 9, 2022 (EIRNS)—The UN Office for the Coordination of Humanitarian Affairs (OCHA) released a study, “Syrian Arab Republic: Access to Electricity and Humanitarian Needs,” in March 2022, documenting meticulously, respecting Syria, what Helga Zepp-LaRouche contends in her July 12, 2022 statement, “Lift Sanctions Against Russia Immediately!”: that sanctions are a “brutal form of warfare” that kill, and must be lifted everywhere they are currently enforced.

In 2011, the European Union enforced sanctions against Syria with the intent to overthrow the country’s President, Bashar al-Assad, following the Bernard Lewis Plan overthrow and eventual killing of the leaders of Iraq and Libya. Britain, the U.S., and other nations joined the sanctions regime, and the range of sectors of the Syrian economy against which they were applied was expanded. The U.S. and other nations carried out military intervention in Syria in 2011, first using proxy terrorist groups, then directly.

“As a result of this damage, the country’s electricity generation capacity fell from 5,800 MW in 2010… to 4,000 MW in 2018.”  The further tightening of sanctions caused Syria’s installed electricity generation capacity to fall to 2,000 MW in 2021, a collapse of 63%! Obtaining replacement parts and maintaining the surviving plants, due to sanctions, has become even more acute. Whereas, in 2010, “93% of the country had access to electricity,” that is sharply down today. Compared to 2010 standards, today’s Syrian population consumes 85% less electricity per capita, twelve years later. Thirty percent of Syria’s population has access to electricity for only 2 hours per day. That slashes electricity to industry, and households, and all the equipment that goes with that.

But electricity is the source for powering all other features of society. Around 2010, “access to safe drinking water in Syria was estimated at 92% in rural communities and 98% in urban centers. Seven major water systems serve the country’s eight largest cities…. However,” the study emphasizes, “by 2019 annual public water production in Syria had fallen by 40% relative to pre-crisis levels (from 1,700 Mn cubic meters in 2010 to 1,020 Mn cubic meters in 2019.” But to use water from groundwater and springs, or most rivers, requires continuous electricity to pump water and distribute it, a commodity Syria now lacks as the study highlights.

The lack of electricity (and water) also means there is sometimes insufficient power to run medical facilities and health clinics. Because of damage to infrastructure, Syria runs its schools on two shifts. In the second shift, in particular, often there is no clean water in the bathrooms, and not enough electricity to heat the schools. Some students study at home by candlelight.

The OCHA’s ReliefWeb website reported March 12, 2022, “this year, 90 percent of Syrians live below the poverty line, and more than 80 percent are food insecure. Families say they are eating less, cutting meals, and going into debt to meet their basic needs.” {Emphasis added.}

As Zepp-LaRouche says in her July 12 statement, sanctions “are a brutal form of warfare against the respective populations of the sanctioned states with the aim of making their living conditions so intolerable that they rise up against their respective leaderships, and overthrow them. But the victims are always the people.” It is past time to lift them in Russia, Syria, and everywhere.