Tulsi Gabbard Tells Americans to Wake Up to Nuclear War Danger, Threats to Freedom of Speech 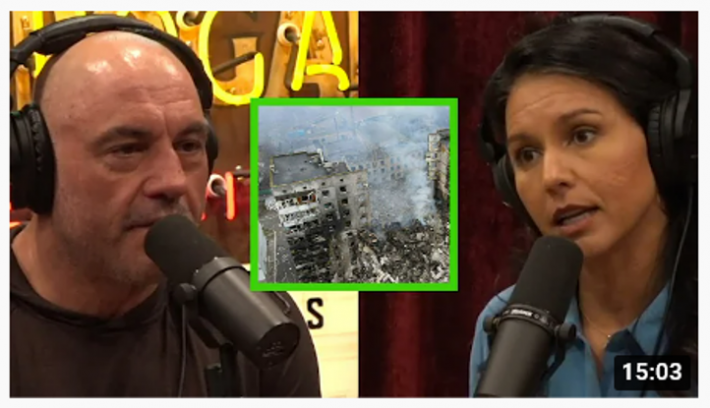 Tulsi Gabbard Tells Americans to Wake Up to Nuclear War Danger, Threats to Freedom of Speech

Oct. 12, 2022 (EIRNS)–Former Democratic presidential pre-candidate Tulsi Gabbard is using the flurry of political attention generated by her announcement that she has walked out of the Democratic Party, to raise the alarm bells on those two strategic points.

In her appearance on Joe Rogan’s show, a podcaster and comedian whose podcasts average about 11 million viewers per episode, Gabbard focused on the imminent danger of nuclear war with Russia, which she argued is not provoked by Vladimir Putin, but by the United States and some European nations in NATO which are using the Ukrainian military and people as ‘chess pieces’ with the aim of regime change in Russia.

The military-industrial complex is happy to send all those weapons to Ukraine, but, she asked, “if we vote to send these billions of dollars to Ukraine, is that strengthening our national security or undermining it?”

She charged: “What we’re seeing now is essentially a proxy war. The US is engaging in a proxy war with Russia using Ukraine essentially as their military.” US leaders pushing to prolong the Ukraine war have “put us in the most dangerous position we the American people and the world has ever been in, in that a nuclear war could break out in a week.”

She dismissed the idea that nuclear war could be limited: “Whether they‘re tactical or strategic nukes, it doesn’t matter, there is no way to win this. That would spark a nuclear war, World War Three, and the result of that is the destruction of the world as we know it…. People need to know that this is the reality we are facing. Our leaders have pushed us and led us to the brink of nuclear war. They have their own bunkers and way to protect themselves. There is no shelter for the American people.”

Rogan and Gabbard discussed how Hawaiians discovered in 2018 when a “false” incoming missile alert was set off over the island that “there’s no place where you can take your loved ones and your kids to be protected not only from the blast, but the fallout, the lack of food and water….” They broadcast for viewers the absurd Public Service Announcement put out by New York City authorities in July, which told viewers they would be safe if they did three things in case of a nuclear attack: (1) Get inside. (2) Stay inside. (3) Stay tuned in. In outrage, the two asked stay tuned to what?

Instead, Gabbard insisted: “The United States and some of these European NATO countries are fuelling this war and need to provide the leadership to bring about a negotiated outcome. That is what needs to happen here to prevent the destruction of the planet and life as we know it. They’re not doing that and they are failing the American people and putting us in this position of not knowing where we’re going to be in the event this kicks off.”

In her appearance on Fox News’s Tucker Carlson show the same night, Tulsi tied the failure of American people to stand up against this imminent danger of nuclear war to witch-hunt against anyone breaking with the official narrative:

“The whole environment of fear that those in power, these elitists in power, have fomented to where people are afraid to speak the truth… They’re afraid to exercise their right to free speech because, hey, you might lose your job, you might be canceled, you might be trashed. And God forbid in Washington, you might not be invited to the cool kids parties. You might not be as popular,” Gabbard charged. So rather than “taking a stand standing up for peace … we have too many people who are war-mongers subservient to the military-industrial complex… with no mind to the costs and consequences of their decisions which are actively pushing us to the brink of nuclear holocaust…”

The 15-minute clip of the nuclear discussion in Gabbard’s appearance on the Rogan show had over two million views within 24 hours of its posting on his YouTube channel https://youtu.be/rAfwpfUBw1M