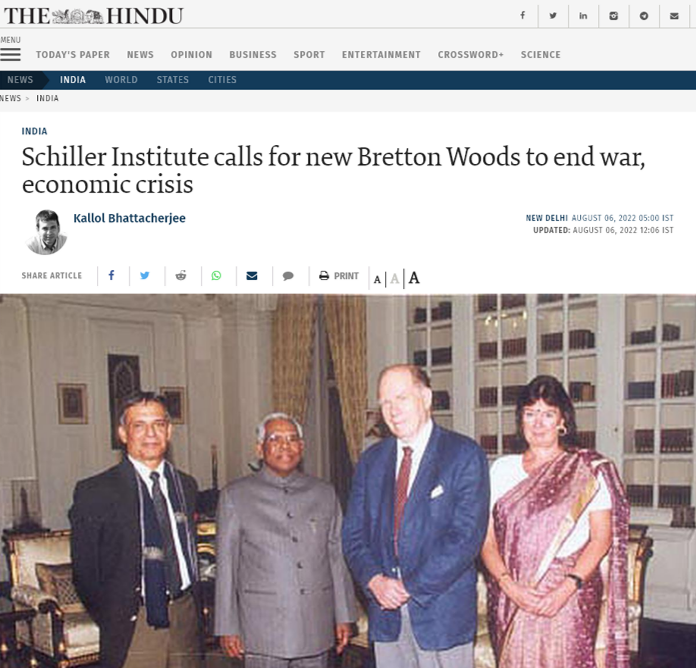 Aug. 6 (EIRNS)—Under the striking headline, “Schiller Institute Calls for New Bretton Woods To End War, Economic Crisis,” one of India’s leading dailies, The Hindu, today published a thorough article on its interview with Schiller Institute founder Helga Zepp-LaRouche, who detailed the role played by her late husband Lyndon LaRouche in shaping the policies for a New International Economic Order and the Non-Aligned Movement (NAM), as well as his close relationship to India dating back to the time of his World War II service in the China-India-Myanmar theater, and his and Helga Zepp-LaRouche’s personal friendship with Prime Minister Indira Gandhi. The Hindu article was illustrated with a prominent photograph of a 2001 meeting of Mr. and Mrs. LaRouche with then President K.R. Narayanan at the presidential offices.

The Hindu began by pointing out that the “global thinktank, Schiller Institute, that recently hit the headlines for organizing an international conference on the Ukraine war and economic crisis,” was shaped by the late economist Lyndon LaRouche. The Schiller Institute’s global conference last April 9 included three prominent Indians among its speakers: retired diplomat P.S. Raghavan (who was scheduled to speak but was unable to attend), journalist Saeed Naqvi, and Sam Pitroda. Subsequently, “it came under attack from Ukraine’s Center for Countering Disinformation that fights online Russian propaganda, [which] released a list of 75 commentators, including the three Indians, whom they accused of promoting Russian propaganda.”

Mrs. Zepp-LaRouche elaborated in some detail her late husband’s role in shaping policy debate in the Non-Aligned Movement (NAM). She reported that, after Richard Nixon dismantled the Bretton Woods system in August 1971, her husband warned that the so-called “Nixon Shock” would encourage speculation-driven economic activities and greater inequality, and that he “wrote in favor of the developing economies. Some of those ideas found expression in the 1976 Colombo resolution of the fifth NAM summit that called for a New International Economic Order (NIEO) to help the non-aligned countries,” The Hindu reported. The effects of that “Nixon shock” are still being felt today, Mrs. Zepp-LaRouche asserted.

That the New International Order didn’t come into being was due to many factors, Mrs. Zepp-LaRouche explained, but stressed that when she and her husband met with Indira Gandhi, the Prime Minister showed great interest in “having economic ideas that would safeguard India from the volatilities of international finances” that had affected so many other developing countries. Following Mrs. Gandhi’s assassination in 1984, Mr. LaRouche authored the book Derivative Assassination examining the global dimensions of Khalistani terrorism that might have played a role in her murder. Even after her death, the LaRouches visited India on several occasions and met with such prominent economists as the late Arjun Sengupta and with President K.R. Narayanan in 2001.

In the interview, Mrs. Zepp-LaRouche remarked that the “LaRouche tradition” within the NAM didn’t progress for a number of reasons, including the assassinations of Mrs. Gandhi in 1984 and of her son and successor Rajiv Gandhi in 1991, and the “interventionist wars” launched by the West in Syria, Libya, Iraq and Afghanistan, whose chief architect was U.S. President George H.W. Bush, were largely responsible for the global turmoil that made such progress impossible.

Despite the crisis in Ukraine and the global financial crisis, Mrs. Zepp-LaRouche is hopeful that there is now a reemergence of non-alignment and other positive traditions, The Hindu reported, while warning that Western leaders failed to deal with earlier crises such as the 2008 Lehman Brothers crash, and that the crisis today is such that it could lead to a “blowout of the neoliberal system.”

Look at the West’s treatment of Russia, she said. When the U.S.S.R. collapsed, the Schiller Institute proposed a development corridor—the Eurasian Land-Bridge—that would have helped in economic development. Instead, Western powers adopted a strategy of destroying Russia, treating it as a “regional power,” planning to reduce it to the status of a raw-materials producing “ex-superpower.” These Western policy errors continue to this day, she warned, telling The Hindu, “If we don’t get the United States and Europe onto a new track, toward a new system [New Bretton Woods,] the war danger only worsens.”