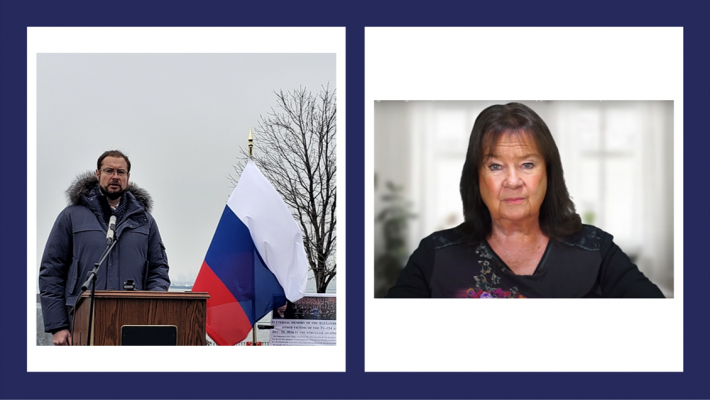 Ambassador Dmitry Chumakov, Deputy Permanent Representative of the Russian Federation to the United Nations, and Helga Zepp-LaRouche, Founder of the International Schiller Institute, Delivered Statements at the Memorial Wreath Laying Ceremony in Honor of the Alexandrov Ensemble and Other Victims of TU-154 Plane Crash

Ambassador Dmitry Chumakov, Deputy Permanent Representative of the Russian Federation to the United Nations, and Helga Zepp-LaRouche, founder of the international Schiller Institute gave keynote remarks on December 29, 2021, at a memorial event in honor of the Alexandrov Ensemble members who were killed in a plane crash on Christmas Day, 2016.  The members of the renowned Alexandrov Ensemble – previously the Red Army Chorus — were on their way to perform in Syria during the Syrian war.    The commemoration took place at the Teardrop Memorial in Bayonne, NJ – a monument donated and built by the Russian people and government in condolence to Americans for the tragedy of 9/11.  The monument is named, “To the Struggle Against World Terrorism.” Ambassador Chumakov’s are found here.

Ambassador Chumakov’s remarks, available now on the website of the Permanent Mission of the Russian Federation to the United Nations, noted that the cultural collaboration of the Russian and American people in events such as this yearly commemoration of the loss of the Alexandrov Ensemble,  shows “that human relations and friendly ties between Russians and Americans are indissoluble.”  He concluded that “Amidst a very complicated international situation, it is the humanitarian ties that strongly bring us together,” and noted particularly to the Schiller Institute and the Fire Department of the City of Bayonne that “Your contribution to the friendship and solidarity of the people of Russia and the United States cannot be overestimated.”

Helga Zepp-LaRouche’s remarks, read by Diane Sare, founder of the Schiller Institute NY Community Chorus, referenced President Putin’s recent interventions, and bluntly described the danger of a “reverse Cuban Missile Crisis to which the President of your country has reacted in an unmistakable fashion: he insists, rightfully, that the promises given to Russia around the time of the German Unification, that NATO would not move eastward, closer to the borders of Russia” …  “were [promises which were] broken repeatedly”, and that they be “now belatedly” “restated in a written and legally binding form — at least as it concerns Ukraine and Georgia.” She closed: “The Schiller Institute fully endorses the demand by Russia that these treaties must be signed, and that the world must be pulled back from the brink of the abyss. …  Let us revive the spirit of the cultural contribution of the Alexandrov Ensemble to mobilize the strength in ourselves to create a more human civilization!” Mrs. LaRouche’s full remarks are available at this link.

The event was moderated by Capt. Randy Geis of the City of Bayonne Fire Department, and the invocation and benediction prayers were presented by Reverend Dorothy Patterson of Bayonne, NJ.  The laying of the wreath at the Teardrop Memorial was led by the Bayonne Fire Department, followed by a public laying of flowers to the Alexandrov and to all victims of world terrorism, added at the base of the Teardrop Memorial.  Musical selections included Russian songs sung by soloists Everett Suttle, Michelle Erin, and Lisa Bryce; the Christmas Spiritual “Sister Mary had-a but One Child,” arranged by Roland Hayes; and Grechaninov’s “Praise Ye the Name of the Lord.”

The video of the event is available on the Schiller Institute NYC Chorus website.