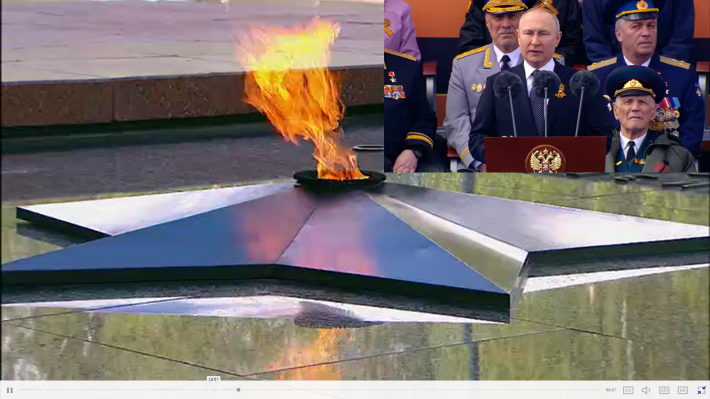 May 9, 2022 (EIRNS)—“There is no family in Russia that was not burnt by the Great Patriotic War; its memory never fades,” said Russian President Putin at the Victory Day parade in Moscow.

He explained that NATO’s proxy war against Russia demanded that his nation take action:

“[D]espite all controversies in international relations, Russia has always advocated the establishment of an equal and indivisible security system which is critically needed for the entire international community.

“Last December we proposed signing a treaty on security guarantees. Russia urged the West to hold an honest dialogue in search for meaningful and compromising solutions, and to take account of each other’s interests. All in vain. NATO countries did not want to heed us, which means they had totally different plans. And we saw it.

“Another punitive operation in Donbass, an invasion of our historic lands, including Crimea, was openly in the making. Kyiv declared that it could attain nuclear weapons. The NATO bloc launched an active military build-up on the territories adjacent to us.

“Thus, an absolutely unacceptable threat to us was steadily being created right on our borders. There was every indication that a clash with neo-Nazis and Banderites backed by the United States and their minions was unavoidable.

“Let me repeat, we saw the military infrastructure being built up, hundreds of foreign advisors starting work, and regular supplies of cutting-edge weaponry being delivered from NATO countries. The threat grew every day.

“Russia launched a pre-emptive strike at the aggression. It was a forced, timely and the only correct decision. A decision by a sovereign, strong and independent country.”

(In a sense, Ukrainian military forces had already started the war, through a dramatic increase in strikes in the Donbass republics, as determined by the OSCE Special Monitoring Mission to Ukraine.)

After reviewing past heroic acts of the armed forces, he spoke to the present and the past, together:

“I am addressing our Armed Forces and Donbass militia. You are fighting for our Motherland, its future, so that nobody forgets the lessons of World War II, so that there is no place in the world for torturers, death squads and Nazis.

“Today, we bow our heads to the sacred memory of all those who lost their lives in the Great Patriotic War, the memories of the sons, daughters, fathers, mothers, grandfathers, husbands, wives, brothers, sisters, relatives and friends.

“We bow our heads to the memory of the Odessa martyrs who were burned alive in the House of Trade Unions in May 2014, to the memory of the old people, women and children of Donbass who were killed in atrocious and barbaric shelling by neo-Nazis. We bow our heads to our fighting comrades who died a brave death in the righteous battle—for Russia.” Pres. Putin’s full speech is here.  Putin’s speech did not announce any new initiatives in Ukraine, a declaration of war against that country, or a military draft.