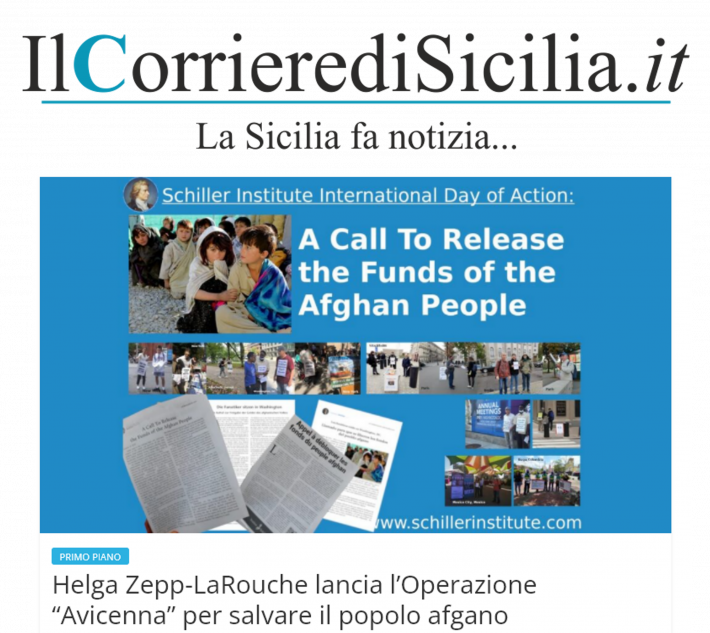 MILAN, Nov. 23, 2021 (EIRNS)—Alessia Ruggeri, chairwoman of UPI Italia, an association of small and medium-sized enterprises, and a renowned trade unionist in Sicily, today endorsed Helga Zepp-LaRouche’s proposed “Operation Ibn Sina” for Afghanistan with a press release which was published today in Il Corriere di Sicilia, a daily read in all of Sicily and is expected to be published in the next days in other Southern Italian papers. {Read the article here.} The press release is entitled “Helga Zepp-LaRouche launches Operation Ibn Sina to save the Afghan people” and reads:

“The Committee for the Republic, through its spokeswoman Alessia Ruggeri, endorsed the Ibn Sina initiative of the Schiller Institute. ’I believe that the world is experiencing a quite sad political, economic and social moment, with the complicity of mainstream media. We have to regain the lucidity and ability to intervene in support of a right cause. The Afghan people are paying the price of international geopolitical strategies which deny their inalienable rights guaranteed by the UN Charter.

“ ‘I therefore accept with great honor the invitation of the Committee for the Coincidence of Opposites to be a part of it and give a significant European contribution,’ Alessia Ruggeri concludes, thanking Liliana Gorini, chairwoman of Movisol, an Italian political party inspired by Lyndon LaRouche.

“Also the lawyer Roberto Zappia endorses the appeal in support of the Afghan people, first exploited for the affirmation of the territorial and political hegemony of the world powers and subsequently abandoned to the voracity of the finance and to its cynical ruthless logics.”

The press release goes on to quote Helga Zepp-LaRouche on Operation Ibn Sina from the recent Schiller Institute conference and Dr. Joycelyn Elders on the recent activities of the Committee Coincidence of Opposites, particularly in Africa. {See Dr. Elders’ call, Open Letter to Virologists and Medical Experts.}