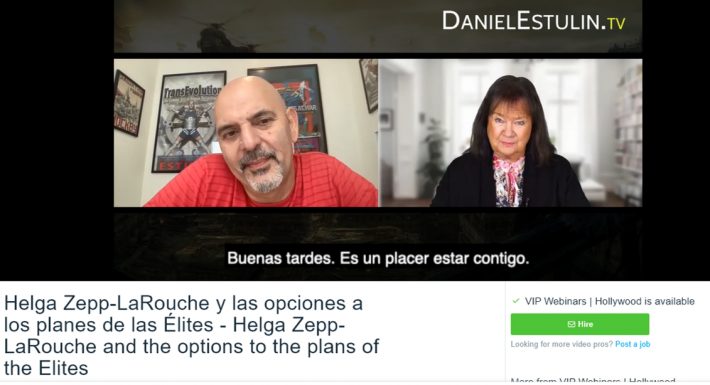 Nov. 10 (EIRNS)—Schiller Institute founder Helga Zepp-LaRouche was interviewed by investigative journalist and author Daniel Estulin, the full 45-minute version of which was posted today here: https://vimeo.com/642101361. What follows is a transcription of the opening exchange.

Daniel Estulin: Good afternoon, ladies and gentlemen, thanks for joining us. This is Daniel Estulin and welcome to DanielEstulin.TV. Today we have an amazing guest. It’s an honor, an absolute honor—I’m a huge fan—to have her with us, Helga Zepp-LaRouche, Lyndon LaRouche’s wife, a founder of the Schiller Institute and one of the foremost experts in the world on Nicholas of Cusa. Helga, thank you so much for joining us. Good afternoon.

Helga Zepp-LaRouche: Good afternoon. It’s a pleasure to be with you.

Estulin: Thank you. I want to start off asking you about your “Wake-Up Call” you just issued. Why the urgency and why now?

Zepp-LaRouche: Well, because I think the world is sitting on a powder keg. If you watch, for example, the tension rising between the United States and China, in particular, but also between the United States and Russia, it’s very clear that the war danger is very acute and very few people are actually warning of it, but the majority of the population has no idea. And people are concerned about energy prices, about not finding an apartment, about all kinds of issues which all have their merit. But most people overlook the fact that we are in a systemic collapse.

Out of that systemic collapse, which goes along with the hyperinflationary blowout of the system, which goes along with the new energy hoax, you know, the gas price hoax—these gas prices could go down immediately if there would be the political will to do so. All of this is the reflection of a systemic collapse. Obviously the overwhelming dynamic is the Great Reset shifting the trillions Green New Deal, trying to direct all investments into green technologies. That is basically based on an image of Man, which regards human beings as parasites, as CO₂ footprints, as just a burden to Mother Nature. And I wanted to counterpose that with an image of Man which, in my view, is in cohesion both with the image of Plato, the image of Christianity, of Judaism, of Islam and real science. Because I think that the human being is differentiated from animals in all other living beings by the power of creative reason. And that creative reason enables Man to again and again make discoveries of physical principles, which you call scientific progress. And when you apply that scientific progress in the production process through technologies, it leads to an increase of the living standard, increase of longevity, increase of population potential. And I think that that particular image of Man as a creative human being is in cohesion with the lawfulness of the universe.

So what I wanted to accomplish—together with Guus Berkhout—we wanted to accomplish is, to, on the one side, basically say all these many concerns should be seen in a larger context. That we are in danger of sleepwalking into a new catastrophe, and counterpose that with the most beautiful conception of the image of Man, which comes from the humanist tradition of European civilization going back to classical Greek, the Italian Renaissance, to Friedrich Schiller, from whom the Schiller Institute is named. And I thought it was important to reduce the very complex world picture to these two fundamental points: the existential danger in which we are, but also the optimism which comes from realizing what human beings are.