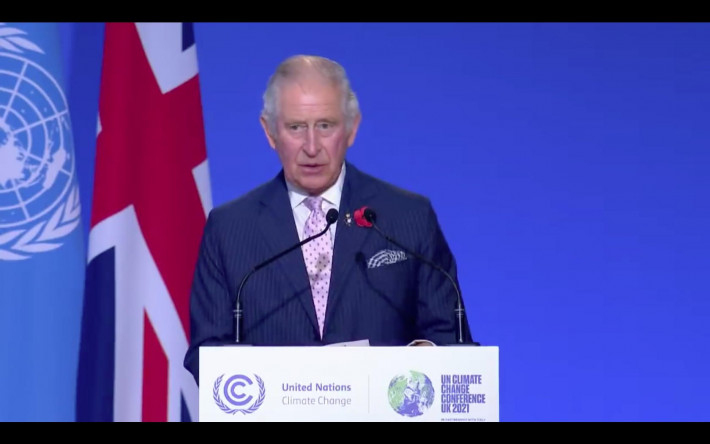 Nov. 2, 2021 (EIRNS)—While the Queen ensured that Prince Phillip’s virus hovered visibly over the proceedings, recording her video for the Royal Family’s reception for the world leaders gathered to open COP 26 with the late His Royal Virus’s picture prominently next to her, Prince Charles well saluted his father’s Nazi-like approach to depopulation, demanding that this be accomplished by replacing governments by a global system of private interests imposed through “a vast military-style campaign.”

Twice he insisted that “a war-like footing” be adopted. “Climate change and biodiversity loss … pose an even greater existential threat than the COVID-19 pandemic, to the extent that we have to put ourselves on a war-like footing,” Prince Charles asserted from the outset. “We know what we must do. With a growing global population creating ever increasing demand on the planet’s finite resources, we have to reduce emissions urgently, and take action to tackle the carbon already in the atmosphere, including from coal powered power systems….”

“Our efforts cannot be a series of independent initiatives running in parallel; the scale and scope of the threat we face, call for a global systems-level solution, based on radically transforming our current fossil fuel-based economy to one that is genuinely renewable and sustainable….

“We know this will take trillions, not billions of dollars. We also know that countries, many of whom are burdened by growing levels of debt, simply cannot afford to go green. Here what is needed is a vast military-style campaign to marshal the strength of the global private sector. With trillions at its disposal, far beyond global GDP, and with the greatest respect, beyond even the governments of the world’s leaders, it offers the only real prospect of achieving fundamental economic transition,” he concluded. His ghoulish speech can be found here,

HRH’s reference to a military approach is not mere metaphor. As EIR reported in its Oct. 1, 2021, Daily Alert, the British Crown’s premier policymaking think tank, the Royal Institute for International Affairs (RIIA)—known as Chatham House—had just published a paper, “Building Global Climate Security,” arguing that since climate change poses such a serious threat to global security, it will now be necessary to rethink “traditional security concepts,” because climate change is “the most serious threat to global security we face,” and the “security community” is going to play a major role in enforcing green fascism and depopulation. For example: the RIIA paper enthusiastically noted that since there are growing calls to legally define “ecocide” as a crime under the International Criminal Court (ICC), the chance of the armed forces being called on to defend against ecocide “looks increasingly likely.”