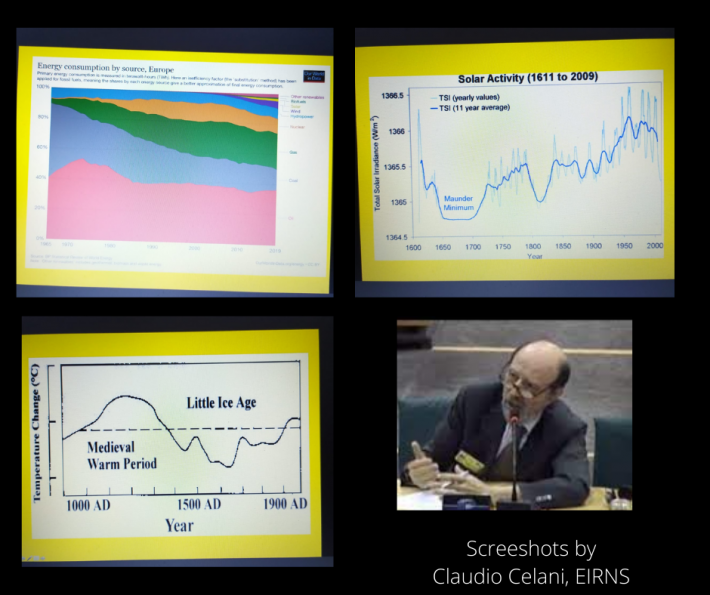 The second “Dialogue on Climate” webinar took place in Italy yesterday, with professors Franco Battaglia and Franco Prodi as speakers. Prof. Battaglia is a teacher of physics and chemistry at the Modena University, while prof. Prodi, brother of Italy’s former Prime minister Romano, is teacher of Physics of the Atmosphere at the University of Bologna.

Prof. Battaglia demonstrated in a conclusive way that all forecasts of the IPCC have been wrong. “Nobody can deny that human activity has produced CO2, but this is not the cause of climate change”, he said. We are in the end phase of a mini-glacial era, and global warming has already occurred in the past, when there was no anthropogenic CO2 production.

Solar and wind energy will never be able to replace other energy sources, which today represent 80% of the energy mix. The insanity of renewables can be shown in Italy, where ca. 100 billion euro have been invested for photovoltaic parks that produce 2.6 GW of power, whereas one nuclear power plant would produce 3 Gw and would cost one tenth of it! Battaglia revealed that when he was advisor to Environment minister Altero Matteoli, the latter asked him whether he should sign the Kyoto protocol. Don’t sign it, Battaglia told him. Nobel prize winner Carlo Rubbia also told me so, Matteoli confessed – but eventually signed the Protocol.

Prof. Prodi went into a long and detailed explanation on how the formation of clouds affects the climate. This is a complex and articulated system, but the IPCC focuses only on some aspects, neglecting some very influential factors.

During the Q&A period, former minister Carlo Giovanardi asked why scientists who argue against the IPCC are excluded from the public debate.

Prof. Alberto Prestininzi, who moderated the event, answered that “there is a direction. When economic leaders get together…. if the EU decides that one trillion Euro should go to decarbonization”. Prof. Renato Ricci, honorary chairman of the Italian Physics Society, commented that it is “big finance” behind the so-called climate emergency.

Claudio Celani from EIR intervened in support of prof. Ricci explaining that the climate emergency is a pretext to create a new financial bubble in the attempt to save the bankrupt financial system. The origin of climate activism and environmentalism is neo malthusianism, and answering Sen. Giovanardi, Celani said that politicians have a responsibility for having accepted a decades-long slide into the current regime.

Celani’s remarks were backed by prof. Mario Giaccio, an economist, who said that he agrees about neo malthusianism and went into a description on how liquidity has moved into energy assets, creating the bubble. However, he concluded with the pessimistic remark that you cannot do anything against it because they are too strong!

Prof. Prodi intervened saying that he has been ostracized by media because of his “negationist” views, and the situation in the scientific community is “more rotten than you think”, almost as rotten as in the financial system.

There will be a “Climate Dialogues” Webinar every other week between now and October.

The science of climate change is not settled, and much of what is presented is not based on science at all. Leading scientists with the integrity and courage to buck dangerous “popular” dogma will discuss so-called manmade climate change, and the most-advanced science including the galactic science of astronomical-scale oscillations at the upcoming Schiller Institute/ICLC conference. The suicidal trend in some European countries to stick with anti-nuclear attitudes will also be discussed.