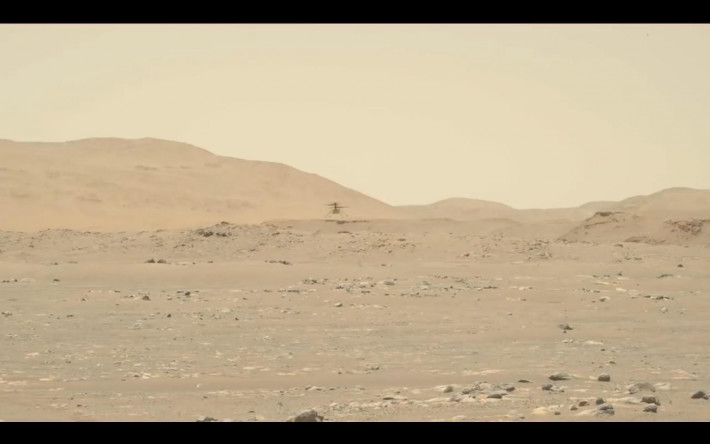 April 25 (EIRNS)—NASA’s Ingenuity helicopter had a third outstanding test flight on Mars—it lifted off at about 1:30 am EDT (12:33 pm Mars Local Time), rising to an altitude of about 16 feet (5 meters), which was the same as its second flight—but then, it {really} took off! Moving at a top speed of 4.5 mph (2 meters/second) it zipped downrange 164 feet (about 50 meters)—nearly half the length of a football field. Its flight lasted about 80 seconds.

As data from Mars started streaming in at around 10:15 am EDT, the mission team at NASA’s Jet Propulsion Laboratory in California was ecstatic, anticipating that the data would not only facilitate additional Ingenuity flights, but possibly inform new designs for rotorcraft on Mars in the future.

To say this involves fine tuning and precise execution of complicated commands is an understatement.

The helicopter’s black-and-white navigation camera tracks surface features below, and the images are processed onboard; its flight computer autonomously flies the craft based on instructions sent up hours before data is received back on Earth—radio instructions to Mars can take anywhere from 5 to 20 minutes, depending on the relative position of the two planets. As Ingenuity flies greater distances, more images are taken, and if it goes too fast, the flight algorithm can’t track surface features. Additionally, the camera needs to track images clearly; dust can obscure the images and interfere with its performance, and the software must perform all of this consistently and flawlessly.

The Mastcam-Z imager aboard NASA’s Perseverance Mars rover, which serves as a communications base station, captured a video of Ingenuity’s flight, and in the days ahead, segments of that video will be sent back to Earth.

NASA reported, “Today’s flight was what we planned for, and yet it was nothing short of amazing,” said Dave Lavery, the project’s program executive for Ingenuity Mars Helicopter at NASA Headquarters in Washington. “With this flight, we are demonstrating critical capabilities that will enable the addition of an aerial dimension to future Mars missions.”

With this third successful flight under their belts, the mission team is looking forward to planning Ingenuity’s fourth flight in a few days’ time.