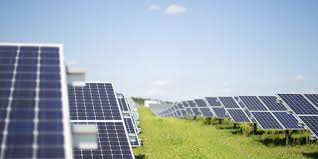 How Much of U.S. Must Be Covered by Windmills and Solar Panels To ‘Decarbonize’ the Nation?

Feb. 27 (EIRNS)—According to a 345-page study called “Net-Zero America,” released on Dec. 15, 2020 by a team from two environmental centers at Princeton University, land-based windmills and solar farms might have to cover some 231,660 square miles of U.S. territory by the year 2050, for the U.S. economy to be net-zero in emitting “heat-trapping gasses.” Think of it: An area slightly larger than the combined states of Minnesota, Wisconsin and Illinois, covered over by inefficient energy technologies from the 14th century which have a well-proven track record of failing when most needed.

City of London weekly The Economist carries a 3,500-word monster article this week, discussing the ins-and-outs of “Decarbonising America: Joe Biden’s Climate-Friendly Energy Revolution,” promotes the Princeton study, and particularly its most solar- and wind-dependent proposal.

The study details five different “pathways” through which to reduce the U.S. economy to net-zero emissions, and brags that it is the first study to lay out options with great “granularity,” by which they mean, proposing very specific ideas for every geographic area of the country (e.g. maps showing where solar and wind farms might be located around different cities). Barack Obama’s anti-science advisor John Holdren explains in his Foreword to the study, that the intent of detailing the “multiple plausible and affordable pathways available” for decarbonizing the economy, is to induce Americans to fixate on discussing details of what kind of energy technology should go where (Rhode Island or Washington, D.C. would have to be covered with solar panels, in order to provide enough electricity for people to live and work there; but then, they couldn’t live or work there), and drop all debate over how the entire scheme itself means economic suicide and Malthusian population reduction. As Holdren puts it, with this report, “the societal conversation can now turn from ‘if’ to ‘how’ and focus on the choices the nation and its myriad stakeholders wish to make to shape the transition to net-zero.”

EIR has not read every “granular” detail of the study, but its summary reports that all five “pathways” assume that the share of electricity from “carbon-free sources” will have to roughly double from around 37% today to 70-85% by 2030, and reach 98-100% by 2050. Wind and solar power are to be the dominant source of energy in all their scenarios, with wind and solar farms providing about half of all U.S. electricity by 2030—up from 9% in 2019. Miles and miles of new transmission lines would be needed to shift the unreliable electricity supply around; the Princeton crew estimates that high-voltage transmission capacity would have to jump by 60% over the course of the coming decade. Naturally, we will have to pay through the nose to kill ourselves; the study authors estimate at least $2.5 trillion in additional capital investment will be needed over the next decade. See EIR’s special report, https://larouchepub.com/special_report/2021/green-new-deal/index.html.