Helga Zepp-LaRouche Statement on the Assassination of Qasem Soleimani 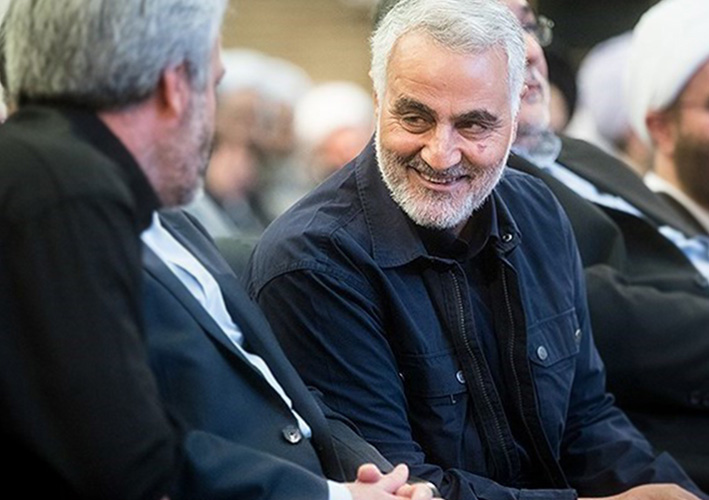 Helga Zepp-LaRouche Statement on the Assassination of Qasem Soleimani

by Helga Zepp-LaRouche, founder of the Schiller Institute

Immediate Emergency Summit Among Presidents of US, Russia and China to Save World Peace and Define Cooperation Among the Countries Who defeated Fascism 75 Years Ago!

With the assassination on Jan. 3 of Iranian Maj. Gen. Qasem Soleimani, Commander of the Revolutionary Guards Quds Brigade and a national hero in Iran, as well as Abu Mahdi al-Muhandis, the deputy commander of the Popular Mobilization Forces of Iraq, through a drone attack near the Baghdad International Airport, the world is confronted with the danger of an escalation of retaliations and counter-retaliations, which could not only lead to a war in the entire southwest Asian region, but beyond.

The Pentagon issued a statement, accompanying President Trump’s signing of the attack order, that Soleimani “was actively developing plans to attack American diplomats and service members in Iraq and throughout the region.” The statement claims that General Soleimani and his Quds Force were responsible for the death of hundreds of Americans and wounding of thousands more, and that the strike was aimed at deterring future Iranian attack plans.

As the spokeswoman of the Russian Foreign Ministry, Maria Zakharova, pointed out, it was the UN Security Council’s purview to make a legal assessment of attacks on countries’ embassies, and that Washington had not requested an extraordinary UN Security Council meeting on the issue. Obviously the Pentagon did not see a need to do that, since the 2001 AUMF makes it legal for the US military to attack any armed group deemed to be a terrorist threat. The official designation as “terrorist” of the IRGC in April 2019 by the US State Department—a move which was strongly supported by then National Security Adviser John Bolton and Secretary of State Mike Pompeo—made it “legal” for the US Armed Forces to attack individuals associated with the IRGC under any circumstances that may occur. At that point Col. Pat Lang wrote in his blog:

“The neocon nitwits (Pompeo, Bolton, Hannah, etc.) may think that Iran’s reaction to this declaration of war will be submission to their will, but IMO [in my opinion] that is very unlikely. IMO it is more likely that the IRGC will absorb the new reality and will prepare for war with the US.”

Unfortunately, with the assassination of Soleimani, Col. Lang’s warning that the Foreign Terrorist Organization (FTO) designation could lead to a war with Iran has come closer to coming true. So, while Bolton is out of the administration, his confrontational policies have created a very dangerous heritage—a set up for war—for Trump. And, no surprise, Bolton said in a twitter posting this morning: “Congratulations to all involved in eliminating Qassem Soleimani. Long in the making, this was a decisive blow against Iran’s malign Quds Force activities worldwide. Hope this is the first step to regime change in Tehran.”

As would be expected, Iran’s Supreme leader, Ali Khamenei, promised “harsh revenge,” and large crowds assembled in various Iranian cities screaming death threats to Trump and expressing their hatred for Americans. Whatever the views of other forces in the West and in southwest Asia are of Soleimani, it is a fact that he has probably done more than anyone to contribute to the defeat of ISIS, Daesh, al Nusra, al Qaida etc., and represents a national hero in the eyes of the Iranians. As is also to be expected, various Iranian proxies in the region have immediately promised revenge actions, while the Iraqi Government has announced it will introduce legislation in the Iraqi parliament on Jan. 4 to end the legal basis for the American military presence in Iraq.

Given the extreme complexity of the history of southwest Asia in terms of ethnic and religious strife, the century-old manipulations by (primarily) the British Empire with the Great Game against Russia, and with the entanglement in this region of all the world’s nuclear powers, there is no question but that this present escalation has the potential of getting completely out of control, no matter what the forces involved in the coup against President Trump may think. If there is anything one can learn from military history, it is the recognition that wars almost never go as planned. If people would have known how World War I and II evolved, they would not have started them. Before any further escalation between the US, Iran and their proxies occurs, all peace loving people in the world should support an immediate summit among the Presidents of the US, Russia and China, now, in the spirit of the Meeting at the Elbe.

It is clear, that among the three presidents, President Trump—who promised to end the endless wars and has already taken several steps in that direction—and Presidents Putin and Xi, there is the intention and the capability to outflank the maneuvers of the war-mongers and to establish a higher level of cooperation. That potential is the reason that the coup—Russiagate and now the Impeachment—is being orchestrated against Trump. It is now the time for those three outstanding leaders to fulfill the potential that historical providence has bestowed upon them.

In 1999, Lyndon LaRouche warned in a national television broadcast “Storm Over Asia” that the western-backed jihadist mercenary forces unleashed in the 1970s, were created as part of a global strategy to undermine the major powers of China, India and Russia. These mercenary wars, if not stopped, LaRouche warned, would leave these major powers no other option but to defend themselves against these mercenaries and their sponsors, potentially leading to a World War III scenario.

Over twenty years old, this keystone presentation by Mr. LaRouche is still fundamental for understanding the present geopolitical dynamics shaping the planet today.

Here are some important statements about the Iran situation, seen from a global perspective.

The US unwittingly helped create Qassem Soleimani, then they killed him, by Scott Ritter

Scott Ritter is a former US Marine Corps intelligence officer. He served in the Soviet Union as an inspector implementing the INF Treaty, in General Schwarzkopf’s staff during the Gulf War, and from 1991-1998 as a UN weapons inspector.

The British Creation and Control of Islamic Terror — The Background to China’s Defeat of Xinjiang Terror, by Mike Billington

Mike Billington is a long-time associate of Mr. LaRouche. This excerpt from a recent discussion provides the history of British sponsorship or terror in Southwest Asia.

Did Donald Trump Light the Fuse on a New Middle East War?, by Larry Johnson

Larry C. Johnson is a former analyst at the U.S. Central Intelligence Agency.

Below is an excerpt from the latest memo from the Veterans Intelligence Professionals for Sanity, a group of former military and intelligence officers founded by former CIA analyst Ray McGovern. The letter excerpted below is posted on Consortium News.

VIPS MEMO: Doubling Down Into Yet Another ‘March of Folly,’ This Time on Iran

January 3, 2020
MEMORANDUM FOR: The President
FROM: Veteran Intelligence Professionals for Sanity (VIPS)
SUBJECT: Doubling Down Into Another “March of Folly”?

“The drone assassination in Iraq of Iranian Quds Force commander General Qassem Soleimani evokes memory of the assassination of Austrian Archduke Ferdinand in June 1914, which led to World War I. Iran’s Supreme Leader Ayatollah Ali Khamenei was quick to warn of “severe revenge.” That Iran will retaliate at a time and place of its choosing is a near certainty. And escalation into World War III is no longer just a remote possibility, particularly given the multitude of vulnerable targets offered by our large military footprint in the region and in nearby waters.

“What your advisers may have avoided telling you is that Iran has not been isolated. Quite the contrary. One short week ago, for example, Iran launched its first joint naval exercises with Russia and China in the Gulf of Oman, in an unprecedented challenge to the U.S. in the region.”