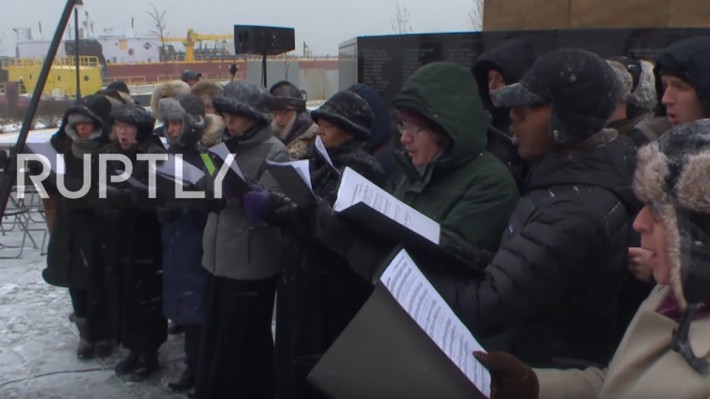 Founder and President of the Schiller Institute, Helga Zepp-LaRouche issued the following message:

In the name of the International Schiller Institute, I wish to express our deep condolences for the tragic loss of the the 92 human beings who died in the plane crash on the way to Syria. This accident is all the more a cause for sadness, as the music and patriotic spirit characteristic of the members of the Alexandrov Ensemble would have brought a message of hope to the people of Syria. This is a population victimized by more than five years of the criminal policies of regime change and treated as the pawns in a geopolitical game in complete violation of their sovereignity.

The Alexandrov Ensemble has been an expression of the highest moral values of Russia and, like classical choral singing in general, speaks to the soul and the creative potential of the audience. It is therefore extremely important that Russian Defense Minister Sergei Shoigu announced that he is initiating auditions to pick the best talents to fully restore the Alexandrov Chorus.

The training of the singing voice is important for everybody, since a well-placed voice can express the creative intention of the composer and directly speak to the same faculty in the audience. It represents, therefore, an irreplaceable element of the harmonious development of the character. Let me therefore share with you the idea that, in addition to rebuilding the Alexandrov Ensemble, thousands of Alexandrov choruses be established in schools all over Russia to honor the heroic contribution of Russia in the liberation of Syria and, at the same time, broaden the uplifting effect of choral singing to the young generation.

There is a New Paradigm in the process of becoming as exemplified by the integration of the Eurasian Union and the New Silk Road Initiative, establishing a completely new kind of relations among nations. We need a dialogue of the best tradtions of each culture for this New Paradigm to grow into a new era of civilization—the knowledge of the best of another culture will lead to a love for it, and therefore supercede xenophobia and hatred with more noble emotions. In this new era, geopolitics will be overcome forever and the dedication to the common aims of mankind will establish a higher level of reason. It is a reason for consolation for all of us, that the tragic death of the victims of the plane crash contribute with their immortality to the building of that better world.

Musical Offering to the Alexandrov Ensemble and the People of Russia

Members of the NYC Schiller Institute Community Chorus sing the Russian National Anthem outside the Russian Consulate in New York in honor of the passengers, many of them members of the Alexandrov Ensemble, who died when their plane crashed enroute to Syria, Sunday, December 25, 2016.