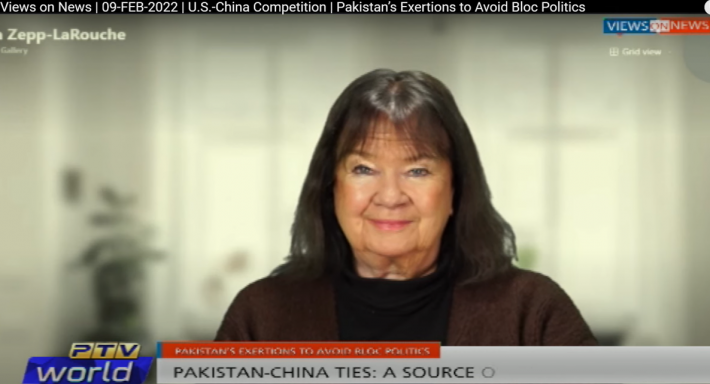 {This transcript includes only the exchanges between host Rehman and Mrs. Zepp-LaRouche. The whole program is available at this link.}

Rehman began his discussion describing a special interview PTV did with Prime Minister Imran Khan and the issue that Pakistan has to both have good relations with the United States and with China, but also avoid “bloc politics” with either one of what he described as the two competitors.

FAISAL REHMAN: Let me also bring in the lady in the conversation, Helga Zepp. Now, Helga, looking at the current situation, I’m not going to put this question from the Prime Minister’s perspective, but generally speaking, somebody who’s a scholar, somebody’s doing research, sitting in Europe, when they look at Pakistan, obviously, over a period of time it seems that Pakistan has been like a pendulum, but now the shift is very clear, and that is towards the Chinese, whether it’s about the dependency on the military hardware or it’s about the education, because normally most of these students used to go to United States of America, or to U.K., or perhaps Australia—the Western world in particular—for their education, but now a lot of them are going to China. So there is a shift. English was always a language in which we studied, but now Mandarin has become the mandatory course in so many schools, and in private education institutions as well.

So things are changing. Now we see the dominance of China, whether it’s about the culture or otherwise, it seems to be prevailing on Pakistan. Your take, Ma’am?

HELGA ZEPP-LAROUCHE: First of all, I’m very happy about the initiative of Prime Minister Imran Khan, because Pakistan is a middle-sized country, and he completely understands that if Pakistan puts its weight to become sort of a mediator between United States and China, this can actually be world historic, because we are in an incredibly dangerous situation. You mentioned, or there was the article in the Pakistan press today, that the Prime Minister wants to not go into a new Cold War—I mean, we are in a Cold War, and we are actually in the danger that this may become a hot war! The Doomsday Clock of the Bulletin of the Atomic Scientists again stated for the third time that we are 100 seconds away from a nuclear catastrophe. And if you look the extreme tensions around Ukraine, where President Putin was talking with President Macron yesterday, six hours, warning that Europe should not be drawn into a war, which would become nuclear by necessity. The same thing with China and especially Taiwan, where the leading scholars have already said that the U.S. encouragement of the independence of Taiwan has crossed the red line of China already several times. So we are sitting, really, on a powder keg.

And that’s why I think the initiative of Imran Khan is so important. Because I think Pakistan can turn a supposed weakness into a strength: And what I mean by that, is that the situation in Afghanistan, which is an absolutely unprecedented humanitarian crisis, where 1 million children under the age of 5 are about to die as we are talking, here. This is the judgment of the German representative of UNICEF, who said if these 1 million children would be in Germany, they would be in the intensive care units, and there are no medical facilities in Afghanistan to take care of that.

Now, if this happens, and 24 million people in Afghanistan would not survive the winter, who would it fall back on? It would fall back on the United States and NATO, because, when they in a rush, went out in August, they all knew—and Imran Khan has said this to a meeting of the Organization of Islamic Cooperation, the OIC, recently—everybody knew that with the cutting off of the donor money, the Afghan budget was cut by 80%; and naturally, the economy completely collapsed. And right now, there is no food, 98% of the people are hungry every day, about 95% are cut off from medical supplies: So, if this turns out to be the greatest genocide in history, recently for sure, it will fall on the United States. And I think that cannot be in the interest of the United States to let that go. So, if Pakistan, which I think has a strong position in that, because you are affected if there are refugees coming from Afghanistan; you already had to suffering incredibly huge economic hardship as a result of developments in Afghanistan; you know, it would destabilize the country.

So, I think if you, Pakistan, with the help of Prime Minister Imran Khan, would somehow draw the United States into helping in the humanitarian crisis, and work together with China, I think that that could become the stepping stone for overcoming the strategic conflict between the United States and China on a strategic picture, because if both countries would help in a very visible way, in the small by saving the Afghan people, it would solve two problems: It would solve the problem of the humanitarian crisis, because you need the two strongest economies in the world to solve this—together with the Europeans, I hope—but it would also be a stepping stone in bridging the strategic conflict. And therefore I think this move by Prime Minister Imran Khan is a stroke of genius, and this should really be brought to the highest level of the international community, that Pakistan is cementing this collaboration between the United States and China, in helping Afghanistan. That’s how I look at it. …

REHMAN: Very important question. Let me put this to Ma’am Helga. Now, Ma’am explain to us the situation, because I think the Europeans have always been used by the Americans, I would say, whether in the name of rescuing in the name of the Second World War or the First World War, but interestingly, when you talk about the NATO forces and the European Union, now, after the exit of Americans from Afghanistan there was a lot of hue and cry within the ranks of the European leaders, and they believed that they were not even informed, not even told, and it was a unilateral decision by the Americans to withdraw their forces and to leave Afghanistan. And again, when you look at the Ukrainian crisis, the problem is still there. Now, it’s the role of the Europeans, because as far as economy is concerned, they have a lot of dependence on Chinese, and on Russians, whether you talk about energy or otherwise. Now, where do you see the tilt of European countries, because we saw the French President Macron meeting with Vladimir Putin; we saw other leaders getting in touch with him. But that man means business. Now the role of the European Union is going to be very important. Do you believe that there is a difference of opinion within the ranks of the European leadership, or, perhaps, the tilt is towards the Americans; or is it because of the sheer pressure of the Americans that the European leaders can’t do much on their own? Your take, Ma’am.

ZEPP-LAROUCHE: The pressure of the United States on Europe is enormous, there is no question about it. But I think we should not underestimate the really incredibly historic meeting which took place between Xi Jinping and President Putin during the Olympics, where they concluded—I think the previous speaker already mentioned it—they agreed to a new strategic partnership without limits, the best ever, a new model for international relationships. Now, this is a 16-page document, which I think is incredibly rich in its implications. It basically means that the economic power of China which right now is, in one sense the dynamic is absolutely in the direction of China, because they have 8% GDP growth last year and the West was shrinking; it puts together the economic power of China and the military power of Russia, which is a little bit strategically ahead, because in the field of hypersonic missiles, in the field of hypersonic cruise missiles, in the field of nuclear powered submarine, they have a margin of superiority which the United States will only have in maybe two years or three years, but in the meantime, Russia and China are collaborating in many also military fields.

So this is a new factor. I think this strategic meeting between Xi Jinping and Putin has ended the unipolar world. And while it takes politicians and leaders of state and media a while before this reality sinks in, I think this is a new reality, and you can see by the fact the Europeans right now are completely scared about the possibility of the Ukraine crisis going out of control, and they’re trying to put a new model on the table, “Finlandization of Ukraine.” Now, Finlandization had a bad connotation in the end of the Cold War, but it is actually fitting with the Ukrainian history, because in 1991 when the Soviet Union and the Warsaw Pact disintegrated, Ukraine was a sovereign country. And for Ukraine to become a new Finland, not belonging to either Russia nor belonging to the EU or NATO, makes a lot of sense, because it would put sort of a buffer between these two. This, I think, is in motion, and I think there is high-level, very active diplomacy going on right now to accomplish that.

But I would suggest that something else is needed. We are really right now at a branching point of all of history, and I think we need a new model of international relations, where the thinking in terms of geopolitics, in terms of blocs, in terms of one against the other, the zero-sum game, has to be overcome. And I think the conception which is proposed by Xi Jinping all the time about the “shared community of the one future of humanity,” that is reality.

Because as we saw now, in this recent military maneuver, “Global Lightning,” this is unbelievable! At the height of the Ukraine crisis, there was new U.S./NATO maneuver which is exercising a prolonged nuclear war! I mean, that’s an insane idea right at the beginning, because it is based on the idea that you have a nuclear strike by one or the other side; then this is absorbed, then there is retaliation, another nuclear strike; then you go to cyberwar, they throw a couple of neutron bombs, because supposedly this evaporates radioactive radiation quickly; then you use electromagnetic directed energy weapons, and space weapons—this is insane! I looked at this “Global Lightning” as far as you can look at it, because it’s very classified, but I read what some experts were writing about it. And I think we have to move away from being on the brink of the extinction of civilization, because this really where we are at. And that’s why I think the initiative of Prime Minister Imran Khan [overtalk] is so…

REHMAN: …this is what everybody is so afraid of. But unfortunately, I’m sorry, Helga, we’re totally running out of time. But it was a pleasure having you on the show, thank you so much for your time. And that’s all we have: I’ll see you Inshallah tomorrow….