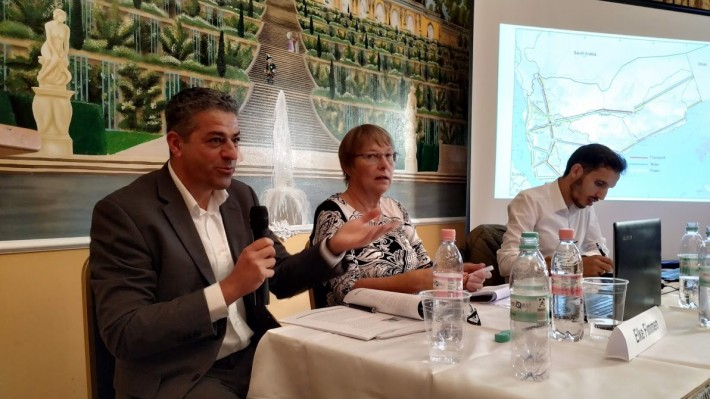 On Oct. 13, the Schiller Institute and  INSAN for Human Rights and Peace organized a joint seminar in  Berlin on “A Future for Yemen: Instead of Geopolitical Destruction — A New Paradigm for Reconstruction and Development with the New Silk Road for Southwest Asia and Africa.” Sixty people attended the half-day event, both German contacts and members, and Yemeni INSAN activists, among them many youth. It was a truly moving event, as the horror and humanitarian disaster was contrasted with the beautiful vision of reconstruction as worked out in Operation Felix by Hussein Askary, who attended as a speaker. His remarks gave people a true spark of the sublime — that it is possible to save humanity in the current breakdown of the old, dying global system and to take the future into one’s own hands.

After a short greeting by Elke Fimmen, a Schiller Institute chorus of Berlin and Dresden members sang {Dona Nobis Pacem}, to great effect on the audience. Elke then read Helga Zepp-LaRouche’s special greeting to the conference; followed by Aiman Al Mansour, who introduced the aim of his organization INSAN — INSAN means human being — and appealed to everybody to open their heart and soul, and consider mankind as a whole, giving the victims of the present genocide in Yemen a voice.

Helga Zepp-LaRouche called the events in Yemen a crime against humanity, with the Western governments and media being accomplices in it. When people said, after the Nazi Holocaust, that they did not know about it, today nobody can claim he or she did not know what is going on, even with the scarce reports. With 18 million of Yemen’s 29 million people threatened by famine, among them millions of children, Western governments continue to deliver weapons to Saudi Arabia. Now, with the likely murder of Saudi opposition journalist Jamal Khashoggi, U.S. senators talk about the Magnitsky Act. “But for each child dying of hunger in Yemen the Magnitsky Act must be applied!” Nevertheless, there is reason for optimism, because China’s Belt and Road policy has changed the strategic situation already, and this means also a concrete perspective for the reconstruction of Yemen in the near future, as can be seen in Syria and the Horn of Africa. She ended by saying, “Let us be warrior-angels in Friedrich Schiller’s sense and fight for a better order for all of humanity, which is in cohesion with our true identity as one mankind. Nobody in this world is secure, unless the people of Yemen are not secure and cannot realize their potential for happiness.”

After this introduction, in the first xsession, presentations were given by representatives of INSAN:
On the consequences of the catastrophic humanitarian situation in Yemen (Abdullatif ElWashali); a very dramatic picture by psychiatrist Dr. Hussein Al-Warith on the psychology of war trauma among children in Yemen and the difficulties to deal with it. How can these children contribute to rebuild their country in the future? Finally, Mohammad Abo Taleb spoke on the consequences of the blockade. Engeline Kramer, a long-time peace activist with a personal connection to Yemeni students, blasted the German government’s non-position on this horrible war.

The first part of the seminar was ended with a discussion and a short video on the school bus massacre of 40 school children on Aug. 9, by a missile built by Lockheed Martin and launched by the Saudi “coalition.”

After the break, Elke Fimmen spoke on the strategic situation and the need to replace the bankrupt old order with a new paradigm, asking the question “Is mankind morally fit to survive?” She attacked today’s culture of death, from which we have to free ourselves and build a beautiful future.

After an overview video on the damage done in Yemen, Hussein Askary then presented Operation Felix, the reconstruction plan for Yemen in the context of the New Silk Road. He first described (as in his June 30-July 1 Schiller Institute conference speech in Bad Soden) the history of why Yemen was the poorest country in the region all along, and said that, before the war, nothing had been invested into the real economy and agriculture in decades, due to the IMF/World Bank policy, and the idea that earning money from oil exports would be enough.

So, when the war started, the country was basically lost.

Askary then presented Yemen’s position on the crossroads of the Belt and Road and showed the plans for the main development corridor projects for Yemen, especially the North-South railroad from Saa’da to Aden, which, concerning the very mountainous territory, is comparable to the one in Ethiopia, which China is building and plans to complete within four years. He stressed that it will be mostly up to the intellectuals and to the youth — who make up 50% of the present Yemeni population — half of them under 18 years old! –to build the country’s future and learn from the lessons of the past.

Askary’s appeal to have a clear vision for the future, so you can fight for it, clearly struck a response with those attending. One of the points made in the discussion was the need to make this project known to a broader population in Yemen, to give people a vision in this horrible situation, which can remoralize them; there was also discussion on how to sustain such a program in the longer run, so that one is not dependent on the outside. All of this led to an extremely fruitful and frank discussion. People expressed afterwards their gratitude for the seminar. Especially some of the young people were visibly excited about the perspective that Askary presented.

Here is the speech by Hussein Askary: