Zepp-LaRouche on CGTN: “Fostering Cooperation in a Fragmented World” 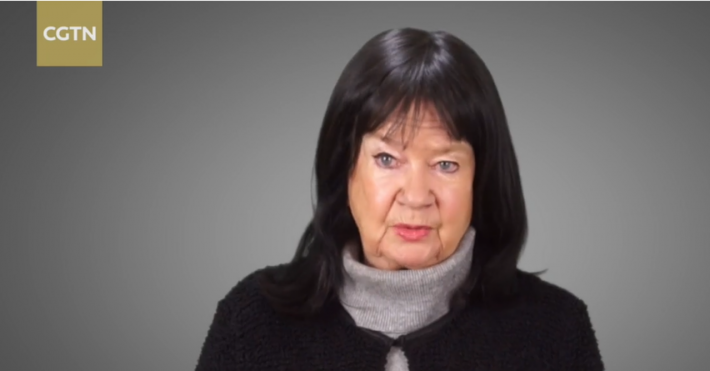 Zepp-LaRouche on CGTN: “Fostering Cooperation in a Fragmented World”

Jan. 18, 2023 (EIRNS)–CGTN today published on its English-language YouTube channel (which has about 3 million subscribers) a 14-minute video commentary by Schiller Institute founder Helga Zepp-LaRouche, on the occasion of the Davos World Economic Forum. CGTN’s introductory blurb asked the question: “How should world leaders work together in a volatile situation? Join Helga Zepp-LaRouche, founder and president of the Schiller Institute, to explore these talking points.” The video can be found here.

The world economic forum has given its annual meeting the title “Cooperation in a Fragmented World,” and shortly before the Forum published their Global Risk Report, in which they present the results of the latest Global Risk Perception Survey.  In that, they consider the current crisis, then the expectation of what many experts think will come out in the short term (two years), the most severe in the long term (ten years), in terms of the economy, the environment, society, and those geopolitical and technological risks that could become tomorrow’s crises.  Then they consider how these different crises could evolve into a “poly-crisis” by 2030.

Concerning the methodology used to come to their evaluations, they report that they interviewed over 1200 experts from academia, business, government, the international community, and civil society between September 7th and October 5th, 2022.  In other words, this Global Risk Report is not based on scientific methods, but rather on an Aristotelian method to arrive at the common denominator of the opinions of selected experts.

While there will also be attendance from countries of the Global South, who may try to set different accents, the World Economic Forum represents a good portion of the top global corporate establishment; and they clearly try to continue to push their agenda, which is an acceleration of the Great Reset, that they have been pushing before.  It completely leaves out the optimistic perspective, for example, of the circa 150 countries working with the Belt and Road Initiative and their optimism that through investments in infrastructure, agriculture, industry, and international scientific cooperation, etc., most of the problems they insist will dominate the next years can be overcome.

Instead, there is a lot of talk about “progressive tipping points” and “catastrophic outcomes,” which are all designed to motivate the assembled business leaders and beyond, to adopt the program fitting the financial interests of the main financial players of the neo-liberal system.  For example, in the section called “Natural Ecosystems; past the point of no return” they write:

“Human interventions have negatively impacted a complex and delicately balanced global natural ecosystem, triggering a chain of reactions.  Over the next ten years, the interplay between biodiversity loss, pollution, natural resource consumption, climate change, and socioeconomic drivers will make for a dangerous mix.

“Given that over half of the world’s economic output is moderately to highly dependent on nature, the collapse of ecosystems will have far-reaching economic and societal consequences.  These include increased occurrences of zoonotic diseases, a fall in crop yields and nutritional value, growing water stress exacerbating potentially violent conflict,” etc., etc.

The deep Malthusian pessimism reflected in such a statement makes clear that this report is more a program of their intent than a scientific prognosis.  Because of human interventions, the world population has increased from a few millions after the last Ice Age to 8 billion.  If there will be a fall in crop yields, then [it will be] only because of the Green demonization of modern agriculture.  And if there will be a violent conflict, then only because the necessary development of new fresh water resources will be blocked by the Malthusian environmentalist agenda.

Unfortunately, I think that 2023 will see an escalation of the financial and economic crises.  The central banks have tried to curb inflation by raising the interest rates rather rapidly.  Then, as we could see for example in Great Britain, they had to suddenly go from quantitative tightening to quantitative easing again, because of the danger of a chain reaction of over-indebted firms; thus going back to the inflationary money pumping.  Since the tendency towards hyperinflation is the result of ever more monetarist policies going for profit maximization at the expense of physical economy and the reckless liquidity injections following the systemic crisis of 2008 by the trillions of dollars, euros, and pounds, only an end to the casino economy could solve the problem.

What should be put on the international agenda is the reintroduction of a Glass-Steagall banking separation, which puts the commercial banks under state protection, but forces the investment banks to straighten out their balance sheets on their own without taxpayer money.  Then, each country must create their own national bank, because credit creation must be under the sovereign control of the governments.  These national banks must then cooperate to create a new credit system, which is only devoted to investments in projects serving the common good of the people.  There are already efforts going on in this direction among many countries of the Global South — also, to create a new international currency.

While it is very difficult to predict the exact time when the systemic crisis of the neo-liberal system will come to a head, it cannot be excluded that the decision to have a complete reorganization of the international financial system could force itself on the agenda in this year of 2023.

Right now, unfortunately, the crisis over Ukraine — which is not a crisis between Russia and Ukraine, but between NATO and Russia — is accelerating in a dangerous way.  I think it is extremely urgent that a diplomatic solution is found quickly to end the war.  There are various efforts, like Pope Francis has offered the Vatican as a venue for negotiations, and I and a group of Latin American legislators have written an open letter to the Pope to mobilize people around the world to support this idea.  We are also asking people to sign that letter.  Also, President Lula from Brazil has been asked to mediate by several countries from the Global South; and also President Erdogan from Turkiye has made some efforts.

I think all of these proposals should be merged, because too much is at stake.  But, I think because the crisis around Ukraine is so dangerous, the initiatives made by President Xi Jinping with the Global Security Initiative, together with the Global Development Initiative are probably the most important angle to solve the crisis.  The Global Security Initiative is really a proposal for a new international security architecture, and obviously that must take into account the security interests of every single country on the planet for it to work.

I am aware that right now it does not look very likely that the countries of the so-called West would be willing to discuss such a new international security architecture, given the fact that NATO is trying to become Global NATO, and Japan and Great Britain have just signed the so-called “Reciprocal Access Agreement,” and the US, the UK, and Australia have signed the AUKUS pact.  But the BRICS countries already have a higher GDP than the G-7; and 17 countries of the Global South are applying for membership in the BRICS.  So, they are in the process of representing the vast majority of the human species.  And the countries of the Global South have made it quite clear that they don’t want to be drawn into a geopolitical conflict between the West on the one side, and the China and Russia on the other side.

I think it is therefore quite possible that in the course of 2023, the financial crisis erupts even more dramatically, and that that will be the right moment to put the combination of the Global Security Initiative and the Global Development Initiative on the international agenda.  I think President Xi is very right that security can only exist if there is development.  So, I am sure that the vast majority of the countries who are striving to overcome the relics of colonialism, and who really want to develop into become modern and prosperous countries, would support such an intervention.

And then hopefully, the countries of the West can see that it would be in their best interest to cooperate with the Global Security Initiative, the Global Development Initiative, and the Belt and Road Initiative.

Global Risks in the Next Two Years

There are policy initiatives which can overcome the inflation by reorganizing the financial system, by addressing the root causes for the crisis.  The excessive profit orientation at the expense of the physical economy clearly did not work.  And what the World Economic Forum calls the geo-economic confrontation can be stopped the moment these CEOs recognize that win-win cooperation with the majority of the countries in the world would also be in their best interest; since to cooperate with growing markets with billions of people with growing buying power is for sure better than to go bankrupt in a crash.  And the best way to cope with natural disasters and extreme weather events is to invest in basic infrastructure, water management, and scientific and technological progress in order to develop the technologies to have early warning systems, secure housing construction, and other means of adaptation.

Disagreements on Cybersecurity in Major Countries

There have been various attempts to have agreement between major countries on cybersecurity.   There was an agreement for example in 2013 between Russia and the United States to establish a secure phone connection, and a working group to mitigate cybersecurity threats.  In 2017, in light of the allegation of election interference made against Russia, Trump and Putin agreed to create a cybersecurity unit to prevent election interference and other cyber threats.  Trump praised it as a big step forward, but was forced to backtrack only 12 hours later, due to massive pressure from Congress and the mainstream media.  Then, in preparation work for the 2018 meeting in Helsinki between Trump and Putin, Russia offered the United States cooperation in the field of preventing cyberattacks on critical infrastructure — power plants, water supply and transport management systems, hospitals, banks, and so on.  The corresponding provision was included in the joint statement of the Presidents of the two countries prepared by the Russian side for adoption at the summit in Helsinki.  While the summit between the two Presidents worked well, all hell was unleashed against Trump afterwards by the same forces, and the agreement was not signed.

At this point, the trust between the West and Russia and China is at an historic low point.  Under these circumstances, an isolated agreement on cybersecurity seems very unlikely.  Therefore, a great vision is required on how a solution can be put on the table which addresses all the major problems together, such as a new, just world economic order based on such concepts as the Global Security Initiative in combination with the Global Development Initiative.

I think that we have reached a point in the history of mankind where we really must get serious about the international order of relations among nations, and how we can organize them in such a way that we can self-govern as a species which is gifted with creative reason.  In an existential crisis, [such] as the one we are experiencing right now, and which is very likely going to get much worse, it is not the amount of money one owns that counts; but it is the quality of political leadership of exceptionally wise and moral men and women who have the ability to shape the future for the benefit of all humanity.

In Davos, there will be a great number of billionaires, millionaires, and hangers-on to power.  It will be very interesting to watch if they are also up for the larger job required.