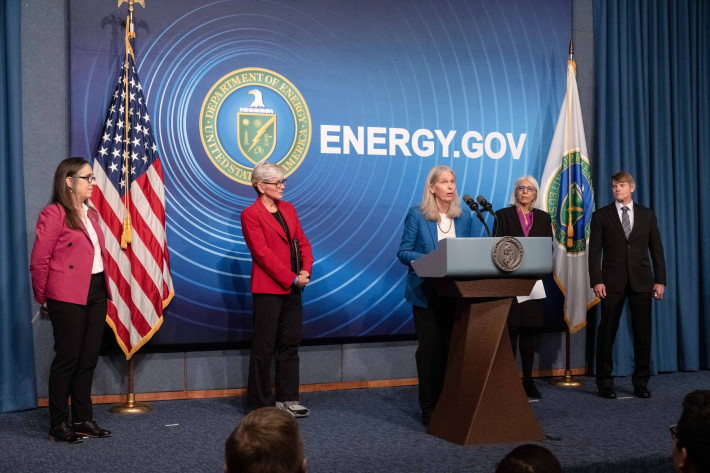 December 15, 2022by madeleine in General

The result reported in an Energy Department/National Nuclear Security Agency press conference Dec. 13, followed by a technical panel of NIF team leaders, was an ignited plasma fuel with an output power gain of 50% over the input laser power–not 20% as had been reported in media leaks Dec. 12. This was a very large improvement over the August 2021 shot, which was a {huge} (25x) improvement over any previous experiments there. Moreover, Dec. 5 was the first net gain in the worldwide history of fusion power R&D.

The energetics of the experiment – which also make clear fusion energy will not be commercialized with this kind of set-up – were given as: “wall outlet power” for the laser array, 300 megajoules; laser input power delivered to the target fuel, 2.05 megajoules; output from ignited fuel, 3.15 megajoules. All in part of a nanosecond. (Note extremely low 0.6% power efficiency of the laser array.)

The key innovation which has probably advanced the NIF experiments of the past two years more than any other – namely, the use of an electric coil to surround the laser-imploded fuel pellet {with a strong magnetic field as it explodes} – was never mentioned by any director or team leader in the 75-minute presentation of the results. This, despite a {Physical Review Letters} article on just that subject published Nov. 4, 2022. The lead author and the innovation’s originator, John Moody, wrote, “The application of an external 26 Tesla axial magnetic field to a D2 gas-filled capsule indirectly driven on the National Ignition Facility is observed to increase the ion temperature by 40% and the neutron yield by a factor of 3.2 in a hot spot with areal density and temperature approaching what is required for fusion ignition.” This was written {before} the Dec. 5 experiment’s much better result.

Why did no one mention this? Perhaps it is irrelevant to the reason for existence of this ICF program at Livermore: To analyze U.S. nuclear warhead performance without nuclear weapons tests. The program will get $641 million in the Fiscal 2023 NDAA –by Chuck Schumer’s efforts according to him–while most fusion R&D now depends on private funds.

If a serious national fusion energy development program were launched, this successful step in “hybridization” of magnetic and inertial confinement fusion would be of great importance. (One might say the idea is “as old as the FEF,” or older.) But apparently not, if improving U.S. warheads for possible nuclear exchanges with other powers is the reason for the United States government funding fusion research.

Other institutions involved in the NIF work at LLNL are: DoE’s Los Alamos National Laboratory, Sandia National Laboratories and Nevada National Security Site; General Atomics; academic institutions including the University of Rochester’s Laboratory for Laser Energetics, the Massachusetts Institute of Technology, the University of California, Berkeley, and Princeton University; international partners including the UK’s Atomic Weapons Establishment and the French Alternative Energies and Atomic Energy Commission.