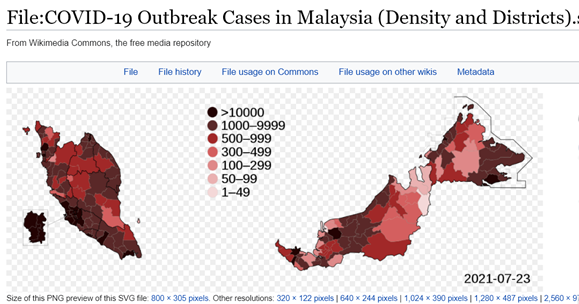 July 22, 2021 (EIRNS)–Indonesia now has the world’s highest COVID-19 infection rate and death rate, while other Southeast Asian countries are also facing a dangerous spike and a lack of adequate medical capacity.

* INDONESIA surpassed India’s peak per-capita death rate at 4.17 per million, compared to India’s peak of 3.04. Wednesday saw the highest death toll thus far at 1,383, while reported new cases exceed 50,000 per day (but with little testing, the actual number is thought to be much higher). The government ordered the conversion of oxygen production to be 90% for medical purposes from 20% normally. About 14% of the population has had at least one vaccine dose, primarily China’s Sinovac.

* MALAYSIAN hospitals are terribly overcrowded. AP reports that the national lockdown measures, which have badly damaged the economy, have not stemmed the infection rate of more than 10,000 daily. About 15% of the population is fully vaccinated, and the government hopes to have a majority vaccinated by the end of the year. The death rate per million is close to that of Indonesia, at 4.02.

* MYANMAR is still in a state of social chaos since the coup in February and the mass demonstrations — and mass killing of demonstrators by the junta. Now the pandemic is sweeping the country with few reliable statistics. The ASEAN Parliamentarians for Human RIghts (an organization opposing the junta) reports in a statement: “With little testing capacity, low numbers in the country vaccinated, widespread shortages of oxygen and other medical supplies, and an already beleaguered health care system under increasing strain, the situation is expected to get increasingly worse in the coming weeks and months.” It is believed that only 3% of the population has been vaccinated. The head of the department that oversees the cemeteries told military-run Myawaddy TV news on Monday that 350 staff members had been working three shifts since July 8 to ensure proper cremations and burials of people at Yangon’s seven major cemeteries, adding that they had cremated and buried more than 1,200 people on Sunday alone, including 1,065 who had died at home of COVID-19 and 169 who had died in hospitals.

AP reports that Cambodia and Thailand have also seen strong increases in both coronavirus cases and deaths, but have thus far held the seven-day rate per million people to a lower 1.29 and 1.74, respectively.