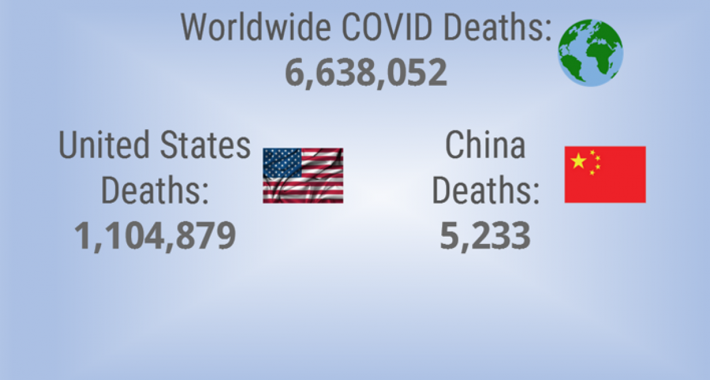 Further, since China is testing and tracking so closely, their medical results are even that much more impressive. COVID-19 deaths in China, zero for many weeks, zoomed to 6 in the last week. Compare this to the US in the last week losing around 2,000 people to the virus and Germany around 1,000. Per population, this would be equivalent in China to 8,600 and 17-18,000, respectively; making the performance of the U.S. over 1,400 times worse, and that of Germany 2,800-3,000 times worse — not quite the same ballpark.

What are called two sub-variants (BA.F and BA.5.1.7) of Omicron’s BA.5 variant broke out a month ago. Both sub-variants evade immunity, both from previous infections and from vaccines; and both sub-variants spread faster. So, by November 11, China’s CDC and their Center for Disease Control and Prevention updated their control protocols with 20 adjustments, and ten days later the spread seems to have stabilized.

The faster transmission rate impacted the actions required to both test and track. Some local officials over-reacted with too general, and sometimes unnecessary lockdowns; some did not move hard enough. So, Chinese health officials have sent teams to the regions to work out the bumps in the process. As Wang Liping, from China’s CDC, put it: “Epidemiological investigators, transport staff and nucleic acid testing personnel should cooperate and exchange information, so as to grab the golden window of opportunity of 24 hours to prevail over the virus.” In China, six deaths are a national emergency.