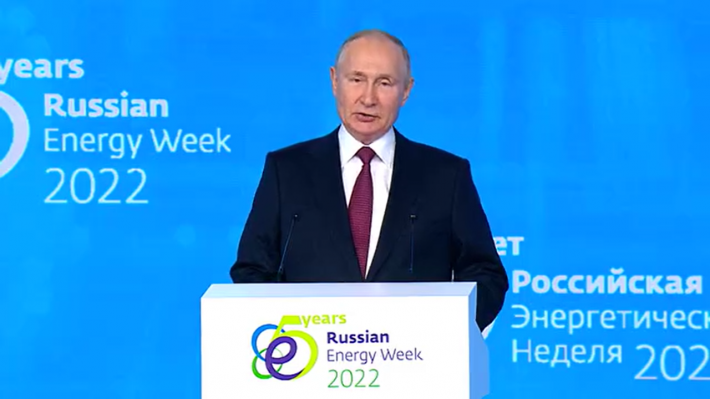 Oct. 12, 2022 (EIRNS)–Russian President Vladimir Putin did not beat around the bush. Addressing the annual Russia Energy Week today, he opened: “Such direct and transparent communication is essential now, when the global economy in general, the fuel and energy sector are in the middle of, let me be direct, an acute crisis due to unstable price dynamics of energy resources, an imbalance in supply and demand, and the overtly subversive actions of individual market participants, who are guided solely by their own geopolitical ambitions, resort to outright discrimination in the market, and if that does not work, they simply destroy the infrastructure of their competitors.

“In this case, I am of course talking about the sabotage of the Nord Stream 1 and Nord Stream 2 gas pipelines. There is no doubt that this is an act of international terrorism, the purpose of which is to undermine the energy security of the entire continent. The logic is cynical: to destroy and block cheap energy sources, hence depriving millions of people, industrial consumers of gas, heat, electricity and other resources and forcing them to buy all this at much higher prices.

“The attack on the Nord Streams has set an extremely dangerous precedent, which shows that any critical piece of transport, energy or communications infrastructure is under threat, regardless of its location, management or whether it lies on the seabed or on land.”

CNN‘s failed to cover most of Putin’s opening, but they did note his energy offer to Europe: “Russia is ready to start such supplies. The ball is in the court of the EU. If they want, they can just open the tap… if, together with our European colleagues, we take the decision to supply gas through the remaining one link of Nord Stream 2. Apparently it still remains operational; unfortunately we are not allowed to test it.” [Putin’s speech can be found here.]