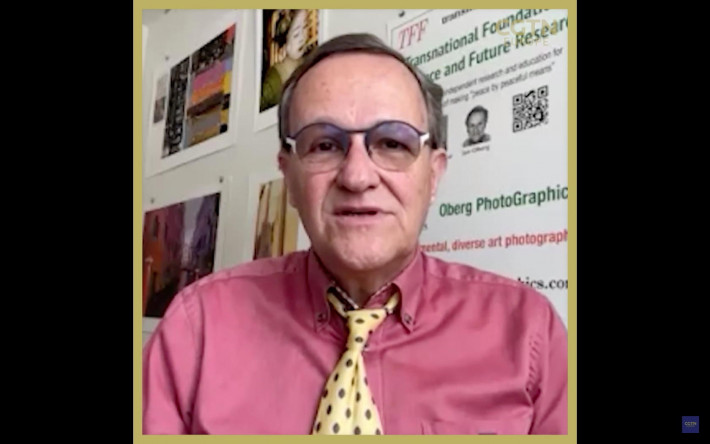 July 28, 2022 (EIRNS) Copenhagen–Today Danish peace policy leader Jan Oberg responded to being put on the Ukraine blacklist, issued July 14. He was a speaker at the Schiller Institute’s May 25, 2022, online conference from Denmark and Sweden, and three of the other speakers were also put on the list. His posting follows below and is available at this link.

Ukraine Smears People Around the world as Part of the Disinformation War
28 July, 2022

The government of Ukraine runs a Center for Countering Disinformation. It seems to be tasked with telling the world who carries the truth and who are spokespeople who are pushing a rhetoric that is in tune with Russian propaganda.

I’m included in a list issued by the Center together with around 70 people, many of whom I am honored to be grouped with. The Center published the list on its Facebook page with a rather weird text about how they have put us all in three categories: the third, for instance, “condemn Russian aggression, but inclined Ukraine to negotiate and oppose the supply of weapons to our state (20%).” Condemning Russian aggression and being in tune with Russian propaganda. Oh, well!

I suppose I am in that category since I distanced myself from the Russian invasion of Ukraine but also believe that the present arming of Ukraine is utterly counterproductive and will have unspeakably destructive consequences for Ukraine in particular. But, sadly, the US and NATO countries are united – so far – in (mis)using Ukraine as the battlefield to weaken Russia and “win” over it. That is, as a proxy – fighting for itself and Ukraine to the last Ukrainian. See my article on that here.

On the list are a series of diplomats, professors, politicians, media people and even former CIA people and some of them have already expressed their surprise at seeing themselves on that list – for instance, Edward Luttwak who has lobbied NATO governments to send weapons to Ukraine and is generally known as a hawk.

In summary, it is one of those intellectually and morally poor attempts, of course, to smear people who have a balanced view or are not 100% on your side. It’s based on a simple twofold table and not a fourfold table – as I say in the video below. The Center’s employees have no idea about how one makes a professional conflict analysis and choose to do what many do these days: Attack your position without understanding analytical content.

[Jan Oberg continues with a reference to his interview with RT about the list.]

Russia Today – RT – is the Russian equivalent to, say, CNN or BBC. But unless you have a proxy server, you cannot see their articles and programs because numerous Western countries have prevented access to it – in violation of your human rights, but that doesn’t bother them. They wanted to do a report and panel discussion and approached me as one of the participants. The other participant is Bradley Blankenship who is also on the Ukrainian list.

Let me be very clear – also with reference to my principled media policy: If a Ukrainian TV channel had done the same, I would of course be pleased to accept its invitation too. Let’s see whether they dare do a face-to-face with the people they have smeared on their list – best Joe McCarthy 1950 style.

I hope the link below works for you, if not here is the link to RT on Yandex: https://disk.yandex.ru/d/DGF7e1ijMBsJKw

You know, RT has been thrown out of YouTube…Enjoy!