Helga Zepp-LaRouche on Pakistani TV: We Must Find a Way To Get Peace, Immediately! 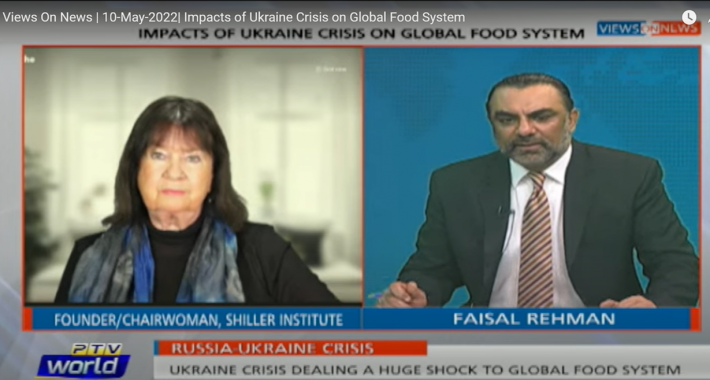 Helga Zepp-LaRouche on Pakistani TV: We Must Find a Way To Get Peace, Immediately!

May 10, 2022 (EIRNS)—Two diametrically opposed views on what could happen in the Russia-Ukraine conflict were presented on yesterday’s “Views on News” program on Pakistan’s PTV public television channel. One, presented by a guest Pakistani columnist, was the dominant “narrative” of Russia, the sole aggressor, the sole party responsible for a war which will last for a long time, devastating Ukraine in the process, but that’s the way it is, because Putin won’t give in.

Schiller Institute founder and chairwoman Helga Zepp-LaRouche countered forcefully, when given the floor:

“Most important, is to find a way to get peace, immediately, to not accept the idea that this will be a war which will go on for very long, because if that would happen— There are some people who think this war should go on until the last Ukrainian. This is a very cynical approach, because the main suffering people will be the Ukrainians.

“There is right now in Germany a huge debate which erupted because there were several open letters directed to Chancellor Scholtz, one coming from a group of intellectuals who warned that Germany should not send heavy weapons to Ukraine, because that implies the danger of the conflict going out of control and leading to World War III, and there is generally a recognition that if this comes to WW III, nobody will be left—nobody in Germany, nobody in Pakistan, nobody in the United States! So there is a growing momentum of people who say, ‘We must have a negotiated, diplomatic solution, immediately’.”

Geopolitical thinking, the idea of exhausting, of crushing Russia, of finishing off Putin, or that you keep fighting until your enemy is completely destroyed—this will lead to World War III! People should really think about that, Zepp-LaRouche insisted.

Nor is how the war came about as simple as the last speaker made it look, she noted. For 30 years, the Schiller Institute has been trying to shape events so as to bring about a new peace order, not commenting on what happens, but presenting such ideas as the Eurasian Land-bridge as the basis of peace. That potential for peace was destroyed by the drive for a unipolar world, with its color revolutions and regime changes against any government which would not accept that unipolar order. The West does have a share of responsibility for this crisis, in which, if Sweden and Finland join NATO, we could face again a reverse Cuban missile crisis.

Asked later by the host about such consequences from the war as growing malnourishment worldwide, Zepp-LaRouche urged governments to get together to set about doubling food production, to end the threat that 20% of the world’s people—1.7 billion souls— may fall into food insecurity and famine.

She counterposed the two systems developing in the world: the trans-Atlantic sector and those governments with neoliberal economic systems, which is blowing out, as Germany did in 1923; and Russia and China, which are responding to the West’s confrontational policy by trading in national currencies, setting up new banks and credit mechanisms. Much of the rest of the world —India, Indonesia, South Africa, even Brazil under Bolsonaro, Nigeria, among them—also refuse to go along with the West’s confrontation.

The danger, Zepp-LaRouche warned, is that if the West continues its confrontation, it may come to a break between the Western world and the countries gathered around Russia and China, which would be very dangerous, and an economic catastrophe, for Europe, for example. A different approach is needed! Governments must get together and agree to double food production. The U.S. could compensate for the loss of all Ukraine’s grain simply by cutting the amount of grain it burns in ethanol in half, and it should do that. Governments simply have to make available to farmers the credits, fertilizers, machinery they require to produce, and food production can be doubled.

The “Views on News” host, who had listened carefully, responded wholeheartedly: “absolutely.” The interview can be found here.