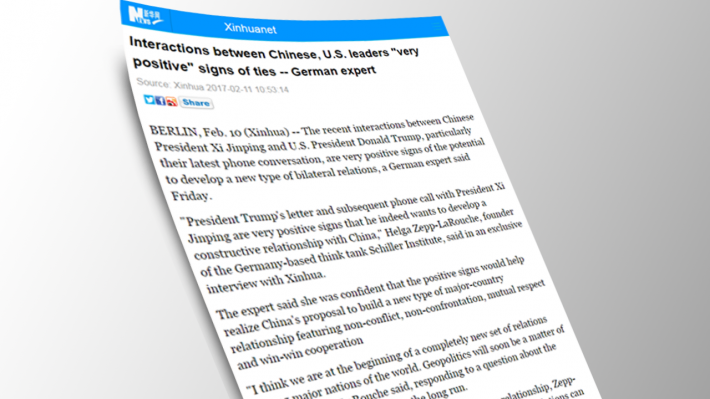 “President Trump’s letter and subsequent phone call with President Xi Jinping are very positive signs that he indeed wants to develop a constructive relationship with China,” Helga Zepp-LaRouche, founder of the Germany-based think tank Schiller Institute, said in an exclusive interview with Xinhua.

The expert said she was confident that the positive signs would help realize China’s proposal to build a new type of major-country relationship featuring non-conflict, non-confrontation, mutual respect and win-win cooperation

“I think we are at the beginning of a completely new set of relations among major nations of the world. Geopolitics will soon be a matter of the past,” Zepp-LaRouche said, responding to a question about the prospect of China-U.S. ties in the long run.

Reviewing the current dynamics in major-power relationship, Zepp-LaRouche believed that a new platform of international relations can be reached, based on win-win cooperation.

“This has the potential for a new era of mankind, the realization of President Xi’s vision” of building a community of shared future for humanity, she said. “A new paradigm, something I would call the adulthood of civilization, is within reach.”

In their phone conversation Friday, the first since Trump took office in January, Xi and Trump pledged to boost win-win cooperation in such areas as economy, trade, investment and international affairs, and develop a constructive China-U.S. relationship.